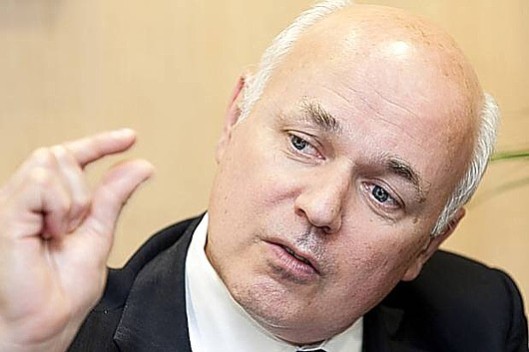 “Not even this much”: Iain Duncan Smith demonstrates how much he cares about the damage his policies are doing to public health, and to the public finances. (Image: Evening Standard)

When it comes to Iain Duncan Smith, it seems the point still isn’t being made forcefully enough.

So let us be perfectly clear: This man is a liability to the United Kingdom. He is costing this country billions of pounds with his failed pet projects like Universal Credit, his contracted-out work programmes that are more likely to hinder people looking for a job then get them into one, and even his enormous expenses claims – £39, just for breakfast!

Now it seems he has lied to Parliament – yet again. He told the House of Commons, and the country at large, that his Department for Work and Pensions expected to write off £34 million of investment in the IT systems being developed to administer his real-time, six-benefits-in-one Universal Credit. The actual amount, revealed to Parliament’s public accounts committee yesterday, is more like £161 million.

Not only that, but he was lying when he said he had been monitoring the project constantly. If that is true, then why was a civil servant’s personal assistant allowed to sign off contracts when the responsibility lay with himself, or at least his ministers?

Even more damning, it seems the DWP has spent the last six months sitting on this information, rather than actually doing anything about it!

And this odious little liar last week tried to blame the civil service for Universal Credit’s failure. He is a lower form of life than an intestinal worm.

He still thinks he can take the moral high ground, though – look at his attack on the United Nations’ Special Rapporteur on adequate housing, Raquel Rolnik, after she (rightly) denounced his bedroom tax as an attack on British citizens’ human rights.

He described her call to abolish the tax as “outrageous”, claiming that it undermined the impartiality of the UN. Isn’t it more accurate to say that she has revealed the truth, and now he is panicking?

He said he wanted UN secretary general Ban Ki-moon to investigate Ms Rolnik’s conduct – a line already pointlessly taken by Grant Shapps, all of whose claims were lies, as we discovered yesterday.

In the Daily Mail, he said she had not asked ministers or officials for their input, adding: “I find it staggering that without this official information Mrs Rolnik feels she is in a position to be able to properly prescribe what the future of the policy should be.” In fact, she met many officials and government representatives, all of whom are listed in her preliminary report.

So IDS – or RTU, as we like to describe him here (it refers to Army personnel who are Returned To Unit for failing to make the grade) – has lied again. And he joined a deeply dodgy cadre of Conservatives in denouncing her for – among other things – being born in a country with worse deprivation than the UK. Doesn’t that put her in an excellent position to point out the faults in our system?

But then, what can we expect from this vile creature. There are strains of syphilis with more charm and social grace.

Is the point made yet?

Back in May, Vox Political published ‘Iain Duncan Smith has committed contempt of Parliament and should be expelled’. That article has been read by more than 12,600 people who almost unanimously supported it. Now we see that he has shown the same contempt, to Parliament, to the British people, and now to a respected and senior United Nations representative. Go back and refresh your memory if you need to do so.

Is the point made now?

No, it probably isn’t.

The fact of the matter is that most people won’t care, because most people don’t think they are affected by the disasters Iain Duncan Smith is inflicting on us.

Just go back and consider the cost of all his mistakes: Billions of pounds wasted. Possibly tens of billions, when you consider the cumulative effect (although this would be a hard concept for him; he has resisted all attempts to get his Department to provide a cumulative assessment of his regressive changes’ effect on this country’s poor for many months, claiming it would be “too difficult”).

Tens of billions of pounds have been wasted on his so-called attempts to cut the benefit bill, while that bill has increased, year on year, because of his government’s policies.

As Adlai Stevenson said of Nixon (and the comparison to Nixon is well-deserved): “He is the kind of politician who would cut down a redwood tree and then mount the stump to make a speech for conservation.”

Why aren’t you demanding his dismissal in your millions?

70 thoughts on “The lies, the cost, the hardship… the price we all pay for Iain Duncan Smith”