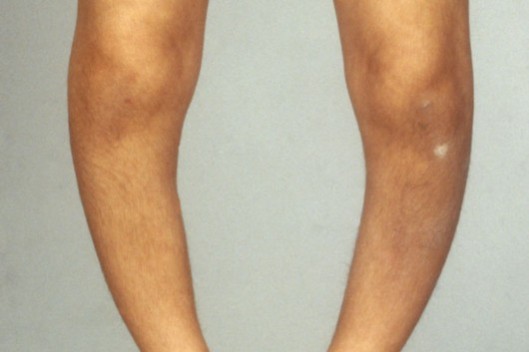 Painful deformities of the skeleton such as bowed legs: The return of rickets is another sign that the Conservative-led government is regressing Britain to conditions during the primitive Victorian era – or even earlier.

David Cameron’s quest to bring the Victorian era back to life in the 21st century reached a new milestone this week when the UK’s chief medical officer formally announced the return of a disease long thought banished from these shores: Rickets.

The announcement brings to fruition a prediction made by Vox Political almost a year ago, when we said: “As a consequence of the rise in poverty, overseen and orchestrated by Mr Cameron and his lieutenant Iain Duncan Smith in the Department for Work and Pensions, the classic poverty-related diseases of rickets and tuberculosis are on the increase.”

According to the NHS Choices website, rickets “is a condition that affects bone development in children. It causes the bones to become soft and malformed, which can lead to bone deformities.

“The most common cause of rickets is a lack of vitamin D and calcium. Vitamin D comes from foods such as oily fish and eggs, and from sunlight on our skin. Vitamin D is essential for a child to form strong and healthy bones.

“Rickets causes the bones to become painful, soft and weak. This leads to deformities of the skeleton, such as bowed legs, curvature of the spine and thickening of the ankles, wrists and knees.”

The disease was thought to have been eradicated in the UK but, in a damning indictment of modern political priorities, chief medical officer Dame Sally Davies has admitted that 40 per cent of our children – that’s two-fifths of all the children in the country – now have some kind of vitamin D deficiency. Current figures for full-blown rickets are not available.

“The disease was common in Victorian England, but largely disappeared from the Western world in the latter half of the 20th century thanks to vitamin D being added to everyday foods such as margarine and cereal,” stated a report in The Independent. “There has been an observed rise in cases in recent years.”

Can there be any doubt that this rise in cases has been brought about, not just by children sitting at home playing video games rather than going out in the sunlight, as some would have us believe, but because increasing numbers of children are having to make do with increasingly poor food, as Cameron’s policies hammer down on wages and benefits and force working class people and the unemployed to buy cheaper groceries with lower nutritinal value?

The Tory wage-crushing policy has been ignorant in the extreme, according to Dame Sally’s report, as it has created an extra burden on the NHS. Preventative measures “could save the economy billions”.

Dame Sally’s report is entitled ‘Our Children Deserve Better’ – echoing Ed Miliband’s Labour conference mantra, “Britain can do better than this” – and sets out recommendations to tackle urgent problems, such as a universal handout of vitamin supplements to all children under five for vitamin deficiencies, and measures to handle rising child obesity and a lack of effective mental health services.

The neglect created in our health system by more than three decades of neoliberal political rule has had a devastating effect on the nation’s children. According to Dame Sally, while our mortality rate for 0-14 year olds was among the best in Europe during the 1980s, it is now among the worst, with five more children dying every day than in the best-performing country, Sweden.

The highest death rates are in deprived areas – in the northwest, northern cities and some of London’s poorer boroughs, with 21.1 deaths per 100,000 people under 17.

Dame Sally said: “I think this is something, as a country, we should feel profoundly ashamed about – I do.”

The Vox Political article from December last year also claimed tuberculosis would return, and our report this week on the government’s plan to tackle the phantom problem of “health tourism” seems to demonstrate that it is hell-bent on ensuring that this comes true as well.

Our report earlier this week quoted the chair of the Royal College of GPs, Claire Gerada, who has warned that the cost of administrating the new system could outweigh the savings, while also increasing public health problems such as TB by deterring temporary migrants from seeking treatment when they first fall ill.

In the Bible, Jesus is quoted as saying, “Suffer little children to come unto me, and forbid them not” – meaning he did not want his disciples to stop youngsters from hearing his teachings.

That saying may now be re-worked to fit the philosophy of David Cameron and Jeremy Hunt to read: “Suffer, little children – for you have a Conservative government.”