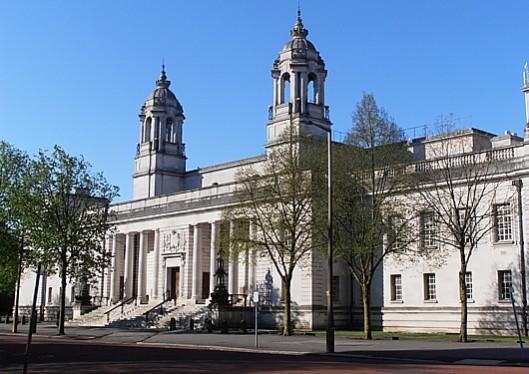 Seen to be done: The tribunal took place at the Law Courts in Cardiff (pictured), in public – which allowed friends of Vox Political to hear the case.

It is with a heavy heart that I must report that a tribunal has upheld the Information Commissioner’s decision that my Freedom of Information request, seeking an update on the number of sickness benefit claimants who have died, was vexatious.

The tribunal agreed unanimously that my blog article, to which I appended a single line suggesting other readers should also submit FoI requests to demonstrate that there are many people who want the latest figures released, was an abuse of the system.

If you are unaware of the situation or your memory needs to be refreshed, you can read the article here.

But judge Chris Ryan criticised both the Information Commissioner and the Department for Work and Pensions for every other excuse they invented to prevent the death figures from being made public.

This was not a glowing endorsement of the Information Commissioner’s – and the DWP’s – stance; in fact, as you will see, the wording of the decision suggests the exact opposite.

The very first line of the decision notice states that my request “was in itself innocuous”, meaning that there would have been no reason for the DWP to have refused it if not for the effect of the blog article.

But you know, dear reader, that I wrote my request after at least two previous requests – one of which must have been equally “innocuous” as I based the wording of my own on it – had been rejected by the Department. That was why I appealed for public support in the first place.

“The combination of the importance of the statistics in their own right and the appellant’s belief, rightly or wrongly, that the Department had no intention of publishing updated figures, led him to take the steps for which he has been criticised by the Department,” wrote Mr Ryan in his decision notice.

He then proceeded to trash – comprehensively – all the IC’s (and DWP’s) other reasons for suggesting that it could not answer my request.

“The Information Commissioner accepted that the request had a serious purpose,” he wrote. [All italics and boldings in the quoted sections are mine]

“In terms of the burden the request imposed, the appellant drew attention to statements made by members of the Department’s staff to the Information Commissioner during his investigation, in which it was confirmed that the requested information was held and that it could be located and released without exceeding the relatively modest maximum cost permitted for responding to an information request… we do not believe that any great weight should be attributed to it [the burden on the DWP] in our determination.”

But his judgement was this: “The appellant was motivated by a determination to ensure that the Department took the request seriously.”

(You should note that I dispute the claim that 23 ‘lookalike’ requests were generated by my blog. I have only ever seen seven of these, with no proof that the other 16 exist at all; of the seven, only one makes any reference to me, while the person responsible for another posted a comment on the blog that ties it to me as well. That’s three messages – not enough to justify any claim of vexatiousness.)

“The request itself is expressed in sensible and balanced terms and, although some of the messages published on the appellant’s blog adopted a more strident tone, we saw nothing that a reasonably robust employee should not have been able to contemplate without distress, assuming (which is not certain) that it was drawn to his or her attention… Little weight ought to be attributed to the risk of staff members feeling harassed or distressed.

“The accumulated effect on the Department, in terms of administrative burden and impact on staff, was therefore relatively light.”

But this did not excuse me from my principle crime, which appears to have been encouraging the rest of you to get involved: “It was in… seeking to bolster his statutory rights with the persuasive power that comes from communal action, that the appellant converted an unexceptional request, on a matter causing justifiable public concern, into one that constituted misuse of the freedom of information regime and could therefore properly be refused on the basis that it was vexatious for the purpose of FOIA section 14.”

That was very discouraging to read!

But look at this: “We have considerable sympathy for the appellant.

“We do not know if he was justified in suspecting that the Department had deliberately concealed statistics about those who died while receiving, or being assessed for, state benefits.

“However, the request did seem, on its face and in context, to be one which might well have resulted in disclosure of the information requested.”

Now, you know, and I know – and the tribunal also knows – that the DWP rejected at least two other FoI requests that were phrased along either identical or similar lines as my own, but those last few comments, along with the others strung throughout the decision, make it clear that the tribunal’s view is that there was no reason to reject any of them.

Therefore the only reasonable reading of this decision is that the DWP was wrong to reject those previous requests.

I must now consider options for the future. The tribunal’s decision seems to clear the way for a request made in exactly the same way as mine (but without the appeal for others to add their voices to it) to receive a full response.

But we are dealing, here, with the Department for Work and Pensions under Iain Duncan Smith. It seems more likely that the tribunal’s decision will be ignored and the same excuses will be trotted out, including a now-invalid claim that the Secretary of State is considering how best to publish the figures.

For that excuse to work, he would have had to publish them very quickly and it is now nine months since the claim was first made. As the figures are time-sensitive – that is, for them to be useful in considering changes to the system, they should be released as soon as they are known – it makes no sense to delay and the DWP’s claim that doing so is “in the public interest” is disproved.

If I do submit another request, the wording of it will have to be carefully considered, to include all the information that the tribunal provided in support of it. Obviously I cannot ask any readers to take any action in this matter at all.

In summary, this is a setback but not a defeat. The tribunal has come to a finding based on its reading of the law, but has made it perfectly clear that it was made with reference to events that happened in connection with my request, and not because of my request itself. The tribunal’s opinion was that there was nothing wrong with the request.

With this in mind, we may move on.

79 thoughts on “Hollow victory for DWP after ‘ESA deaths’ tribunal”