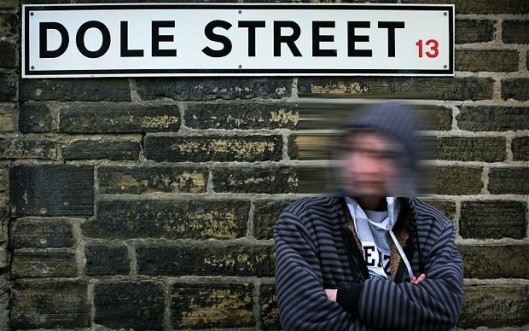 Jobless criminal: Proposals by the Tory Free Enterprise group would put the clock back to the 16th century, when joblessness was a criminal offence.

According to the Telegraph, that outstanding group of backwards-thinking Tories, the Free Enterprise group, has come up with a new way of turning back time to the Middle Ages.

The group, some of whose luminaries were responsible for the stain on literature known as Britannia Unchained, believe those out of work for more than a year should have their benefits docked by 20 per cent.

Anyone unemployed for more than six months should do 30 hours’ community service and lose 10 per cent of their benefits, they reckon.

Britannia Unchained, you will recall, wrongly suggests that workers in the UK are among the laziest in the world.

Magistrates regularly dish out community service orders to people who have been convicted of criminal offences that may be punishable by imprisonment. These orders are for work totalling not less than 40 hours. I suppose the Free Enterprise zealots think they have cleverly avoided comparisons by limiting their suggestion to 30 hours, but if a person is unemployed for more than a year, under their proposal, they would have to do 60 hours’ unpaid work in the community – well within the amount for criminal offences.

Taking away 20 per cent of a person’s income has never been within a magistrate’s – or a judge’s – powers as fines have always been specific amounts. I would imagine that a judge would consider such a sentence to be an overly cruel and unusual punishment.

The whole proposal is reminiscent of the days – perhaps the Free Enterprisers consider them ‘good old days’ – when unemployment was considered a crime, along with vagrancy. Perhaps we should be happy they don’t want to reintroduce the death penalty for it!

That is exactly what unemployment used to attract. From 1536, the law allowed vagabonds and the jobless to be whipped and hanged. In 1547, a bill was passed that subjected vagrants to some of the more extreme provisions of the criminal law, namely two years servitude and branding with a “V” as the penalty for the first offense and death for the second. During the reign of Henry VIII, as many as 72,000 people are estimated to have been executed.

He was on the throne for a fair amount of time, so he’d probably be impressed by the death toll already racked up by this government among the sick and disabled.

Chris Skidmore, Conservative MP for Kingswood, who part-wrote the report, tried to make it look respectable by saying, “Now is the time for the Conservative party to be brave. We need bold thinking and ideas that reflect the fact that we are the party that believes people should have the freedom to make the decisions about the things that affect them.”

Which people? Not unemployed people, I take it. People like you, Chris?

We know the welfare budget is going to be hit again by the Coalition government – these idiots simply don’t have any other ideas. Comedy Prime Minister David Cameron told Andrew Marr his party would “level” with the public about the need for another £16 billion of spending cuts in 2015-16.

“We have to find these spending reductions and if we want to avoid cuts in things like hospitals and schools, services that we all rely on, we have to look at things like the welfare budget,” he said.

And don’t be fooled by Cameron’s comments about hospitals and schools. When he says these are services “we all rely on”, he means that he and his cronies are relying on turning them into cash cows from which they can all profit. The hospitals are already being sold off piecemeal to private firms that Tory ministers partly own.