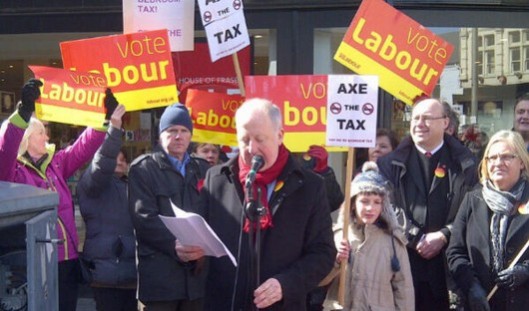 MPs Andy McDonald and Grahame Morris spoke against the bedroom tax at the Middlesbrough demonstration.

According to the Daily Mirror, 26,000 people across the country took part in the 50-odd protests against the Bedroom Tax, all staged earlier today (March 30) – so we can reasonably assume the real figure is much larger than that.

According to Charlie Kimber on Twitter, at least 10,000 were in Glasgow, and the photographic evidence seems likely to bear that out, so my guess is that, for once, the Mirror had taken a conservative (small ‘c’) stance.

The Mirror article had crowds gathering in Trafalgar Square, waving banners and posters with the message ‘Stop bedroom tax’, wearing T-shirts carrying “angry” messages for David Cameron, George Osborne and Iain Duncan Smith. The nature of these messages was not revealed but I think we can make educated guesses of our own.

Whitehall was closed to traffic as, chanting “Can’t pay, won’t pay, axe the bedroom tax,” the protesters made their way to Downing Street.

In Liverpool, the paper said, demonstrators declared an “uprising” during their march.

The Glasgow anti-bedroom tax demonstration. How many people do YOU think attended?

A BBC Scotland report reckoned the Glasgow demo attracted two and a half thousand people, including Bill Scott from disability campaign group Inclusion Scotland (in fact he was in Edinburgh), who was quoted as saying two-thirds of UK households affected include a disabled person – rising to four-fifths in Scotland.

And “disability rights activist” Susan Archibald headed up the Edinburgh demonstration. On Twitter, afterwards, she said, “I was so proud to lead the bedroom tax protest in Edinburgh today. I stood up for all people who were either too poor or ill to attend.”

I particularly enjoyed the IBS – did I say IBS? I meant IDS – quote the BBC Scotland article used:

“Mr Duncan Smith defended the reforms during a visit to Edinburgh on Wednesday.

From that last sentence alone, we can only guess what goes on in a mind that seems, clearly, deranged. But let’s just juxtapose his comments in unfairness with another state subsidy, discussed in this blog yesterday:

“The government thinks it is more fair to deprive people of the money to pay landlords for their homes than it is to cap rents.

“The government thinks it is fair to take money from people who cannot move into smaller accommodation, more appropriate to their needs, because it simply hasn’t been built.

Together we can smash the tax: People in Swindon show their support for the protest.

The protests constituted a nationwide display of disgust at the Coalition government’s attempt to find yet another way for the poor to pay for the mistakes of the rich.

But what happens now?

Historically, governments don’t pay much attention to rallies and protests. The only real way to hit this lot is in the wallet. Look at recent history for a good example: the Poll Tax.

Mass rallies were held, with attendances far greater than those today. The government didn’t bat an eyelid. But when people refused to pay up, and were prepared to face court action, fines and even imprisonment for their principles… I think we all know how it ended. The tax was replaced and the then-Prime Minister was removed.

The trouble is, as you’re probably thinking, this time the government isn’t expecting the people to pay; it’s simply deciding not to pay the people. So how can you fight that?

None of these – and they’re just off the top of my head – are likely to win any court battles, but that’s not the point. The aim is to tie up the government, local government, social landlords and anybody else involved in this nightmarish policy, in ever-more-convoluted legal shenanigans. These things will cost them money. If enough of you get involved, they’ll cost a considerable amount, in fact. Then there’s the question of manpower that will have to be diverted from other work to deal with it. That will cost – as will employing more staff to take on the extra burden.

Government departments are already straining under the burden of appeals against other so-called benefit reforms. Ministers won’t have much tolerance for dealing with these matters because they think they have better things to do.

What could be more important than fighting for your home?