A UK artist has created an art installation as a memorial to the suicide victims of welfare reform.

Melanie Cutler contacted Vox Political regarding her piece – ‘Stewardship’ – a few weeks ago, asking, “Do you think I’ll be arrested?”

The response was that it should be unlikely if she informed the media. The artworks have been displayed at the Northampton Degree Show and are currently at the Free Range Exhibition at the Old Truman Brewery building in Brick Lane, London, which ends tomorrow (June 30).

Entry is free and the installation will be located in F Block, B5.

“I have become an artist later on in life,” Melanie told Vox Political. “I was a carer for my son and, a few decades later, my father. I have worked most of my life too, raising three children.

“Only recently, while studying fine art at University I found my health deteriorating. I have a cocktail of conditions – Type 1 diabetes (diagnosed last year), Coeliac disease, asthma, rheumatoid or psoriatic arthritis (currently being investigated), osteoarthritis, psoriasis and a brain tumour (thankfully benign and inactive). I have also lived with depression for almost all my adult life.

“I wanted my work to articulate how I feel about certain issues. In March this year I pitched up in Thurrock, a marginal seat which will be hotly fought-over in the run-up to the next general election. I sat in front of a blank canvas and asked the people of the town to tell me how they felt about welfare reform, the press and the 2015 General Election. I took a team of people to film and photograph the event and to explain to people what the work was about.

‘People of Thurrock’ in the making. Artist Melanie Cutler sits, silenced, while residents of Thurrock write their opinions of ‘welfare reform’ on the canvas.

“Buoyed on by the reaction to ‘People of Thurrock’, I went on to something else I felt was an important issue; I put welfare reform under the microscope and conducted research around this issue. I was struck by the amount of people who, through no fault of their own, seek to end their own lives as they feel they have no other option. My own family has been touched by suicide and one of my own children is on ESA and awaiting an interview with ATOS.” 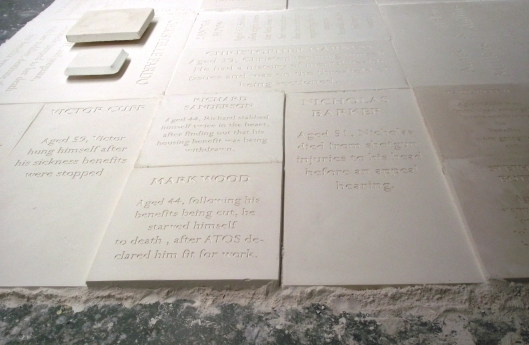 ‘Stewardship’: Each plaque features the name of a ‘welfare reform’ victim and a description of how they died. 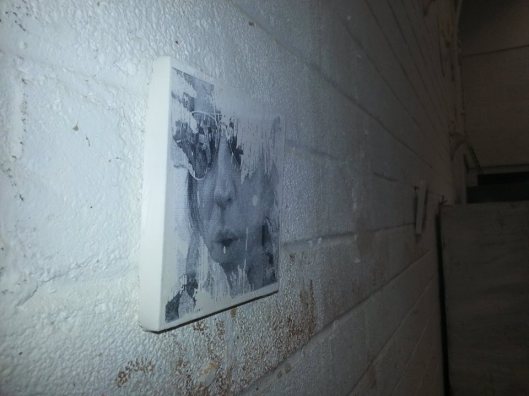 ‘Stewardship’: This memorial is to Paul Reekie, the Scottish poet and writer who took his own life in 2010. Letters left on his table stated that his Housing Benefit and Incapacity Benefit had been stopped.
The poet’s death led to the creation of the Black Triangle Anti-Defamation Campaign in Defence of Disability Rights.