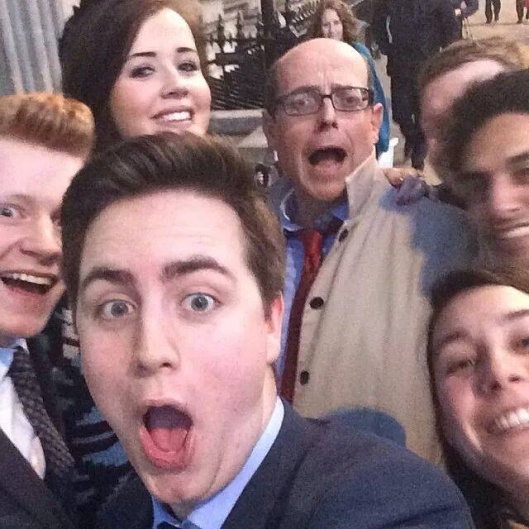 The caption on this picture reads: “Nick Robinson, former Young Conservatives chairman and current BBC political editor, taking a selfie with some young Tories (Photo courtesy of theblueguerilla.co.uk).” Perhaps you’d like to dream up your own caption for this image of wild-eyed, slack-jawed decadence (he’s the political editor at the BBC and people still think it’s left-wing; the mind boggles).

How bizarre. Apparently the right-wing social media want us to believe that, even though Conservative Party membership is believed to have dropped below 100,000, the number of young people joining up or supporting that party is reaching its highest in a decade.

Never mind. If, like Alice, you try to believe six impossible things before breakfast, you still have five more slots available to you.

The new information comes from a website called Vice.com, in an article entitled ‘Rise of the Tory Youth: Meeting Britain’s Young Conservatives’.

And meet them we do, along with some of the most spectacularly ignorant and ill-informed opinions this writer has encountered in a month of Sundays.

Try this, from 24-year-old Louisa Townson, current Tory Society President at University College, London. She tells us she became a member because of Tory economics: “We’d had this huge crash and we knew we had to sort out the national debt and the deficit.” Doesn’t she know that the last four years of Tory economics have cost the UK more than Labour spent in its entire 13 years of office and reduced the deficit by a staggeringly meagre £10 billion?

Louisa thinks the tripling of tuition fees was “fair” – presumably she won’t be saddled with student debt until she’s in her fifties, then.

As for workfare, she thinks “it would be good if [the unemployed] can give something back”. So this young woman, who joined the Conservatives for their economic policies, thinks it’s a good idea to remove paying jobs from the economy by making unemployed people do them – at the taxpayers’ expense – while the rate of corporation tax has nosedived so the host companies take all the profits? How will that help reduce the national debt?

And this is supposed to be an example of the brightest Young Conservative thinking. Oh my word. Oh dear.

Oliver Cooper, president of Tory youth movement Conservative Future, is still under the impression that his party stands for “economic freedom” – the party that, in government, has pushed millions onto the dole to keep wages down; destroyed much of Britain’s remaining industrial base, decimating the economies of entire regions of the UK, to undermine working-class self-confidence and security; de-democratised nationalised industries through privatisation; created a mushrooming of homelessness by promoting house ownership, creating a chronic shortage of social housing and perpetuating it by denying councils the ability to build more; and increased inequalities of income and wealth by cutting the relative value of benefits along with wages, boosting the social exclusion of the poorest in society.

This is supposed to show that it is cool to be a Tory again? Oh good heavens no. It demonstrates the “cancerous… classist and out-of-touch view of the modern middle class youth of today”, as Theodor Ensbury states in the comment column.

“Mix privilege with a lack of life experience … and you have a heady cocktail of political and social empowerment without understanding of consequences,” he adds.

There is much more of this, but there really isn’t any need to go into further detail. Read it yourself, if you can stomach it.

The last thing they deserve is responsibility.

I wouldn’t give them the time of day.

Vox Political seeks to enlighten, rather than perpetuate ignorance.
But this independent blog’s only funding comes from readers’ contributions.
Without YOUR help, we cannot keep going.
You can make a one-off donation here:

“I’m not licked. And I’m gonna stay right here and fight for this lost cause. Even if this room gets filled with lies.” – James Stewart as Jefferson Smith in Mr Smith Goes To Washington

Congratulations are due to Labour MPs John McDonnell and Grahame Morris, who have persuaded Parliament’s Backbench Business Committee to agree that a debate on the ‘WoW’ petition will take place in the House of Commons, early in the New Year.

Responsibility now falls back on the British people to make sure our elected representatives do not squander the opportunity, as the Commons Work and Pensions Committee squandered its chance to hold Iain Duncan Smith to account for his own, and his department’s, statisticial inaccuracies.

The petition, on the government’s website, passed its target of 100,000 signatures at the beginning of the month, meaning the Backbench Business committee had to consider whether a Commons debate should take place.

Those who oppose it will be trying to find any reason – no matter how small – to avoid having to consider the changes it demands, so its supporters need to go through it, line by line, making sure they can justify every claim and every demand with hard facts.

We cannot rely on our MPs to do this. Even those who are sympathetic may not have the time or the resources to research the issues properly; and we have seen from the woeful Work and Pensions meeting on Monday that it is best not to leave Parliamentarians to phrase their own questions.

To use an angling metaphor – which seems appropriate – we must allow no opportunity for these worms to wriggle off the hook.

So, for example, the petition demands “a Cumulative Impact Assessment of Welfare Reform”. The government has denied that this is possible, saying it would be too complicated to carry out and that “external organisations have not produced this either”.

But the Joseph Rowntree Foundation’s report, Monitoring Poverty and Social Exclusion 2013, states: “There is a … growing number of people … in very deep poverty. They are being hit by … overlapping measures from welfare reform”. We can expect some Conservative MPs to demur over the differences between “cumulative” and “overlapping” (probably down to their respective spellings) but it seems clear that the Foundation not only has the evidence needed to provide a cumulative assessment, but has already carried it out.

It should also be noted that the Foundation has said the effects of this year’s changes cannot be quantified yet, and we must wait until next year to learn what further damage may have been caused; this is just the beginning.

It demands an immediate end to the work capability assessment, and strong evidence will be required to show that this is necessary. Individual cases are fine on an anecdotal level – for example the single-question medical assessment (“Did you get here by bus?”) that led to the refusal of benefit for the poor lady from Kingswood who then took her own life; it seems clear that there was no attempt to understand the state of her mental health.

But these stories must be supported by the weight of numbers. We know that 3,500 people in the work-related activity group of ESA claimants died between January and November 2011. How many ESA claimants have died since then, and how many of them were in the group where they were expected to be working again within a year? We don’t know, because the statistics have been suppressed. Why have they been withheld? Is it because the number of deaths has risen to an even more horrifying level?

If the government wants to deny that this is the case, then it must provide proof. The Coalition has had more than a year to produce these figures; if it is unable – or unwilling – to do so then they must be damning indeed.

This article’s headline is based on the title of the film Mr Smith Goes To Washington (the ‘Political’ refers to the fact that some commenters, here and on Facebook, refer to me as if ‘Vox Political’ was my real name). It is a statement of my intent to go to London and watch the ‘WoW’ debate in person, just as Jefferson Smith attends the US Senate to seek justice in the film.

Of course I won’t be able to speak in the debate. If I could, though, I might pick a few words from that old movie, because they are just as relevant today:

“Take a look at this country if you really want to see something. You’ll see the whole parade of what Man’s carved out for himself, after centuries of fighting. Fighting for something better than just jungle law, fighting so’s he can stand on his own two feet, free and decent, like he was created, no matter what his race, colour, or creed. That’s what you’d see. There’s no place out there for graft, or greed, or lies, or compromise with human liberties.

“Great principles don’t get lost once they come to light. They’re right here; you just have to see them again! I wouldn’t give you two cents for all your fancy rules if, behind them, they didn’t have a little bit of plain, ordinary, everyday kindness and a little looking out for the other fella, too.”

Or how about this one? “I guess this is just another lost cause. All you people don’t know about lost causes. They were the only causes worth fighting for – for the only reason any man ever fights for them. Because of just one plain simple rule. Love thy neighbour. And in this world today of great hatred a man who knows that rule has a great trust. And you know that you fight harder for the lost causes than for any others. Yes you’d even die for them.”

People have died for this cause.

Those of us who remain have a duty not to lose it.

Vox Political is funded entirely by donations and book sales.
You can make a one-off donation here: