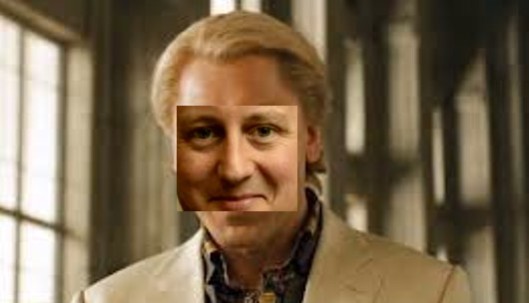 A photofit picture of the real villain in Skyfall. Clearly my photo-manipulation skills are poor, but it gets the point across: Is this how the UK’s Prime Monster sees himself?

Sitting in the cafe yesterday, one of my companions turned to me and said, “You’ve seen Skyfall, haven’t you?”

“That’s the one. You know the sequence where Javier Bardem’s living like a feudal lord on an island that’s been cleared of everyone else, apart from him and his servants?”

“Did you ever think, that could be a metaphor for what our government wants to do to this country?”

That couldn’t be right, could it?

It sounds crazy. But…

Just crazy enough to have a hint of possibility about it.

Consider this: The UK is currently being run by a gang of Eton posh boys who come from a social class that was known in Ireland as the Ascendancy. In fact, is a fully-fledged member of that exact group.

The Ascendancy was a minority of landowners, protestant clergy, and members of the professions – all of which are well-represented in the current UK Parliament – who dominated Ireland in political, economic and social terms between the 17th and 20th centuries.

It seems that clashes with the English meant that a large amount of Irish land had been confiscated by the Crown, then sold to people who were thought to be loyal, so English soldiers and traders became the new ruling class, whose richer members were elevated to the House of Lords and eventually controlled the Irish House of Commons.

Now look at what’s happening over here. Iain Duncan Smith’s benefit cuts mean people are going to be forced out of their homes, particularly in the more expensive parts of our cities – and apparently there is a plan now to force the rest of us into using our homes as security to ensure we continue paying our taxes, in a move to extend homelessness into the middle classes.

Those homes wouldn’t go empty for long – they’d be bought up by anyone rich enough to afford it, in an estate-building programme.

Poor people, deprived of their benefits, homes, and ability to support themselves, might be left to survive as best they can in ghettoes filled with squalor and disease, until they are ready to do anything for an improvement in their living conditions. Then they’ll be hired to work on the new estates, servicing their new masters’ needs.

In other words, the UK would split into several ‘islands’, similar to the one occupied by Javier Bardem’s character in Skyfall. There would be a single ‘Lord of the Manor’ with all the power, his family, and their servants – and that’s all. Technological advancements would mean they would not need to support many of those servants – just enough to work the land and maintain the technology that would ensure their continued ‘Ascendancy’.

To my way of thinking, this would weaken the country to the point where it would be ripe for invasion by any foreign nutter with a gun – but then, this government is renewing Trident, isn’t it? And they’re definitely crazy enough to turn anywhere else into a glowing crater, just to keep themselves comfortable.

But it ticks a lot of boxes.

What do you think is really going on?