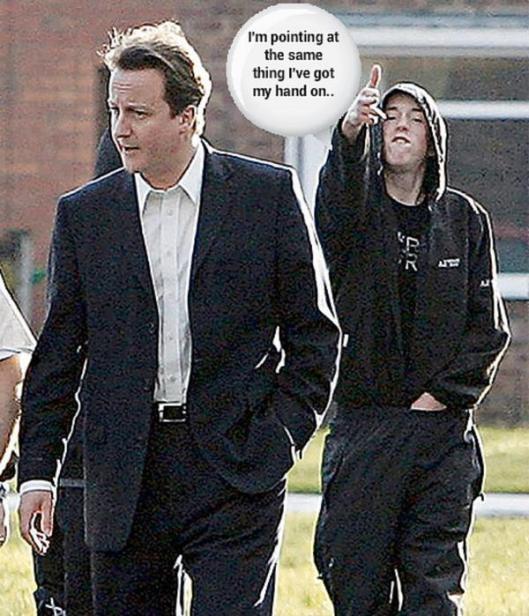 A man who hid in a toilet in order to get near enough to David Cameron to shout, “No ifs, no buts, no public sector cuts” has been sentenced to community service. The public were quick to spot the difference in treatment between this man and Andrew Mitchell, who verbally abused a policeman (an arrestable offence) but was not prosecuted. One wonders what punishment the young man in this photograph would have received for the words here.

One of the best ways to make a point on the internet – satirical or otherwise – is to create a ‘meme’. For the uninitiated, this is a picture that has been modified to make a point, then sent around the net via Facebook, Twitter or other social networking sites. Some of the recent ones have been very good so, while I work on my next piece (probably Cameron selling weapons to the Middle East), I thought I’d put them on show.

David Cameron will always be remembered as the Prime Minister who re-introduced class, and class war, to the UK with his Cabinet of millionaires, and government of aristocrats. Here, Paul Weller gives him the scorn he deserves.

Pastor Martin Niemoller’s famous words about the Nazis get an IDS update here. In a week when Iain Duncan Smith turned the glare of his DWP spotlight onto step-parents, single parents and “broken” families, the targeting might seem a little off, but the words still ring true, and it shows that comparisons with Nazism are still coming thick and fast. The fact is that both the Conservatives (now) and the Nazis (in the 1930s) got into government without getting a majority of the national vote, and then set about policies that were not what they had professed to the public. 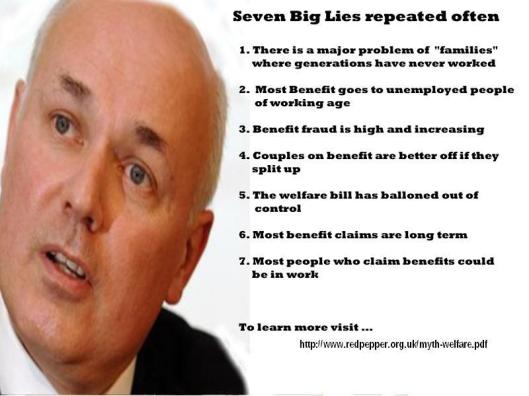 Finally, a little background reading. Next time you hear the Insidious Dole-Snatcher – or any of his chums – spitting out these claims as though they’re true, just take a moment to check their veracity. The link is in the image.