Americanised healthcare: It is appropriate that the only appropriate image I could find features dollars instead of pounds – because it is clear that the Tory government is changing the NHS into an Americanised insurance-based service.

Confidential information on NHS patients has been sold to insurance companies who used it in combination with information from credit rating agencies to identify customers and “refine” their premiums – increasing the costs of policies for thousands of customers, despite all the Tory-led government’s assurances to the contrary.

According to the Daily Telegraph, “a major UK insurance company… was able to obtain 13 years of hospital data – covering 47 million patients.

“As a result they recommended an increase in the costs of policies for thousands of customers last year.”

The revelation comes only days after plans to sell the confidential medical information of every NHS patient in England were put on hold amid a public outcry.

The care.data system, also called variously the General Patient Extraction Service (GPES) or the Health and Social Care Information Centre, was dreamed up as a money-spinning device by Jeremy Hunt’s Department of Health.

The aim is that, if you are an NHS patient in England, your GP will be forced to provide your confidential records, showing every medical condition you have ever had and providing intimate details of your current state of health, to a huge national database.

From there, your information may be sold on to private healthcare and pharmaceutical companies for “research”. The government has said the information would be “pseudonymised”, in an attempt to reassure you that you cannot be identified from the information to be provided to outside organisations.

Only last Friday the BBC was reporting that critics of the scheme were “scaremongering”.

The Corporation – which has failed to report the new development – quoted Tory MP George Freeman, founder of Patients4Data, which represents charities and drug companies (and not patients, apparently) as follows: “We cannot let opponents peddling scaremongering myths stop patients benefiting from this quiet revolution of modern medicine.”

And last month, NHS England categorically stated: “No data will be made available for the purposes of selling or administering any kind of insurance.”

Vox Political has made it clear from the outset that this is not true, and in fact it will be entirely possible to trace your medical information back to you. Now we have proof.

NHS England has delayed compiling the new database of English NHS patients until the autumn. You could help sink the scheme altogether, if you don’t want your government – and your NHS – to sell your information into the wrong hands. Just opt out of the data sharing scheme, using a form designed by the medConfidential website.

Make no mistake – the Conservative Party and the Liberal Democrats in Parliament have betrayed you.

They have already sold hospital patients’ information to insurance companies, and there can be no doubt that the intention is to do the same with GPs’ confidential records, with a consequential increase in insurance costs to people across the country.

They are turning your beloved National Health Service into an insurance-based scheme, on the same lines as the vastly more expensive American system.

They have been lying to you.

Are you going to sit there and let them?

Iain Duncan Smith reckons there is no link between his regressive changes to benefits and the rise of food banks. Let’s check that. First, we’ll look at wages – because working people are going to food banks as well as the unemployed. This graph clearly shows how wage increases have dropped (while inflation has continued to boost prices).

As far as the effects of benefit up-rating measures are concerned, reductions in entitlement are unsurprisingly concentrated in the bottom half of the income distribution. The lowest-income decile group see the largest fall in entitlements as a percentage of income (1.5%) as a result of measures in the Bill, and the second decile see the largest decrease in cash terms, losing about £150 per year on average. 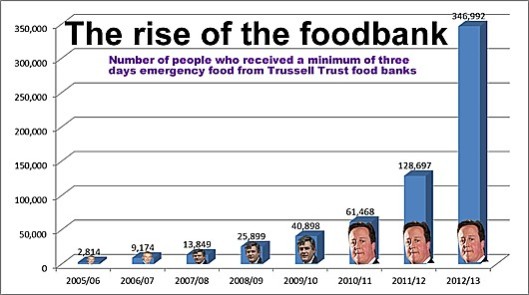 What does this mean for foodbanks? This graph, showing the exponential rise in their use, should be self-explanatory – to everyone not at the DWP, at least.

He was in the headlines over the weekend after he accused food bank charity The Trussell Trust of “scaremongering” in order to get publicity for its work.

Refusing to meet representatives of the trust – thereby reneging (in advance!) on a promise we all heard during the food bank debate in Parliament last week – he stated in a letter written during November that the increased poverty forcing people to seek food bank aid was not linked to his regressive changes in the social security system, and that the charity was using this claim to get publicity for itself.

Quoted in The Observer, his letter began by criticising the “political messaging of your organisation”, which “despite claiming to be nonpartisan” had “repeatedly sought to link the growth in your network to welfare reform”.

He went on to reject suggestions that the government was to blame: “I strongly refute this claim and would politely ask you to stop scaremongering in this way. I understand that a feature of your business model must require you to continuously achieve publicity, but I’m concerned that you are now seeking to do this by making your political opposition to welfare reform overtly clear.”

Has nobody noticed that this attitude is clearly contradictory? If The Trussell Trust was a corporation that was seeking to increase its share of a market, then he might have a point, but the entire thrust of this charity’s argument is that everyone involved wishes they were not having to do this work. Any publicity it seeks is intended to reduce the need for food banks, rendering Mr Duncan Smith’s claims about publicity-seeking null and void.

One would have expected him to realise this when he found himself writing that the Trust had “repeatedly sought to link the growth in your network” – a growth that the Trust deplores – “to welfare reform”.

Also, if he wants to refute any claim he must provide evidence to the contrary – a feat that the Secretary of State for Work and Pensions has yet to manage regarding any of his policies.

But then, as Sir John Major has pointed out, he isn’t very bright.

A Department for Work and Pensions spokesperson, quoted in the same newspaper report, said, “There is no robust evidence that welfare reforms are linked to increased use of food banks.”

Oh no? Let’s resort to a little common sense then. What do you think happens when wages are pushed downwards for a period of more than three years, while benefits are slashed to the bone?

Exactly. Perhaps, if the DWP wants evidence, it should do some empirical research.

Vox Political needs your donations more than ever before! It is funded entirely by donations and book sales.
This site needs YOUR support to continue.
You can make a one-off donation here: