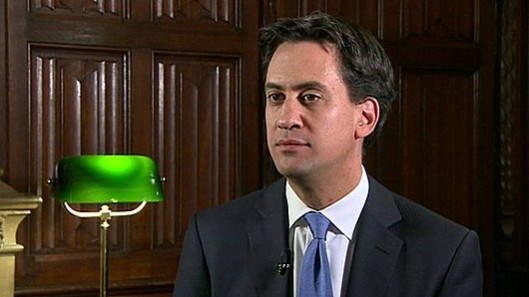 The right man for the job? Despite what follows, Ed Miliband must take much of the responsibility for the Sun photoshoot cock-up. If he’s going to slavishly do whatever his political advisors say then he is a follower, not a leader. He should be thinking very carefully about the right thing to do – not only for his future, but for the future of the nation.

Ed Miliband has lost far too much political ground by making silly schoolboy mistakes, but it is right that he should not take all of the blame.

The Labour leader is surrounded by advisors who should be warning him away from having his photograph taken with a football-promoting copy of The Sun in the week that the Hillsborough inquests were taking place. Instead it seems they egged him on to do it.

That’s completely wrong-headed and suggests that there are people close to Miliband who are working against him. Blairites who want to discredit ‘Red Ed’, perhaps? It would explain why Labour is still coming out – and getting bogged down – with ‘Red Tory’ ideas when it should be pushing a new anti-austerity, anti-privatisation, pro-equality and pro-fairness position.

The party’s former deputy chairman, Tom Watson, wants to see better results or resignations – but he’s being far too charitable to people who are idiots at best, fifth columnists at worst.

“The people around Ed… they’re very powerful political people; they carry a lot of power in the Labour party,” Watson told Radio 5 Live (as reported in The Guardian). If that’s true, then they probably gained that power as part of neoliberal New Labour. Their ideas will be as out-of-date as those of the current Conservative-led Coalition.

Look what Watson said shortly after: “We had a leader of the Labour party who was publicly embarrassed on Thursday because whoever was in charge of press let him go through a process where we had councillors in Merseyside resigning. It was a schoolboy error from someone who doesn’t understand the Labour party.” And yet, by his own admission, these are some of the most powerful people in it!

But you didn’t have to be a powerful political advisor to know what the right decision should have been; a commenter on Facebook pointed it out. Miliband should have declined The Sun‘s invitation and arranged a photo shoot of his own, preferably with a local football team; “Labour supports British football from the grass roots upward.” That would have highlighted, also, the commercialisation (and corruption?) of the game at higher levels.

It’s what I would have suggested.

So here’s a thought: Let’s tell Ed to fire whoever told him a Sun photoshoot would be a good idea and hire me instead. Not only do I know what the score is (more than his current yes-men, for sure), I won’t cost as much, and it’s a job I can do from home – so my activities as a carer won’t be affected.

You think that’s a mistake? Surely not.

How much time do you think it takes to tell a man the difference between a good idea and a duff one?

All you need is the sense to know the difference…

… and the proper political motives.