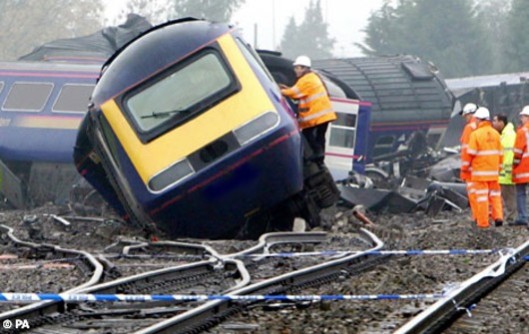 De-railed: After years of reliance on taxpayers’ money, it seems the ride may soon by over for some of the UK’s rail privateers [Image: PA].

The Labour Party seems to have a real problem with offering the public what the public has demanded.

Faced with demand for the railways to be renationalised, they seem set to announce a plan in which private firms compete with a public service for franchises.

The promise of privatisation had been that the new franchise-holders would keep prices down, and any investment should be made by the companies concerned.

In fact, fares and taxpayer investment have rocketed since the railways were privatised by the last full Conservative government in the early 1990s.

It seems that Labour’s plan, which may be announced next week (the party is being very cagey about it), will mean franchises are awarded based on “a pragmatic choice between the state and private sector based on price, reliability and quality of service” (according to a report in The Guardian).

This, we are told, “will provide a solution that allays commuter frustration, provides a fair deal for the taxpayer and does not amount to a return to British Rail”.

Such a decision will not only anger rail unions, Labour MPs who have been calling for renationalisation, and 70 per cent of the British public, but also the rail industry’s private operators, who say current bids for franchises must not be upset by allowing the state to join the process belatedly.

It has also been claimed that an extra risk would be imported onto the public sector balance sheet if a state-owned company won a franchise.

But this is narrow-minded thinking; the state currently spends much more on the railways than it did before they were privatised – we already have a large risk on the public balance sheet.

If these private firms had done their jobs properly, then the taxpayer would not be shouldering so many of their costs and – perhaps – the Labour Party would not be considering even the partial renationalisation that is on the table at the moment.

None of the UK’s current rail operators have kept their promises and after 20 years, it is far too late for them to bleat about the situation they have created.

It should also be noted that the public sector has been running the East Coast Main Line extremely successfully since the franchise run by National Express failed, making expansion of this management model highly attractive to Labour strategists who need to find ways of trimming the burden on the public purse.

As a group of prospective Labour MPs in marginal constituencies wrote in a letter to The Observer, it would mean “hundreds of millions currently lost in private profit would be available to fully fund a bold offer on rail fares”.

If so, it seems that this halfway-house plan may provide exactly what we need, even if it isn’t what anybody wants.