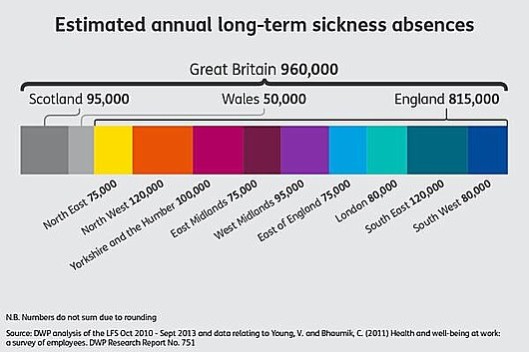 The pretext: These are the figures showing the estimated amount of long-term illness in the UK per year. Remember that these figures have halved in the last decade.

The Department for Work and Pensions is setting up a new “service” offering “advice” to people who are off work with an illness for more than four weeks.

No reference is made to improving people’s health.

It should also be noted that sickness absence in the UK is among the lowest in Europe, and has halved over the past decade.

The announcement was made on the BBC News website shortly after midnight. Nothing has appeared on the Government’s own website so it seems the Corporation has gone back to being Westminster’s poodle again – breaking news for the government in order to give spin doctors time to assess the reaction and then write a press release that is more acceptable to the public.

The Health and Work Service will be a privately-run operation covering England, Wales and Scotland, offering “non-compulsory” medical assessments and “treatment plans”. This is reminiscent of the way Universal Jobmatch was introduced to jobseekers as a “non-compulsory” service – which many thousands of people have been bullied and harassed into joining.

The scheme will allow employers or GPs to refer employees for a “work-focused occupational health assessment”, according to the BBC report. So this means the employee has no say in whether to go on the scheme – it is down to bosses and doctors. You are invited to consider whether this represents another great step forward in the Conservative Party’s claims to be crusading for patient choice.

The story says workers will be allowed to refuse assessment or to follow any course of action that is recommended but, again, we have the example of Universal Jobmatch.

The “assessment” is meant to identify the issues preventing an employee from returning to work and draw up a plan for them, their GP and their employer, showing how that person can be “helped” back more quickly.

One is forced to question the efficacy of such a system, if faced with illnesses or diseases that must receive medical treatment.

You don’t talk someone better – the huge number of people who have died while going through the DWP’s Employment and Support Allowance sickness denial machine has proved that.

The government has made its aim in setting up the new scheme perfectly clear, saying employers will “save money” by having fewer staff off sick – possibly saving companies up to £70 million a year in reduced sickness pay and related costs.

The DWP says people will return to work earlier. This seems like a pie-in-the-sky aspiration, as illness does not go away in accordance with a timetable. This means the Department’s other claims – that there will be a reduction in lost working days and increased economic output – are also pipe dreams.

It is far more likely that sick people will be forced back to work before they are better – leading to an increased chance that illnesses will spread among workforces, there will be more lost working days and lowered economic output.

The Trades Union Congress, while supporting schemes that could help people back into work, agreed (with me) that this one creates a danger that people will be forced back to work before they are well.

Finally, any company involved in the scheme should be aware that it is unlikely to make a profit from it. Look at the effect on other firms of involvement with DWP schemes: Welfare-to-work provider A4e has reported a pre-tax loss of £11.5 million in the year to March 31, 2013 – up from a £2.1 million loss the year before. Turnover dropped from £194 million to £167 million.

So now we can say very clearly to all private companies:

Vox Political wants Britain to have a health and happy workforce.
But lack of funds directly threatens our own continued existence.
That’s why Vox Political needs YOUR help to continue.
You can make a one-off donation here: