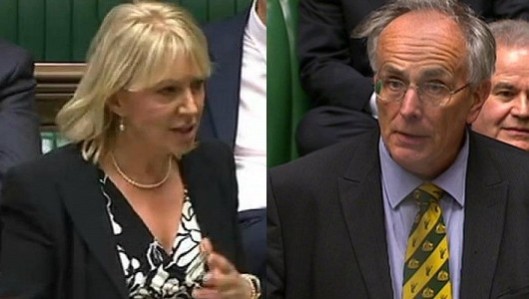 Dorries or Bone: Who is the most vile? That is the question facing MPs at the moment.

The position of deputy speaker in the House of Commons is vacant – and Tory backbenchers are falling over each other in the battle to make the silliest bid.

The vacancy has occurred after Nigel Evans quit the post to fight allegations of sexual criminality.

We have already heard that Nadine Dorries has made the priceless offer to put herself beyond Parliamentary debate by standing for election – now it seems that Peter Bone, he of the long-winded Parliamentary questions and the long-suffering wife, has also put his name in the hat.

For when he interrupted Paul Flynn during the debate on the Transparency of Lobbying Bill yesterday, saying “I am slightly worried that if he carries on for much longer we will not be able to grill the Leader of the House”, Mr Flynn responded that he would not want to deny the honourable gentleman — a possible future Deputy Speaker of the House — that privilege.

“I believe that he is one of the candidates,” said Mr Flynn. “It is fascinating to get these invitations. One from an honourable lady said, ‘Vote for me and you won’t have to put up with me on the benches. I will be silenced.’ Therefore, we are voting for the one we most want to silence and we think is most loathsome.

“It is a hard task, because we have a rich choice.” 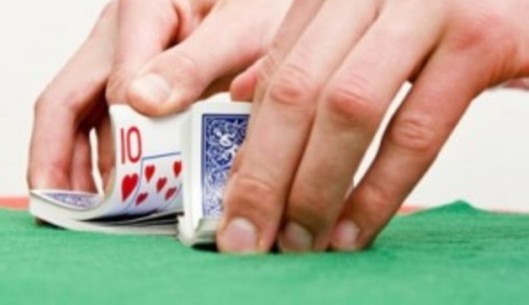 Rearranging the pack: Both the government and its opposition are having a reshuffle today – but will we get aces, or just another set of jokers?

Today’s the day – doomsday for some, and a new dawn for others. Both the Coalition and Labour are reshuffling their top teams.

We already know some of the names that have stepped down. On the government side, Michael Moore has been sacked as Scottish Secretary, to make way for fellow Liberal Democrat Alistair Carmichael. Apparently Mr Carmichael, referring to the upcoming referendum on Scotland seceding from the Union, has said he is “up for it”.

At least nobody tried to put a Tory in, to represent a country where that party has no MPs at all. It may seem beyond the realm of possibility but with the Government of Idiots (and I refer to the term in its classical sense) it would not be surprising.

Deputy Chief Whip John Randall and Cabinet Office Minister Chloe Smith (who was humiliated on the BBC’s Newsnight last year when, as Exchequer Secretary, she struggled to answer questions about the government’s decision to defer a rise in fuel duty. It seems she had been promoted because David Cameron mistakenly believed she was a trained accountant. This does not bode well for today’s decisions) have both stepped down.

The BBC reported that Ms Smith’s resignation letter stated she had been “only 27” when she became an MP and now wanted to “develop other ways of giving public service” – indicating possible disillusionment with the Coalition government and the way it conducts itself.

Transport Minister Simon Burns has also stepped down – but this is to run for the position of Deputy Speaker, which was left vacant by Nigel Evans after he stepped down to fight criminal charges for sexual assault.

All the pundits are saying the government reshuffle will concentrate on mid-level ministers, with every Cabinet-level Tory secure in their position. What a shame.

Meanwhile, over at Labour, the situation is not so clear. Ed Miliband’s decisions have been unrestricted, and speculation has ranged from whether he will increase Shadow Cabinet representative for women, bring back members of Labour’s old guard (unlikely – he would face criticism along predictable lines from the Tories and besides, this seems to be about bringing in new, more attractive faces), promote people who are loyal to him or (my preference) have a Shadow Cabinet Of All Talents – including critics who happen to be very good at their jobs.

Abraham Lincoln had a Cabinet Of All Talents, if I recall correctly. Some consider this to be part of what made him great.

One person who won’t be a part of Labour’s team is former Minister (and then Shadow Minister) for the Disabled, Anne McGuire. who quit last week after five years in the job.

The Stirling MP was praised by disability campaigners such as Sue Marsh who, in an email, described her as “the one true ally we had on Labour’s front bench”.

And blogger Sue Jones wrote: “Anne will always be remembered by our community for her very articulate attacks on the media’s [mis]representation of disabled people and on the Government’s welfare reforms, in parliamentary debate. I remember her account of private debate, too, on the same topic with Iain Duncan Smith, and such was her ferocity and anger at the profound unfairness of the media’s sustained persecution of sick and disabled people, fanned by Iain Duncan Smith, as we know, that she pinned him against a wall on one occasion.”

But the former Shadow Minister, who is herself disabled, ran into controversy when she agreed to host a fringe meeting at this year’s Labour Party Conference, organised by the right-wing thinktank Reform, and sponsored by the Association of British Insurers.

Entitled ‘New thinking on the welfare state’, the event seems to have been a front for insurance companies to try to influence Labour’s thinking on social security in the future. Similar events were arranged by Reform and staged at both the Liberal Democrat and Conservative conferences.

Discussions at the private, round-table policy seminar seem to have centred on ways in which insurance companies could become more involved with social security – what products they could sell to working-class people who fear the loss of income that follows loss of employment.

This is exactly the scenario that the American Unum corporation wanted to create when it was invited into the then-Department of Social Security by Peter Lilley – a weakened state system that either cannot or will not support people in genuine need, particularly the sick and disabled, forcing them to buy insurance policies in the hope that these will top-up their income.

Anne McGuire denied this was the intent of the exercise but it is significant that neoliberal New Labour did nothing to prevent the advance of this agenda during its years in power, including the period she spent as Minister for the Disabled.

People who have suffered under the current benefit regime are demanding – ever more stridently – that Labour should mount a strong attack on the practices of the Department for Work and Pensions, as run by Iain Duncan Smith and his cronies, Mark Hoban and Esther McVey.

Part of this demand is that private organisations such as Unum and Atos, which administers work capability assessments, should be kicked out, and a new, fairer system of determining disability benefits based on a claimant’s medical condition and needs, rather than the greed of private enterprise, should be brought in.

There has been no hope of this with plastic Tory Liam Byrne as Shadow Work and Pensions spokesman, but rumour has it he could be shunted out and replaced by Rachel Reeves. Is this a good move?

The omens are not wonderful. She is yet another alumnus of the Politics, Philosophy and Economics course at Oxford (another notable example of that course’s graduates is David Cameron). Her background is in business. She once interviewed for a job with tax avoiders Goldman Sachs (but turned down the job offer) and has been named by The Guardian as one of several MPs who use unpaid interns.