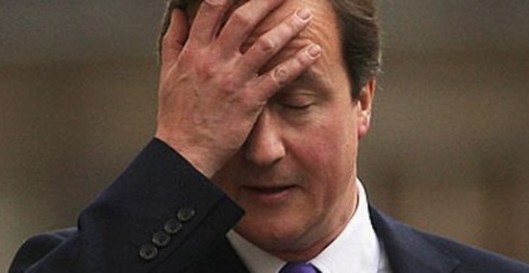 Run, David, run: UK Crime – sorry, Prime – Minister David Cameron has found a reason to be in America while his party tears itself apart over Europe. Nice one, David! We all thought the Tories were turning their Lib Dem Coalition partners blue but in fact, they’ve turned you yellow!

Look at all this political theatre over Europe. It’s for the entertainment of you, the voter – even though you won’t actually gain a thing from staying in or leaving the Brussels-based bureaucracy.

The Conservative Party is going into meltdown about it, certainly – but that’s because individual Tory MPs fear losing votes to UKIP at the next election, making it possible for their party to lose the only thing that matters to them: Power.

UKIP wants out because it is composed – or was, back when it began – of businesspeople who believe that they are being over-regulated by the European Union. They want the freedom to sell inferior products to you, without being penalised for it.

The Tory amendment to the Queen’s speech is nothing but a performance, put on for the benefit of the plebs. It’s a pantomime, with the British public urged to shout “Look out behind you!” at David Cameron’s Widow Twanky, whenever we see the Eurosceptics creeping up out of the shadows.

Note that, in this scenario, Education dunce Michael Gove and damp squib Defence sec Philip Hammond play the ugly sisters; they say they want out of Europe, but they won’t actually do anything about it. Straw men.

The amendment, which condemns the Queen’s speech for failing to include a bill preparing the way for a referendum on whether we stay in the EU, is not only pointless but dangerous. As mentioned previously on this blog, amendments to the Queen’s speech are traditionally taken as confidence votes. The fact that this is a Conservative Party amendment suggests that the government no longer has confidence in itself. If the amendment succeeds, the Prime Minister should resign and the government should fall.

Perhaps I am mistaken. This is not pantomime – it’s farce.

And the amendment is certain to be defeated, according to the pundits, because all the Liberal Democrats, most of Labour and a significant proportion of the Conservatives will vote against it. This means that even the question of confidence in the government can be avoided because nobody will be able to raise it as an issue.

That’s why I said, elsewhere on the internet, that Labour should abstain.

On the Huffington Post site, I wrote: “Labour’s best move is to abstain, let the Tories defeat their own government with the amendment, and then see if Cameron follows Parliamentary convention and resigns. It’s possible he’ll say that a vote on the Queen’s speech is no longer a confidence issue because of his Fixed-Terms Parliaments Act, which defined a ‘no confidence’ vote for the first time, but this may be countered by saying that, if Parliament does not support the planned legislative programme, then it does not support the government or the Prime Minister who leads it.

“If the PM ignores the resignation issue, then we can all say he is running an outlaw government and nothing he does from now on should be considered legal; if he resigns, then the amendment won’t matter because it won’t go forward.

“And let’s face it, if Labour can abstain on the Jobseekers (Back to Work Schemes) Bill, there’s no reason not to abstain on this!”

If the amendment succeeds, we can have a proper debate on whether this government is fit for purpose – at a time when people are still coming to terms with the first death directly attributed to the imposition of the Conservative Bedroom Tax, which itself follows the deaths of thousands due to the Conservative-employed Atos firm’s mismanagement of Employment and Support Allowance assessments.

It won’t, and we’ll be denied our chance to have that debate.

But just remember – despite all the swagger and show – you’re being denied the chance to have a proper debate on Europe as well.