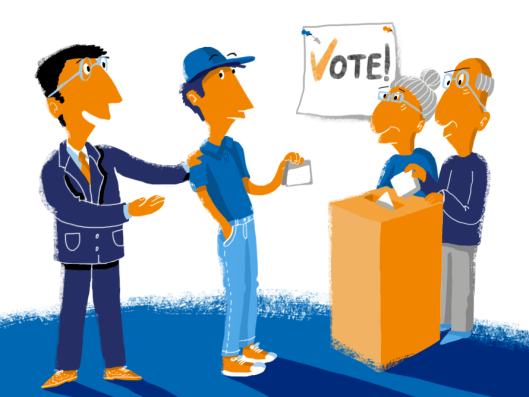 You can lead a young person to the polling station but you still can’t make them vote: How do we get our youth to exercise their democratic right? [Image: theday.co.uk]

Have you noticed how the mainstream media have glossed over the fact that so few people voted in the European elections?

Only about one-third of the electorate bothered to shift their backsides from the sofa to the polling station, and only a quarter of those gave UKIP its resounding (if you believe the BBC) victory.

That’s just nine per cent of the electorate!

The other nine-tenths of the country – including both voters and non-voters – didn’t want UKIP to win, and it is delusional of that party’s supporters to say the whole country got behind them.

The problem is, far too many people didn’t get behind anybody else.

My cousin’s daughter, at 18, voted for the first time last week. She said she found it extremely difficult to form any definite opinion on which party to support because it was almost impossible to find reliable information.

You see, she’s not stupid; she wasn’t going to take the parties at face value. She wanted independent validation of their claims, and that’s hard to find.

Obviously the mainstream media are a lost cause. They all have their favourites and it is impossible to get any useful policy information from them. If you were watching the BBC, you would know that UKIP want Britain out of Europe and an end to what party leaders see as indescriminate immigration.

What did Auntie say about Conservative policies, other than that they were offering an in/out referendum in 2017 if they won a general election next year, which is nothing to do with the vote we’ve just had? What was said about Labour? What was said about the Liberal Democrats?

I’ve got no idea, and I spend my life commenting on politics! What chance do these teens have?

The problem is that there simply isn’t a resource that can provide easy answers for young people. If they want it on a website, it would have to feature not only listings of what the parties say they’ll do, but information on the philosophies behind those plans – so readers can understand the proposed direction of travel. It would have to carry detailed information on each candidate, in each constituency and ward, to enable our young people to judge the character of the people they were being asked to trust.

It would be unwieldy and it would be controversial. Candidates would be accusing it of bias within five minutes of any such website going up.

My cousin-once-removed thought that local councils should have information on their websites but I pointed out that they would only be allowed to publish material from the parties themselves, without any kind of commentary at all; as such it would be nothing more than propaganda.

So what’s the answer?

That’s not a rhetorical question; it’s a call for suggestions.

Schools don’t teach politics in any meaningful way. Citizenship was supposed to have gone onto the curriculum years ago but this writer hasn’t seen any increase in political awareness amongst the young. Political representatives aren’t allowed to discuss politics with students unless members of other parties are also present, which means they can each obstruct the others from doing so.

Courses on politics at further or higher education institutions really are biased according to the lecturers’ own beliefs – look at Oxford’s neoliberal PPE course.

Young people don’t have time to cut through all of the babble.

So most of them walk away.

How do we get them back – or do we simply not bother, and watch as democracy is quietly euthanised within the next generation?

Senior Liberal Democrats have been warned they might end up with no MEPs after next month’s European Parliament elections, due to the party’s current electoral unpopularity (according to the Daily Telegraph).

The electorate certainly has plenty of reasons to punish the party that has become known as the ‘Tory Democrats’ due to its adherence to Conservative Party policies in the Coalition government.

But here’s an interesting point: Conservative support has not dropped off in the same way.

The Liberal Democrats voted the Bedroom Tax onto the statute books, but it’s not their policy – it’s a Conservative scheme.

The Liberal Democrats had very little to do with the changes to Employment and Support Allowance that have led to the deaths of so many people with long-term illnesses and disabilities – Conservative ministers pushed them into practise.

The Liberal Democrats had little to do with the increased sanctions regime that has been foisted on the unemployed in order to cook the benefit books – that was a Conservative idea.

The Conservatives are responsible for the plan to cut back access to Legal Aid, so rich criminals can walk free while the innocent poor are told to admit offences they have not committed and go to prison.

The Conservatives introduced mandatory work activity (colloquially known as Workfare) for people on benefits – both unemployment and sickness, meaning companies get free labour and there are fewer paying jobs in the economy.

The Conservatives introduced the Workplace Pension, which has led to employers encouraging their workforce to take out private pensions that they cannot afford, in a bid to avoid paying their own part of the scheme.

The Conservative Party’s answer to the immigration question was to send vans around London encouraging people who were in the UK illegally to “go home”. This scheme led to the victimisation of British citizens because other people thought they looked foreign.

The Conservatives told us all they would protect the National Health Service and then started a process of privatisation that has led to billions of pounds worth of services being ‘outsourced’ to private health firms – who pay handsome donations to the Conservative Party – at huge cost to the taxpayer (because private firms need to make a profit, don’t forget).

The Conservative Party has fed the public one lie after another, using its puppet right-wing press to brainwash people into believing its nonsense. When these falsehoods have been exposed, ministers have tried to bluster their way out of the blame.

The Conservative Party has engineered the feeblest economic recovery in British history, ensuring that only the very rich have been able to benefit while the poorest – who actually made it happen – are set to be thousands of pounds worse-off in 2015 than they were in 2010.

And yet it is the Liberal Democrats who have lost the most support.

Confrontation: Let’s hope the FoI tribunal ends as well for Vox Political as his encounter with the dragon did for St George. [Image: bradfordschools.net]

Vox Political is going to court.

A tribunal on April 23 – St George’s Day – will hear my appeal against the Information Commissioner’s (and the DWP’s) decision to refuse my Freedom of Information request for details of the number of people who died while claiming Incapacity Benefit or ESA during 2012.

The aim is to find out how many people died while going through the claim process, which is extremely stressful for people who are – by definition – ill or disabled; and also to find out how many have died after being put in the work-related activity group of Employment and Support Allowance claimants, as these are people who should be well enough to work within a year of their claim starting.

The Department for Work and Pensions has guarded these figures jealously, ever since an ‘ad hoc’ statistical release in 2012 revealed that, every week, an average of 73 people in the above two categories were dying.

According to the rules of the process, these were people who should not have come to the end of their lives while going through it. Clearly, something had been going wrong.

The DWP has strenuously denied this, and has made great efforts to promote its claim that it has improved the process.

But when at least two individuals asked for an update to the ‘ad hoc’ release at the end of 2012, all they received in return was delay and denial.

That’s what prompted me to make a very public FoI request in mid-2013. I published it on the blog and suggested that readers who felt the same way should follow my example.

The DWP claimed that this meant I had co-ordinated a campaign of harassment against it, and answering all the requests it received would create a severe burden on its already-taxed resources. It refused my request, claiming that it was “vexatious”.

In its own words, the DWP is an extremely-large, customer-facing government department with 104,000 employees. It is claiming that it received 23 requests that were similar or identical to mine in the period after my blog post – but I have not seen these and it is possible that this is inaccurate.

Severe burden? Campaign of harassment? It doesn’t seem realistic, does it?

I reckon I have a good chance of winning this – which brings me to the next issue: Winning is only part of this battle.

It won’t mean a thing if nobody hears about it.

Vox Political is a small blog. Agreed, some articles have been read by more than 100,000 people (presumably not all DWP employees) and hundreds of thousands more will have heard of them – but these are rare, and there are more than 60 million people in the United Kingdom.

If I win, I’m going to need help to get the information out to the public. I can’t rely on the mainstream media because they tend to support the government and may suppress the information. Having said that, I do intend to put out press releases and give them the opportunity to do the right thing.

But I also want to hear from people on the social media who want to help get this information out – either on blogs, organisations’ websites, personal websites, Facebook pages and Twitter feeds. It doesn’t matter how many people follow you; if you want to help, please get in touch.

Please also feel free to suggest people or places that might help if contacted.

Reply using the ‘Comment’ box at the bottom of the article. I won’t publish your details but will use them to create a list of participants.

When I receive a verdict from the tribunal, I’ll put out an announcement and we’ll have to see how much noise we can make.

This is a chance for the social media to show what they can do.

Vox Political stands up for the vulnerable
… and we need people to stand up for us.
This independent blog’s only funding comes from readers’ contributions.
Without YOUR help, we cannot keep going.
You can make a one-off donation here: