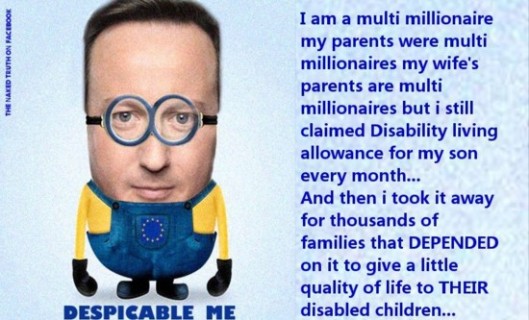 Despicable Him: All the puff pieces* in the world won’t save David Cameron when ordinary people can use their computers, look up what he and his government have done, and tell other people about it.
*A puff piece is a newspaper article written for no other reason that to promote or advertise its subject; an article with little or no real news value. Like today’s Telegraph editorial.

Whoever wrote today’s editorial at the Daily Telegraph doesn’t realise that we can debunk these articles faster than he (or she) can write them.

And if you’re working at the Daily Mail? That goes for you too.

The article to which I refer is headed with the overly-optimistic line ‘A year for the Tories to restore their reputation’ and goes downhill from there.

The thesis is that the Conservatives, in government, have failed to deliver the “competence and compassion” that they promised in 2010 – competence in putting the government, especially its finances, back on the right track; and compassion in ruling not just for the rich but the whole country – “not least via far-reaching reforms to education and welfare, intended to benefit the most disadvantaged in society”.

The piece is riddled with nonsenses, most of which have long-since been dismissed by anyone of modest intelligence who can use an internet search engine. So:

“The Tories are grappling with a truly toxic legacy (both fiscal and otherwise)” – and yet it is still business as usual for the banks, nearly three years after the election. Why have we not seen the reforms we have been promised?

“It was always going to be a tall order for an administration led by polished public school types to lead the nation through an age of austerity.” For “polished public school types” read “rude, uncultured oiks with over-inflated opinions of themselves”. Oh, and there’s a typo. Between “an” and “age of austerity”, the missing word is “unnecessary”.

Here’s the bit that made my blood boil, though: “In fact, the Tories still have a strong story to tell. Their education and welfare reforms, together with the raising of income tax thresholds that the Lib Dems insisted on, represent a genuine attempt to help the poor.”

Did the author seriously think they were going to get away with that? I couldn’t let it go unchallenged and wrote the following into the article’s ‘Comment’ column: “The education and welfare reforms do NOT represent any kind of attempt to help the poor. Welfare in particular is an ongoing disaster, with thousands of those on sickness or disability benefits already dead, having either suffered terminal worsening of their conditions thanks to the heartless regime inflicted on them by an apparently-psychotic Iain Duncan Smith, or given up and committed suicide just to break the cycle of harassment and intimidation.

“It’s as if this government is deliberately trying to kill off those whose health prevents them from working.

“And I should know – not only am I a carer for a disabled person, I write a blog that regularly focuses on this subject. If any Telegraph readers want to know what’s really going on, I suggest they take a trip across to mikesivier.wordpress.com and read some of the comments from people who have actually been through the system. It might be a bit of a shock!”

I wonder if it has been moderated out of existence yet?

You noticed, I hope, that one area of government that didn’t get mentioned as a “genuine attempt to help” in the article was health? Is this an admission of guilt, I wonder.

Moving on, the article harks back to what the author clearly considers the Tories’ glory days, when Margaret Thatcher led the party during the 1980s: “Mrs Thatcher herself was not universally liked; nor was the party she led. The Tories won then because they promised to do tough but necessary things, which would give voters the chance to build a better life – and delivered.”

I was just trying to get my career started when Thatcher’s government was in power. “Give voters the chance to build a better life”? I can assure you, that didn’t happen unless you were a member of an exclusive club. For most of us it was oppression as usual.

The only difference now is, with this lot the oppression is worse, and so is the incompetence.

It’s impractical to expect the Conservative Party to change its ways at the moment because it is doing precisely what it set out to do: Shrink the state and sell off the most profitable bits to its friends in the private sector. Sorting out the economy has nothing to do with what’s actually happening, other than being a smokescreen.

The worst tragedy for the UK in 2015 will be if the Conservatives win.

Dire though it may be, the author of this article does have a point when turning to Labour’s tactics. “Labour’s announcements on welfare this week show a party devoted to double-counted, sock-the-rich gimmicks rather than the serious business of rescuing the public finances.” While this is almost indigestible, coming from someone who has just been extolling the hidden virtues of a party that has been pursuing a hidden agenda behind a smokescreen of nonsense justification narratives, I can’t see the point of Labour’s latest idea, either. Getting a six-month job for the long-term jobless? That’s just as pointless as the Tories’ current make-work schemes.

No, what we need to build up the UK economy again are some solid foundations. George Osborne missed his opportunity to make a start on this in his Autumn Statement, when he said he was cutting Corporation Tax again. It’s gone down by a huge 25 per cent since this government took office – why has he not attached a condition to it – that firms must use the money they save to employ extra staff and build their businesses back up to positions of strength?

At the very least, why did he not attach a condition that firms should build up the average salaries of their workers, to ensure that nobody in full-time employment need ever claim a state benefit? Remember, 60 per cent of the benefit cuts Osborne announced in the same Autumn Statement will affect working people just as much as the jobless.

If those workers were properly paid, then the benefit bill might be smaller and the cuts might not be necessary. Doesn’t that make sense?

The Tories are starting 2013 in the way to which we have all become accustomed: Omnishambles.

But now it’s time for Labour to raise its game. 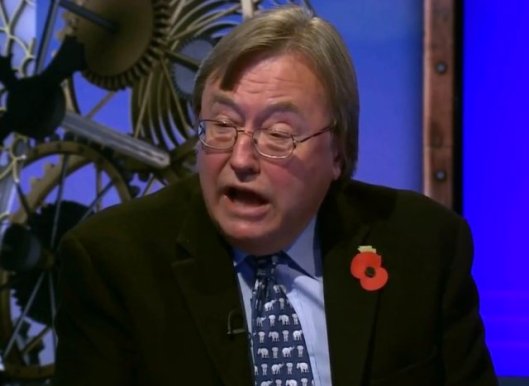 What are you supposed to think when a man who reportedly engaged in extra-marital toe-sucking antics, among other activities allegedly involving a Chelsea football kit, calls a child sexual abuse victim a “weirdo” on live TV?

What we’re seeing is utterly vile.

It’s the Establishment (such as it is) scrambling to salvage its reputation by smearing everyone around it.

We all know that the BBC’s Newsnight programme ran a report on Steve Messham’s allegations that he was abused as a child, by a person who was not named on television.

Speculation began on Twitter about the identity of that person (we all now know that he was wrongly identified as Lord McAlpine, the former Conservative Party Treasurer).

When David Cameron appeared on ITV’s This Morning show, presenter Philip Schofield handed him a list of names mentioned in the online speculation – members of the Conservative Party – and asked if the Prime Minister was going to discuss the matter with them.

To me, that seemed a conspicuous coincidence. The PM gets a list – and remember, this had been going on for some time up until then – and the very next day, any possibility of an allegation against the man who had – until then- been the most popular suspect is retracted. We can only hope that there was no foul play and this development is exactly what it seems to be.

It is strange that nobody at Newsnight had done that – showed Mr Messham a picture of Lord McAlpine. It should be admitted that the Newsnight report named nobody, but better safe than sorry (as the saying goes).

What’s stranger is that Mr Messham was shown a picture of his abuser and given the wrong name. I questioned this in an earlier article, and also asked why nobody in the mass news media had done likewise.

Well, now we know. An all-out attack on Mr Messham appeared in today’s Mail, stating that he was branded an unreliable witness, assaulted a lawyer at an inquiry, triggered a £400,000 libel payout after making a previous false sex abuse allegation, and was tried for fraud. “Even his lawyer says he may have invented stories”, the report trumpeted.

It was co-written by somebody calling him- (or her-) self ‘David Rose’. Now, here’s where it gets interesting. It seems David Rose was once a pseudonym for the journalist Johann Hari, who used the name to make “malicious edits of several of his critics’ Wikipedia pages” (according to Wikipedia itself) an allegation he later admitted in an Independent article.

“In a few instances, I edited the entries of people I had clashed with in ways that were juvenile or malicious: I called one of them anti-Semitic and homophobic, and the other a drunk,” he wrote.

Now, I’m not saying the ‘David Rose’ in the Mail is Johann Hari using his pseudonym, but I am saying it is interesting that the writer has chosen a name that is associated with fabricated smear pieces. It leads inquiring minds to question the authenticity of what we’re seeing.

Finally – the crowning travesty, if you will – we were presented with David Mellor (a man whose own questionable – in a different way – sexual history is well-documented) on today’s Sunday Politics, using the Mail smear piece to justify calling Mr Messham a “weirdo”.

He said: “They rely on a man who, you know, the Mail on Sunday reveals over two pages, that this man is a weirdo.”

Mr Mellor himself has a chequered history with the popular press. Besides the toe-sucking, Chelsea kit-wearing dodginess, he had called for curbs on press freedom in 1992, claiming that the popular press “is drinking in the last-chance saloon”. He must be delighted to be involved in this.

Job done. Messham discredited. Newsnight discredited. No need to investigate the possibility of paedophiles in the Conservative Party.

And what will be the long-term result? Paedophile victims will be even more afraid to come forward than they were before. Therefore abuses will continue. They may even become worse.

There are several online ‘memes’ that mock the Conservative Party by calling them “SelfServatives”. In what has happened over the last week, the Conservative Party has proved its critics correct. In covering its own collective rear – no matter what it took – it has ensured a victory for paedophiles across the UK and a crushing defeat for victims of this hideous sex crime.

All those involved in this little damage control exercise, from Mr Cameron, to ‘David Rose’, to David Mellor, and whoever else was enlisted to help out, should be ashamed of themselves – both for what they have done and the cack-handed way in which they have done it.

They have proved yet again that they are, in the words of Aneurin Bevan, “lower than vermin”.