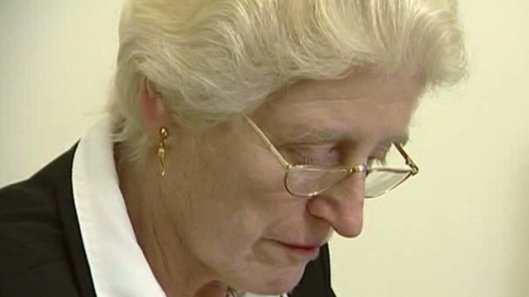 Would anybody argue with the suggestion that the social media – including blogs like Vox Political – played the largest part in the removal of Baroness Butler-Sloss from the government’s inquiry into historical child sex abuse investigations?

Until yesterday, Lady Butler-Sloss was adamant that there was no reason she could not head up the inquiry, even though her past associations with people she might have to investigate included her own brother, the late Sir Michael Havers, who was attorney general in the 1980s.

It was the social media that found this information and revealed it to the general public – who then complained bitterly to the government.

Do we believe Lady Butler-Sloss where she tells us she “did not sufficiently consider” whether her family links would throw the inquiry into question? It seems extremely out-of-character for a former judge, who would never – for example – have allowed a trial jury to include a relative of the defendant, to claim that she could be impartial about matters involving her own family. It was a clear conflict of interest.

One point that has been glossed-over is the fact that this woman is nearly 81 years of age and from the same privileged background as many of the people she would be asked to investigate. Did she even have the necessary sensibilities – or even the ability to open her mind to current thinking – required to head up an investigation such as this?

Of course, Lady Butler-Sloss was appointed by the Home Secretary, Theresa May. She has been accused of failure to carry out “due diligence” – the necessary checks to discover if a candidate can be relied upon to be impartial – but has defiantly claimed that her choice was good.

“I do not regret the decision I made. I continue to believe that Elizabeth Butler-Sloss would have done an excellent job as chair of this inquiry,” she told the Home Affairs select committee. Really? Excellent by whose standards?

We know from Lord Tebbit that there was a ‘hush-hush’ culture in the Thatcher government of the 1980s. He said people thought the establishment “had to be protected”.

Then-Prime Minister Margaret Thatcher – who herself spent a great deal of time with serial child abuser Jimmy Savile – is now seen to have turned ‘Nelson’s Eye’ towards such accusations – the same eye with which he was able to make the claim, “I see no ships”. The eyes of history are likely to take a dim view of such blindness.

And of course the attitude she held is likely to pervade government even now, 30 years later. Perhaps Theresa May wanted this inquiry – which she had resisted for a long time – to be headed by a person who could be trusted not to rock the boat. Perhaps she had been told to select such a person.

Now we must wait for an announcement on a new chairperson. This also plays into the hands of those with skeletons (or worse) in their closets as it creates a delay.

Not only that, but we must all remain vigilant against the possibility that May will appoint another dud. The BBC’s report makes it clear that the requirement for a candidate to have a legal background and the security clearance necessary to be able to read confidential papers means it is hard to find anyone who is suitably qualified and is not part of the establishment.

We still do not know where this will lead and who will be implicated. People like Theresa May and David Cameron will want to protect members of their own Old Guard from retrospective vilification (if Lord Tebbit’s words are to be trusted), and it seems likely they will do everything in their considerable power to fob us off.

It is our responsibility to make sure they don’t. 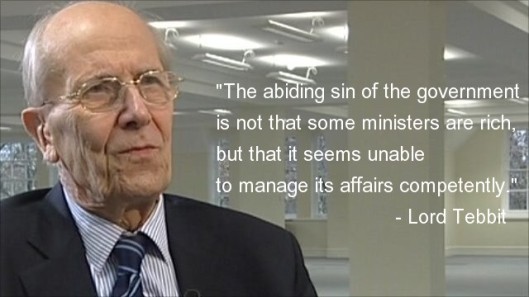 Exactly who does support David Cameron’s government these days?

He’s got Tory ‘grandees’ like Lord Tebbit calling it a “dog”; he’s got the 2010 intake of Tory MPs rebelling against him – presumably in the belief that they’ll have more chance of promotion through backstabbing than waiting for him to shuffle them into his ever-growing Cabinet; and he’s got Cabinet members who are themselves liabilities.

I suppose he should count himself lucky he’s got the support of all those corporate doners, pouring millions into Conservative Party funds in return for the billions of pounds worth of government or NHS contracts he’s been handing out to them (and the devil take the public, who won’t benefit at all).

The ‘youth revolt’ might be a serious threat to Cameron’s authority, but it is the attack from Tebbit that will be the most damaging. At a time when polling shows only one per cent of the population believes the Coalition is likely to be more competent than Labour, he made it perfectly clear that he thinks Cameron doesn’t know what he’s doing.

“This dog of a coalition government has let itself be given a bad name and now anybody can beat it,” he wrote in an Observer column.

“The abiding sin of the government is not that some ministers are rich, but that it seems unable to manage its affairs competently.”

This is an attack that the coalition will find hard to disprove, especially after Cameron’s hastily-announced plan to force energy companies into putting everyone on the lowest possible tariffs (of which the Energy Secretary and department apparently knew nothing). “Back-of-the-envelope” policymaking, as Ed Miliband might say.

“It has let itself be called a government of unfeeling toffs,” said Lord Tebbit.

Again – impossible to deny. Look at the Comedy Chancellor, George Osborne, sitting in a First Class train seat with a standard class ticket. One wonders if this will re-ignite the debate over rail ticket pricing – as they are clearly too costly even for a millionaire like him…

And then of course there’s Pleb-gate, or Gate-gate – the saga of the short temper and long decline of now-former Chief Whip Andrew Mitchell. Whether he actually called a Downing Street police officer a “pleb” or not is immaterial, and has been ever since it was first reported; that was the moment the public made up its collective mind and Cameron should have known it. Instead he hung on to a lost cause, dragging his entire administration down as the story dragged on.

Mitchell’s replacement is Sir George Young, a man who is on record has having described the homeless as “What you step over when you come out of the opera.” He has been described on the Void blog as “a stuck-up, not so nice but dim, advert for class war” and as a “chinless f*cking wet-wipe”. In other words, he’s likely to be even more unpopular than Mitchell.

Lord Tebbit, who – we are told – represents a growing number of senior Tories who are questioning whether Cameron has the qualities necessary to lead a government, said Cameron must impose “managerial discipline, not just on his colleagues but on himself.”

He continued: “Had Mr Miliband concentrated his fire on a long list of muddles – from the proposed sale of our national forests to the BAE and energy policy muddles of recent days, it would have been far worse.”

With respect, Lord Tebbit, Mr Miliband didn’t have to – you did it yourself.

And with friends like these, Cameron doesn’t need enemies. The Nasty Party’s reputation for back-stabbing is well-deserved.