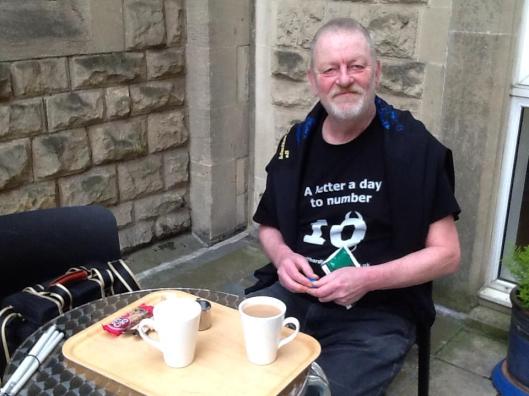 Energising: Keith Lindsay-Cameron prepares to take his case to the police.

An activist from Somerset is raising his own ‘Shoestring Army’ to crowdsource funds and mount a legal challenge against the government’s new Claimant Commitment for jobseekers, after police said they were unable to arrest Iain Duncan Smith and Lord Freud for breaching the Human Rights Act.

Keith Lindsay-Cameron, of Peasedown St John, near Bath, was advised to obtain the services of a solicitor and raise a legal challenge in the courts after he made his complaint at Bath police station on Friday (May 2).

He said the conditionality regime that is part of the new Claimant Commitment will re-cast the relationship between the citizen and the State – from one centred on ‘entitlement’ to one centred on a contractual concept in which the government provides a range of support only if a claimant meets an explicit set of responsibilities, with a sanctions regime to enforce compliance.

According to Mr Lindsay-Cameron, this amounts to the reintroduction of slavery. Forced compliance – through the sanctions regime – means people will be denied the means of survival if they fail to meet the conditions imposed on them. Deprivation of the means of survival, he claims, also breaches the act’s guarantee that everybody has the right to life and should not be deprived of it.

“The civilian desk receptionist asked my business and I gave her a verbal breakdown – that I had come to accuse Iain Duncan Smith and Lord Freud of crimes under the Human Rights Act 1998,” said Mr Lindsay-Cameron, who is better-known to thousands of readers as the author of the A Letter A Day To Number 10 internet blog.

“The Claimant Commitment contract means the loss of access to any benefits if one refused to sign, and benefit sanctions if one was considered to be in breach of the signed contract. Either way, this amounts to forced labour and therefore slavery.

“I was asked for more details and explained that a sanction – loss of benefits – meant the loss of the means of survival. I said we had not come to ridicule the police or to challenge them, but that they existed as our – ordinary folks’ – doorway to justice and that what I was doing there was asking for their help and that I was personally in the system and that we all needed help.”

But a police inspector told the activist, and the small group who attended to show their support, that officers at his station could not deal with the matter.

“I explained the situation and what the coercion of sanctions meant and that this did not constitute anything normal as a civic obligation under the human rights act – and I pointed out that if he made a mistake, he would not face a loss of a month’s income, nor three months’ for a second error or three years’ loss of income for a third infraction,” said the campaigner.

“He explained to me that, under the law, Iain Duncan Smith and Lord Freud were upholding the laws that they had made and that – whatever I felt about that – they had no case to answer and that his job as a police officer was to enforce the law.

“He said that I would need to obtain the services of a solicitor and raise a challenge in the courts for a judge to decide whether the actions of Duncan Smith and Freud were a breach of human rights.”

He said this process was already under way. The group has bought the internet domain name theshoestringarmy.com and will now start the process of a challenge.

Mr Lindsay-Cameron added that his visit to Bath Police Station was delayed when he stopped to meet a group of homeless people in the churchyard next door, while police were trying to move them on.

“It gave us a bizarre sense of what we were about to embark on,” he said.

“Where do people go, having nothing and welcome nowhere, in the land of the growing dispossessed?”