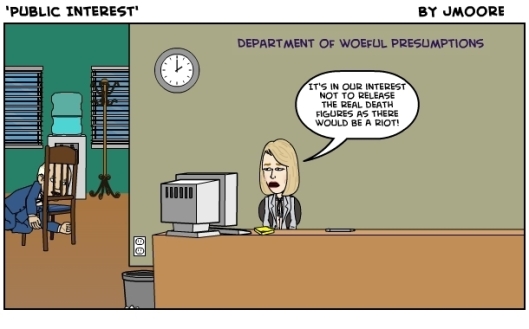 Public interest, not party interest: Thanks to Jim Moore for this cartoon. I’ve been waiting for a good moment to release it. Notice Iain Duncan Smith’s face looks like it’s behind bars – which is where many people believe he ought to be!

“The DWP has quietly decided to ditch statistics it used to collect on the number of deaths of recipients of incapacity benefits (now ESA) and its predecessors Incapacity Benefit (IB) and Severe Disablement Allowance (SDA),” according to Liberal Conspiracy.

The story, by Sunny Hundal, claims: “It is thought the numbers of deaths has sharply increased since the Coalition government’s severe cuts to social security benefits.

“But to ensure that deaths aren’t cited as evidence of failure of the changes, the DWP won’t be collecting and updating its statistics.”

No supporting information is provided and nobody from the Department for Work and Pensions is quoted. Does this change the chances of success for my Freedom of Information request, in which I asked for statistics in ESA/IB claimants who have died?

I requested statistics for 2012, which we all know already that the DWP has collected. They are there; they should be available.

The fact that they aren’t open for inspection is already incriminating, if you ask me!

My FoI request will be granted in the near future – even if the DWP finds another reason for refusal, the Information Commissioner’s office will overrule it. I’ve been through the rules. In this instance, it is Iain Duncan Smith who doesn’t have a leg to stand on.

If the DWP then claims that it has destroyed the figures – as seems to be claimed by the Liberal Conspiracy story – then we’ll be looking at a criminal investigation, I think.

This would not only indicate the failure of Iain Duncan Smith’s policy – after everything he and his ministers have said, time and time again, about the fairness of the assessment regime, and how it is carried out in a humane way, this would prove that it is neither fair nor humane – and that, given the opportunity to stop the deaths from accelerating, these Conservative politicians allowed them to continue.

If a person knows that their actions are causing people to die, and does nothing about it, then an observer may rightly conclude that this person wants those deaths to take place. There’s a word for people who cause others to die – with the intention of causing them to die.

That word is “murderer”.

Or in this case, “mass murderer”.

Nobody will think it is a coincidence, if the DWP really has binned its statistics on claimant deaths at a time when public interest is focused on the issue.

And to any DWP interlopers, reading this site because it is on a ‘watch list’: This is a very dangerous time to be working for that organisation. People who help others to commit murder are accessories to the crime and may also be convicted for the offence.

It seems the London NHS Risk Assessment that was sent to the central Department of Health civil servants drawing up the Risk Register & Report (the document that Andrew Lansley refuses to publish, contrary to a ruling by the Information Commissioner), has been leaked and is now public knowledge.

According to the information in this document, London NHS’s Risk Register explicitly warns that the financial viability of the Tory NHS Bill is seriously questionable, predicting “deteriorations in the financial positions of one or more NHS organisations”.

The London NHS risk report categorically states that commissioning groups run by GPs may “not be able to secure [services] […] within the running cost range”.

This means the “quality” of health care may be “poor”.

Please ask your MP to sign this Early Day Motion calling for the Risk Register to be published.