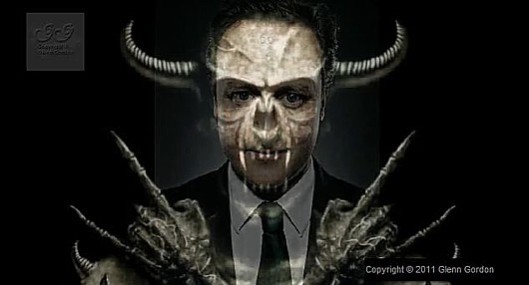 Face the facts: David Cameron has been sucking up to Hindus, Jews and now Christians because he wants religious people to vote for his Conservatives – in the same way Satan, the great deceiver, tries to lure the righteous into sin. If he worships any religious figure, it is Mammon, the personification of greed.

Perhaps he’s had a breakdown in the wake of the Maria Miller scandal.

Visiting Christian leaders were no doubt amazed to hear the leader of the most evil British government in decades telling them he has been doing “God’s work”.

David Cameron told them his Big Society concept – the vain attempt to get volunteers to do for free what public sector workers did before he sacked them all – was invented by Jesus of Nazareth, in Roman-era Israel.

Trying to start another war, David?

He won’t be fighting the Jews, it seems. Only last month he delivered a strongly pro-Jewish speech to the Israeli Knesset (their Parliament), supporting the religious slaughter of animals to make Kosher meat (in the face of calls for more humane methods) and rejecting calls to boycott goods produced in Israeli settlements like the occupied West Bank.

He even mentioned the fact that he had a Jewish great-great grandfather, although the Daily Mail reported, “he made no mention of reports that he may be descended from Moses”.

Cameron has also prostituted himself for the Hindu vote.

But let’s get back to his claim that his policies come from Christ himself. On the day Cameron finally accepted Mrs Miller’s resignation, he had nothing to say about the choice of music accompanying his Easter reception in Downing Street (Ave Maria). Instead, he told Church leaders that, if they believe there are obstacles preventing them from doing more to support his failed pet project, they should think of him as “a giant Dyno-Rod”.

If anything in this country deserves to be flung down a drain, it’s David Cameron.

Vox Political deplores the manipulation of religion for political ends
… but we need YOUR help to do so.
This independent blog’s only funding comes from readers’ contributions.
Without YOUR help, we cannot keep going.
You can make a one-off donation here: