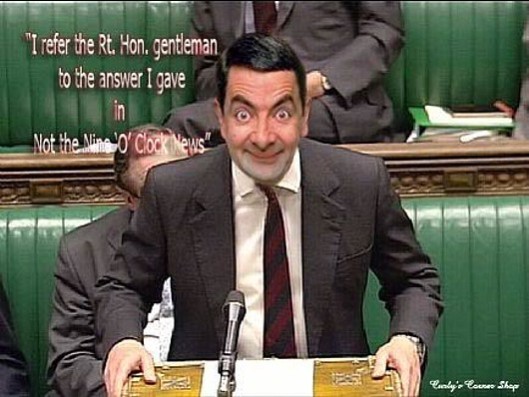 Mr Os-bean: As Ed Miliband gave his response to the Budget, George Osborne had a gormless smile on his face that made him look like Mr Bean. This is not him – but it’s the closest image I could find at short notice. [Image as credited]

If a Conservative government is returned to office after the 2015 election, there will be yet more spending cuts and service cuts afflicting hard-working, low-paid families.

That was the message for most people in George Osborne’s latest attempt at a Budget speech today.

There were plenty of groan-worthy moments as the part-time chancellor trotted out the Coalition’s catchphrases: “We will fix the roof while the sun is shining” (groan. The job is taking so long, one has to question whether the contractor is Con-ning the client). “We are all in this together” (groan). Oh really?

Benefit spending is to be capped at £119 billion per year, albeit rising with inflation; public sector pay “restraint” will continue for the foreseeable future. This is from the government whose Prime Minister was confirmed, only minutes previously, as having approved 40 per cent pay rises for his special advisors!

Most significant is the fact that Osborne avoided mentioning ordinary working people for most of his speech; this was a budget for businesses, with the benefits reserved for fatcat bosses.

No major advanced economy in the World is growing faster than the UK, said Mr Osborne; more people are in work. This appears to be borne out by current employment figures (although it should be noted that this is due to a vast and questionable boom in self-employment – the number of employees has dropped by 60,000).

Where is the benefit to the British economy? Why has the deficit not been eliminated? Osborne said it stood at £157 billion in the year he came to office, and would be £108 billion this year, but in fact £39 billion was removed due to measures brought in by the previous Labour chancellor, Alistair Darling. He has cut government spending by something like £80 billion so far, but the deficit has dropped by – possibly – £10 billion. Not a good start to his speech.

There will be further investment in high-speed rail, even though there is no way of predicting whether this hugely costly investment in making train journeys 20 minutes faster will create any economic improvement.

There will be money to fund new centres for medical research – but will these be absorbed by private health firms after the public purse has paid for them?

There will be investment in faster extraction of oil from the North Sea – aiming to get as much as possible out before the Scottish referendum, in order to impoverish the Scots if they decide to go for independence?

And there will be investment in low-cost energy (finally killing the highly questionable green agenda) – meaning money for shale gas companies, and to hell with the environmental cost.

All this investment will go into businesses whose main contribution to the Treasury – Corporation Tax – has already dropped by a quarter (from 28 per cent to 21 per cent) and will go down to 20 per cent this year. This is less than the lowest level of Income Tax.

Up go the profits – down go the tax payments. Who benefits?

The personal tax allowance is to rise, so people may earn £10,500 before paying tax. This is nowhere near enough to offset the massive drop in living standards that has been caused by the Tory-led Coalition. The cost of living has risen for 44 out of the 45 months of this Parliament – for the whole period, if the earnings of high-paid bankers are removed from the calculation.

The threshold for payment of the 40p tax rate is to rise, so fewer people will pay the higher rate.

Savers are to be helped but – again – this is not a boost for the poor. Most working and unemployed families don’t have any spare money to put into the banks. How does it help them to know they would not pay any tax on savings up to £15,000 in an ISA, when they cannot afford to open one?

And there is a new Pensioner Bond for rich senior citizens (poorer pensioners don’t live long enough to benefit).

As Ed Miliband said in his scathing response, the Coalition can afford to give a tax cut of £200,000 per year to bankers who earn £5 million – but can’t afford £250 per year extra for nurses.

Mr Miliband said the Budget speech was more significant in what it hid than in what it actually said.

Working people are suffering under the Bedroom Tax, under cuts to their tax credits, and they are having to visit food banks if they want to eat.

This is a government that gives with one hand, but takes back much more with the other.

And the Conservatives have the bare-faced cheek to call themselves “The Workers’ Party”.

Vox Political won’t earn more than the personal tax allowance.
We don’t receive any funding other than contributions from readers.
Without YOUR help, we cannot survive.
You can make a one-off donation here: