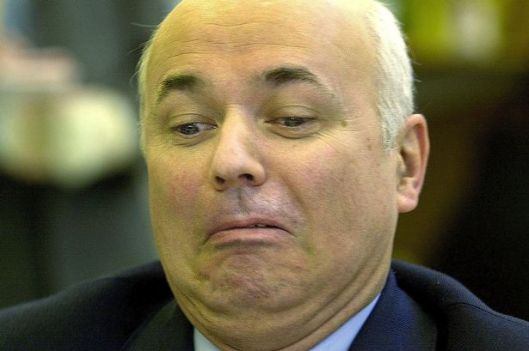 Picture the scene if you can: It’s shortly after 11.35pm on Thursday (June 5) and all my inboxes are suddenly overflowing – with the same message: Iain Duncan Smith will be on Question Time next week.

The implication was that there is an opportunity here – to show the public the homicidal – if not genocidal – nature of the changes to the benefit system this man mockingly describes as “welfare reforms”.

We were given the name of only one other panellist who will be appearing in the June 12 show, broadcast from King’s Lynn: Private Eye editor Ian Hislop. He is certainly the kind of man who should relish a chance to take the politician we call RTU (Returned To Unit) down a peg or two – in fact the Eye has run articles on DWP insanity fairly regularly over the past two decades at least.

Personally I’d like to see him joined by Michael Meacher and Owen Jones, at the very least. A rematch between Smith and Jones would be terrific television (but it is unlikely that the coward IDS would ever agree to it).

All such a panel would need to get started is a question about “welfare reform”. Then they could start at the beginning with the involvement of the criminal US insurance corporation Unum, which has been advising the British government since Peter Lilley was Secretary of State for Social Security. There appears to be a moratorium on even the mention of Unum in the British press so, if this is the first you’ve heard of it, now you know why.

Unum’s version of an unproven strand of psychology known as biopsychosocial theory informs the current work capability assessment, used by the coalition government to evaluate whether a claimant of sickness benefits (Incapacity Benefit/Employment Support Allowance or Disability Living Allowance/Personal Independence Payment) should receive any money. The assessment leans heavily on the psycho part of the theory – seeking to find ways of telling claimants their illnesses are all in the mind and they are fit for work. This is how Unum wormed its way out of paying customers when their health insurance policies matured – and it is also how Unum received its criminal conviction in the States.

Here in the UK, the work capability assessment appears to have led to the deaths of 3,500 ESA claimants between January and November 2011 – 73 per week or one every two hours or so. These are the only statistics available to us as the Department for Work and Pensions stopped publicising the figures in response to a public outcry against the deaths.

Members of the public have tried to use the Freedom of Information Act to pry updated figures from the DWP. I know of one man who was told that the 2011 figures were provided in an ‘ad hoc’ release and there was no plan for a follow-up; the figures are not collected and processed routinely. The last part of this was a lie, meaning the DWP had illegally failed to respond to a legitimate FoI request.

Having seen that individual attempts to use the FoI Act to get the information had failed, I put in a request of my own and suggested others do the same, resulting in (I am told) 23 identical requests to the DWP in June last year. Apparently this is vexatious behaviour and when I took the DWP to a tribunal earlier this year, it won.

But the case brought out useful information, such as a DWP employee’s admission that “the Department does hold, and could provide within the cost limit, some of the information requested”.

Now, why would the Department, and Iain Duncan Smith himself, want to withhold these figures – and lie to the public about having them? It seems to me that the death toll must have increased, year on year. That is the only explanation that makes sense.

The DWP, and its Secretary-in-a-State, have had their attention drawn to the deaths many times, if not in interviews then in Parliament. DWP representatives (if not Mr Duncan Smith himself) have taken pains to say they have been improving the system – but still they won’t say how many deaths have taken place since November 2011.

If it can be proved that DWP ministers were aware of the problem (and we know they are) but did not change the situation enough to slow the death rate (as seems to be the case), then it seems clear that there has been an intention to ignore the fact that people have been dying unnecessarily. This runs against Human Rights legislation, and a strong case could be made for the corporate manslaughter of thousands of people.

When we come to PIP, there’s the issue of the thousands of claimants who have been parked – without assessment – for months at a time, waiting to find out if they’ll receive any money.

Universal Credit currently has no budget, it seems, but the DWP is clearly still wasting millions of pounds on a project that will never work as it is currently conceived.

It would be nice to think that at least one member of Thursday’s panel might read this article and consider standing up for the people, but it’s a long shot.

Possibly a million-to-one chance, in fact.

According to Terry Pratchett, that makes it an absolute certainty!