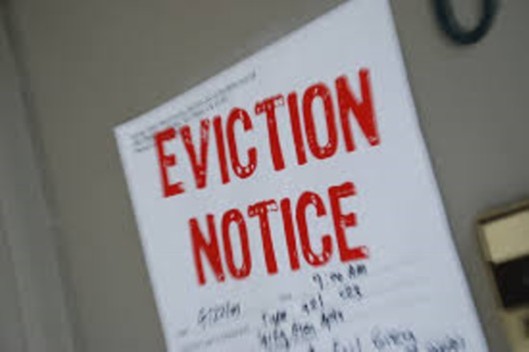 It is easy to get caught up in headlines and forget that the Coalition’s benefit reforms mean people you know will lose their homes.

You know what happens then? PEOPLE YOU KNOW START LOSING THEIR HOMES.

Vox Political was warning the world about this back in 2012 – nearly two years ago – saying the bedroom tax would put people on the streets while homes go empty and warning about the ‘Poll Tax revival plan to take away your home’. It gives me no pleasure at all to report that I was right.

This week I heard about two cases in my Mid Wales town. You may think that isn’t many, but this is a town with a population of less than 5,000 – and I haven’t heard about every case.

The first involves a family that has been living in the same council house for more than 30 years. Sadly the head of the household recently had a stroke and has been forced to move into a care home. In the past, the tenancy would have been handed down to the next generation of the family – two sons, one of whom has a family of his own. The other is a friend of mine, of excellent character. By day he works very hard at his job; after hours, he is a member of a popular local band (along with his brother, as it happens). They are what this government would call “strivers”.

But they are being penalised because they have been told to vacate the only home they have had. Not only that, they are being asked to stump up a small fortune in backdated rent (as their father has been paying for his care, not the house) and another small fortune to dispose of carpets they cannot take with them, which the council does not want.

When I spoke to my friend yesterday, he told me that the council simply does not want him or his brother as tenants because “it is easier to process a large family who are on benefits”. I queried this, and it seems likely that this is to do with the forthcoming Universal Credit system, and with the Council Tax Reduction Scheme (also known as the Pickles Poll Tax); it is easier to handle Universal Credit and council tax claims if the authorities have foreknowledge of a household’s income.

We both agreed that there is a serious drawback to this thinking.

Large families do not want to move into vacant social accommodation because they fear what the government – national and local – will do to them if their circumstances change. Children grow up; adults move out – and that will make them vulnerable to the Bedroom Tax. Suddenly their benefits won’t be enough to pay the rent and they, in turn, will be turfed out onto the streets. They know it is a trap; they will try to avoid it.

My friend agreed. “That house is going to stay empty for a very long time,” he said.

This is madness. Here are two people who are perfectly willing and able to pay the council’s rent, on time, for as long as they need the property but, because of the Welfare Reform Act and the Localism Act, the council is treating them abominably and the house will end up providing no income at all.

If you think that’s bad, though, just wait until you learn about my other friend!

He is an older gentleman who has been disabled for many years. He had been living in a small, two-bedroomed house that had been adapted to accommodate his needs. We know precisely how much these adaptations cost to install at current rates: £5,000.

I believe he needed the extra bedroom to accommodate carer needs but I could be mistaken.

Along came the Bedroom Tax and suddenly he did not have enough income to cover the cost of living there. The council (or social landlord, I have to admit I’m not sure) sent him an eviction notice. He appealed.

Guess what? His appeal was set to be decided after the date he was ordered to be out of his home.

So he had to go. He was lucky enough to find another place to live, and all the equipment he needs to accommodate his disability moved along with him – at a cost of £5,000.

Then he received the judgement on his appeal: He was exempt from paying the Bedroom Tax; he should never have been forced to move.

Is this British justice?

This country was once the envy of the world because we were far more enlightened than any other nation in our policies of social justice and inclusion. Not any more! Now we are regressing into a new dark age in which the squalid Shylocks infesting Westminster manipulate local authorities into performing grubby property grabs for them.

Is the ‘Bulldog Spirit’ that made us famous for standing our ground during the Blitz now being turned to hounding the poor out of their homes?

Are you willing to put up with this?

In Iceland, they marched to their Parliament and set up camp outside until the government gave up and agreed to the demands of the people. Here, an unmandated government rides roughshod over democracy while you sit at home watching The X Factor, Coronation Street and the Winter Olympics.

Nothing will change until you change it – but you know this already. The simple fact is that, if you are reading this article, you probably sympathise with the sentiments it is expressing and are already active in opposing the heinous crimes being committed against our people.

There are not enough of you. People who need to read these words are being allowed to live in ignorance, lulled into inactivity by the right-wing mass media.

It’s time to put an end to that. There can be no excuse for ignorance and inaction while people are being made homeless. Think of someone you know who needs to be shown the truth and make them read this article. Ask them what they think of it and explain the facts of what is happening around them.

Then tell them to pass it on to someone they know.

Spread the word – don’t keep it to yourself. And don’t sit on your thumbs and expect somebody else to do your bit for you. If you don’t act, why should anybody else? What’s the point of me writing these articles if you can’t be bothered to do anything about it? Are you going to wait until someone tells you they want your home?

Then it will be too late.

I’ll know if you succeed because it will be reflected in the number of times this article is viewed. I’ll report the results of this experiment next week.

Don’t let yourself down.