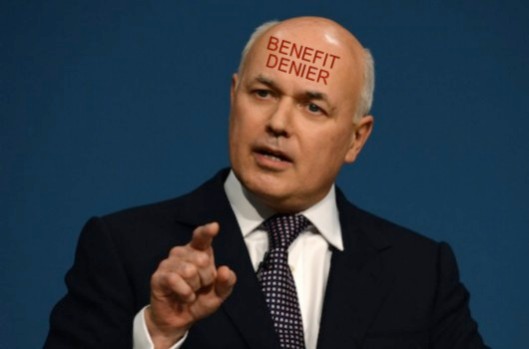 Like it or not, politics in the UK is far more nuanced today than it has been at any time in the last 100 years. How can it be anything else? All the main political parties are trying to occupy the same, narrow, centre-right ground.

Even so, one man has emerged as the pantomime villain of British politics: Iain Duncan Smith.

ConservativeHome readers regularly vote him into the top slot as the most popular cabinet minister – but it seems that anyone who has ever had dealings with his Department for Work and Pensions has the exact opposite opinion of him. He has been nicknamed IDS, but this blog calls him RTU instead – it stands for ‘Returned To Unit’, a military term for serving soldiers who have failed in officer training and have been returned in disgrace to their original unit (the implication being that his claim of a glittering military career is about as accurate as his claims to have been educated at the University of Perugia and Dunchurch College of Management).

Here at Vox Political, we believe that this man’s tenure at the DWP will go down in history as one of the greatest disasters of British political history – not just recent history, but for all time. It is our opinion that his benefit-cutting policies have done more to accelerate the impoverishment of hard-working British people than the worst recession in the last century could ever have done by itself.

We believe the assessment regime for sickness and disability benefits, over which he has presided, has resulted in so many deaths that it could be considered the worst genocide this country has faced since the Harrowing of the North, almost 1,000 years ago.

That will be his legacy.

On Sunday, he will appear on the BBC’s Sunday Politics show to answer your questions about his work. The show’s Facebook page has invited readers to submit their own questions and this seems an appropriate moment to highlight some of those that have been submitted – but are never likely to be aired; RTU is far too vain to allow hyper-critical questioning to burst his bubble.

Here is our choice of just some questions he won’t be answering:

“Why [has he] decided to cover up the number of suicides due to [his] benefit cuts?” “Why is he killing the elderly and the disabled?” “Does he have a figure (number of deaths) before he accepts a policy might not be working?”

“Universal Jobmatch, Universal Credit, WCA reforms, PIP; are there any policies and projects he has tried to implement that haven’t been a massive shambolic waste of money, causing distress and sanctions to so many people?”

“Would he like to comment on the huge amount of people wrongly sanctioned, and would he like to explain why whistleblowers from the JCP have admitted there are sanction targets?”

“Ask him if he believes a comparison can be drawn between the government’s persecution of the sick, disabled and mentally ill and the ‘Action T4’ instigated by the Nazis in 1939. I am sure the tow-the-line BBC will give him sight of the questions before he gets on the show so he will have time to look it up.”

“People are now waiting months for their appeals to be heard and the meantime their benefits are stopped. What does he expect them to live on? Why [are] he and his Department pursuing this deliberate war against some of our most poor and vulnerable people?”

“Could he comment on the massive amount of money written off due to failures with the Universal Credit?”

“Why are we paying private companies to test disabled and sick people when one phone call to their consultant or GP would provide all relevant details they need?”

“[Does] he have any intention of putting his money where his mouth is, [living] on £53/week, and how does he square that with the £39 on expenses he claimed for breakfast? Half a million people signed the call for him to do so.”

“Why are full time carers who look after loved ones only paid £59.75 a week? Less than JSA, indeed less than any other benefit! they save the tax payers millions, and yet have still been hammered by the changes in housing benefit, council tax benefit and of course the hated bedroom tax.”

“Ask him about the Universal Jobsearch website and the fake jobs on the site. As a jobseeker, this site need[s] better monitoring.”

“Ask him if the bedroom tax was really just a deceitful way to remove all social housing and force people into private rentals for the rich to claim housing benefits paid to claimants.”

“Does he think that paying subsidies to supermarkets and other private companies via welfare benefits because they do not pay well enough is what government should be doing?”

Some of the questioners address Mr… Smith directly:

“Why do you keep testing people with incurable progressive illnesses? Once found unfit to work, [they] never will get any better so to retest is stressful, cruel, and not needed.”

“Why are you telling Jobcentre Plus staff to get ESA claimants and JSA claimants to declare themselves self-employed, then reeling them in with the promise of an extra £20 per week? Is this why the unemployment rate fell last quarter?”

“Do you feel remotely guilty for the lives you’ve ruined? the lies you’ve told? The dead people on your hands? Do you feel any shame at all that you’ve done all this and more? Do you sleep well at night knowing there are people who can’t feed their children because of you?”

“As a committed Roman Catholic, how does your conscience deal with you supporting and advantaging privileged millionaires while you personally and systematically further impoverish the poor and disadvantaged?”

“Does he feel ashamed to have caused so much suffering, because he flipping well should!”

There were many more questions that were not appropriate for repetition.

To see what he does have to say for himself, tune in to Sunday Politics on BBC1, starting at 11am on March 9 (which is, as you might have guessed, Sunday).

Just don’t get your hopes up.

Vox Political is an independent political blog.
We don’t receive any funding other than contributions from readers.
Without YOUR help, we cannot keep going.
You can make a one-off donation here: 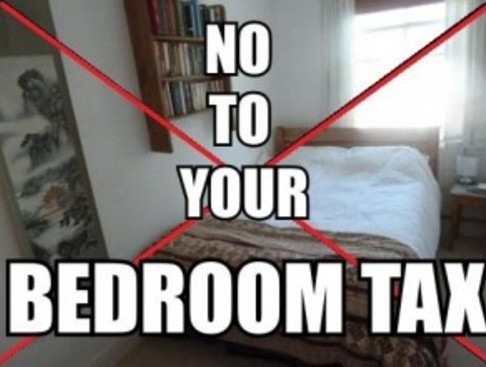 Campaigners in the UK have been celebrating after they found a little-known regulation that exempts many social housing tenants from the Bedroom Tax.

The Housing Benefit and Council Tax Benefit (Consequential Provisions) Regulations 2006 state (in not so many words) that, if you have been in receipt of Housing Benefit since before January 1, 1996, then you are exempt from the Bedroom Tax.

Many people have seen this as a considerable victory, as it may affect a large proportion of the 660,000 households hit by the spiteful tax. Everyone who has lost money because of it has been urged to check whether they can appeal on these grounds.

Some have noted, with sadness, that people who have died – like Stephanie Bottrill  – might still be with us if we had earlier knowledge of the regulation.

Now here’s the bad news: You have to have proof that you have been in receipt of HB since before January 1, 1996, or the authorities will ignore any exemption request.

Or, as a Vox Political commenter put it: “Just been on to HB as we should be free of this bedroom tax and they just told us we need proof of being here since this time scale which after all these years we don’t. And they said their records only go back six years. My God, they just won’t have it, will they? So stuck again as no proof as housing and DHSS don’t go back to 1/jan 1996.”

How many others are in the same situation?

Worse still, look at this comment from a DWP spokesman, published in the Morning Star‘s coverage of the story: “”We are aware of a potential regulatory issue in relation to pre-1996 social sector housing benefit tenants and the removal of the spare room subsidy,

“We are looking at this carefully and will take any necessary action to clarify our position as soon as possible.”

We all know what a DWP clarification is; it’s legislation to ensure that the regulation is removed – in order to ensure that the cock-up is erased from history and there continues to be no obstacle to Iain Duncan Smith’s plan for the impoverishment of the masses.

That’s what he tried with Workfare, after all – even if he couldn’t get it right.

Vox Political needs your donations more than ever before! It is funded entirely by donations and book sales.
This site needs YOUR support to continue.
You can make a one-off donation here: