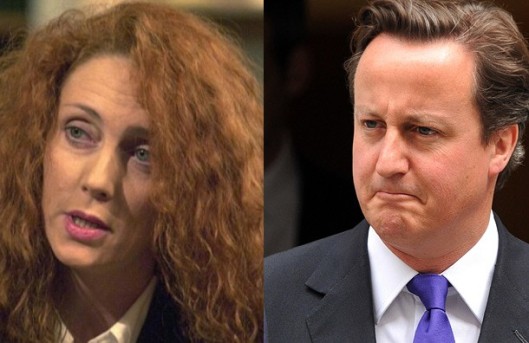 I asked this before, and I’m still asking now: What have they got to hide, and can it be any worse than what we’re all thinking?

Why is it that Rebekah Brooks and Andy Coulson have both been charged with crimes of corrupt payments to public officials, but their good friend David Cameron – perhaps the most public official in the UK – is able to evade investigation?

If his emails and text messages to Mrs Brooks were innocent, then why have they still not been made available to the public – as they should have been during the Leveson inquiry – and as promised after a Freedom of Information request elsewhere on the Internet?

Mrs Brooks and Mr Coulson are among five people facing charges that they made corrupt payments to police and public officials. She is a member of the ‘Chipping Norton set’ and a close friend of Mr Cameron, as we know from the fact that there is a wealth of email and text correspondence between them – all innocent, we are told – that we have been prevented from seeing. He is a former Downing Street communications chief who was previously editor of the News of the World, under Mrs Brooks.

Also facing charges are journalists Clive Goodman – former royal correspondent of the News of the World – and John Kay – formerly chief reporter at The Sun – and Ministry of Defence employee Bettina Jordan Barber.

Mr Coulson and Mr Goodman will be charged with two conspiracies, relating to the request and authorisation of alleged payments to public officials in exchange for information, including a royal phone directory known as the ‘Green Book’.

The two counts of conspiracy to commit misconduct in a public office involve one between 31 August 2002 and 31 January 2003 and another between 31 January and 3 June 2005.

Ms Barber, Mr Kay and Mrs Brooks face one count of conspiracy to commit misconduct in a public office between 1 January 2004 and 31 January 2012.

None of these charges suggest any wrong-doing by our comedy Prime Minister, I should stress.

But he is a long-term friend of Mrs Brooks and Mr Coulson, and his correspondence has been kept hidden for so long that I’m sure I’m not the only one smelling something rotten here.

The current line from the Conservative Party on this matter is that we all (and especially the Labour Party) need to “change the record”.

It was made by Cabinet Office minister Francis Maude, while emphasising the government’s programme on transparency.

Labour’s Chris Bryant asked, if that was the case, when Mr Maude would publish the “large cache” of emails relating to Mr Coulson [and] Mrs Brooks, and that was his answer: “The honourable gentleman needs to change the record.”

He can’t “change the record”. His question relates to a vitally important matter: Is there any evidence to suggest the Prime Minister of the UK may be implicated in alleged criminal actions by his close friends?

The longer we have to wait for an answer, the more suspicious this affair seems.