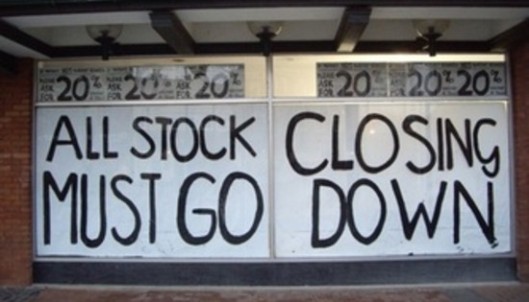 I had a look at the BBC News website’s business page yesterday. What do you think caught my eye?

It seems sales dropped off by 0.1 per cent (seasonally adjusted figure) last month, while the quantity of goods sold rose (rose? shurely shome mishtake, unless prices have magically dropped) by a worse-than-expected 0.3 per cent.

Isn’t December supposed to be the busiest shopping month of the year, with everyone rushing to buy Christmas presents and get the food in? I know the news wasn’t totally awful – sales were still up 0.7 per cent on the same time last year – but it does look like a darkening of the skies before the storm blows in.

Online sales increased, as one should reasonably expect – this is the current trend. But what I found worrying was the drop in sales of both clothing and food. They did “notably badly”, according to the BBC.

I would have thought these were two sales areas that would be relatively internet-proof. With clothing and food (and furniture), people like to see what they’re getting. They want to test it first, to make sure it fits their standards.

My concept of the High Street of the Future would have included clothes shops (or boutiques if you want to be all King’s Road about it), grocery stores (not necessarily supermarkets – how about farm-gate stores or farmers’ markets?), furniture stores, chemists and hairdressers/barbers. With possibly the odd gadget/technology shop for people who don’t trust the postman with fragile items. Also private doctor and dentist surgeries, for those who can afford to pay for them as the future gets worse for the NHS.

The rest will probably go. Blockbuster is closing 160 stores, according to the BBC business site today. That doesn’t surprise me in the least. Bosses should have seen the writing on the wall, when digital delivery became an option, and diversified into it. They didn’t; LoveFilm and the like took over and that was that. People who like holding physical copies of movies in their hands can get them from the glorified mail-order companies like Amazon, if they don’t mind giving their money to tax avoiders.

That’s why HMV lost the battle last week. Now I see that Game wants to buy some HMV stores. Wasn’t Game itself in danger of going out of business last April? I think it was, and I wouldn’t expect a business bought by such a firm to last very long, for that reason alone.

We have already discussed, in a previous article, the demise of Jessop’s.

To cap it all, panellists on the BBC’s Question Time last Thursday said a further 140 UK high street shopping chains were facing severe financial difficulty. One hundred and forty!

And that’s just at the moment.

What will happen after the government’s cuts to benefits kick in, ensuring that the poorest in the country, who use the highest proportion of their money as they receive it, have much, much less cash to spend?

Think of the rise in unemployment, as one retail chain after another hits the dirt. The growth in demand for social security (the government calls it “welfare”) benefits; the need to borrow even more money, increase the national debt even further; the increasing number of derelict buildings as our cities’ shops go empty – along with more and more homes, as families fail to keep up rent payments (their benefits won’t cover it) and they get kicked out onto the street; the lights going off across the UK as the Tory-led Coalition, helped by the Liberal Democrats, turns our home towns into ghost towns.

Let’s pause for a moment to remember that the Coalition government inherited an economy that was growing. It wasn’t booming, obviously, but it was going in the right direction. The very first thing this government did was kill that growth, and much of its economic policy since 2010 has been intended to make sure it stays dead.

To shrink the state. To starve the beast.

To end the social security system.

To privatise the NHS.

To keep wages low – and maybe even find opportunities to cut them.

We’ve got two more years with these chumps in charge. That’s plenty of time to ruin the UK beyond repair – or at least so badly that it will take decades to recover.

I think it’s time to put serious effort into making life as difficult as possible for them. we’ve had a few demonstrations in London over the last couple of years – perhaps it’s time to start putting something up every week, even if it has to start with only a couple of people standing outside the Houses of Parliament with banners saying “Coalition Out” and “Resign”.

If they want information from you, in order to put their changes into practice, find a way to slow the process as much as possible – obviously not in situations where there’s a threat to life and limb, but in other administrative ways, why not? Think of it this way: They want to complicate your life – why not return the favour?

In employment law, there is an offence called ‘Constructive Dismissal’. This is when an employer contrives to make a particular employee’s working life so difficult that he or she is effectively forced out the door. There is no such offence relating to the way a nation treats its government.

I’m not an advocate of violence; I’ll take passive resistance every time.

So let’s constructively dismiss the Coalition.