Take a look at the video above. Is it effective?

I think it is. A short message with a sting in its tail, coupled with a soundtrack that supports what’s being said by adding emotional connotations (‘Britishness’, turning to a harsh wind).

It’s a soundbite in video form – a videobite, if you like. Memorable, shareable – and easily debatable, because the message is so clear.

Conservatives are very good at putting out negative soundbites for their opponents. It would be useful to give them a taste of how it feels, so please share the video wherever you like.

Here’s another example of negative campaigning, found on the social media, on the subject of UKIP: 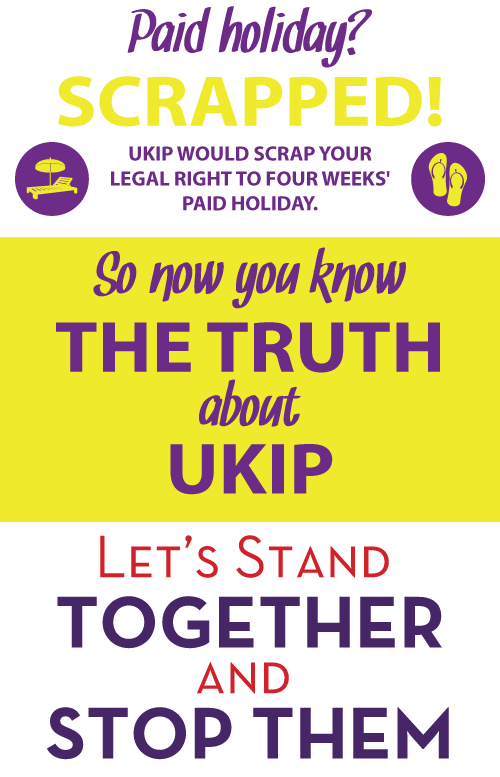 Nobody seems to talk about UKIP’s domestic policies. This was mentioned, to great effect, on the BBC’s Question Time yesterday (Thursday).

The trouble with this one is it’s a ‘deep’ poster, meaning you have to scroll down to see the end of it – so the effect is less immediate.

The sad fact is that both of the above are more effective than so-called ‘positive’ campaigning, in which a political party or its representative promotes its policies as better for the country than anyone else’s.

Yesterday, the Labour Party announced it will repeal the so-called ‘Gagging Law’ – The Transparency of Lobbying (etc) Act – if elected into Parliament. At the time it was passed, Vox Political said this marked the end of free speech and free protest in the UK and the article had a huge audience of more than 100,000. So this announcement should have been greeted with joy, right? What response do you think it got?

It has been read just 128 times and of the three comments on the site, two are hugely negative – the first words being “I’ll believe it when I see it”.

It shows how far politicians have fallen in our trust.

That’s why negative campaigning is on the rise.

It seems those who want the public’s trust can only earn it by showing that the others don’t deserve it.

Vox Political enjoys positive politics
… but we cannot promote it without YOUR help.
This independent blog’s only funding comes from readers’ contributions.
Without YOUR help, we cannot keep going.
You can make a one-off donation here:

I’m not saying someone in the Labour Party read Vox Political‘s massively popular article on the passing of the Transparency of Lobbying And Lots of Other Nonsense Act in Parliament, but the mention of free speech and the right to campaign (free protest) does indicate they’ve been paying attention to someone.

I’ve received the following from a commenter, Pat. It’s self-explanatory:

“This is the email i received this evening from Ed Miliband

“’Thank you for getting in touch with me about the gagging law. I’m sorry it’s taken me a while to get back to you.

“‘To hear from thousands of you was inspiring. It galvanised my belief that when people can stand up like you did and hold politicians to account our democracy is alive and well. And I have no intention of allowing the Tories and Lib Dems to silence you.

“‘So I want you to be the first to know: a Labour government will repeal David Cameron’s gagging law.

“‘I have been clear from the start that I oppose this gag on charities and campaigners, which was introduced with little consultation. If Labour wins the next election, we will remove it from the statute book.

“‘In its place we will legislate for real reform of lobbying, and we will consult with charities and campaigners on the reforms we need to both ensure transparency and protect freedom of speech.

“‘There is much wrong with this law — and that’s why we’re taking a stand against it. You had some specific questions for me in your original email. Here are specific answers.

“‘If we win the election next year, the Labour government I lead will:

“‘Thank you again for raising this issue with me. The health of our democracy depends on people’s right to campaign on the issues they care about. It must be protected.

I look forward to working with you to make sure the gagging law is repealed.’”

Vox Political refuses to be gagged in any event
… but we still need YOUR help to continue.
This independent blog’s only funding comes from readers’ contributions.
Without YOUR help, we cannot keep going.
You can make a one-off donation here: