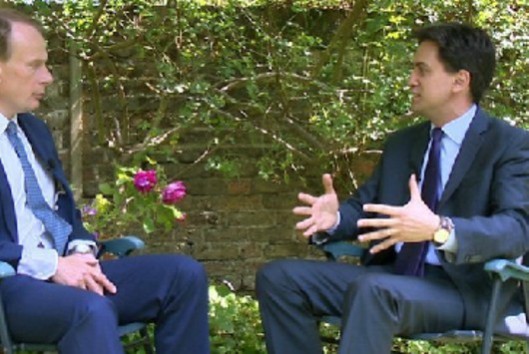 Mile-wide: Mr Miliband explained his idea to bridge the gulf between the public and the Prime Minister to Andrew Marr.

Ed Miliband engaged in a particularly compelling piece of kite-flying today (July 27) – he put out the idea that the public should have their own version of Prime Minister’s Questions.

Speaking to Andrew Marr, he said such an event would “bridge the ‘mile-wide’ gulf between what people want and what they get from Prime Minister’s Questions”, which has been vilified in recent years for uncivilised displays of tribal hostility between political parties and their leaders (David Cameron being the worst offender) and nicknamed ‘Wednesday Shouty Time’.

“I think what we need is a public question time where regularly the prime minister submits himself or herself to questioning from members of the public in the Palace of Westminster on Wednesdays,” said Mr Miliband.

“At the moment there are a few inches of glass that separates the public in the gallery from the House of Commons but there is a gulf a mile wide between the kind of politics people want and what Prime Minister’s Questions offers.”

What would you ask David Cameron?

Would you demand a straight answer to the question that has dogged the Department for Work and Pensions for almost three years, now – “How many people are your ‘welfare reform’ policies responsible for killing?”

Would you ask him why his government, which came into office claiming it would be the most “transparent” administration ever, has progressively denied more and more important information to the public?

Would you ask him whether he thinks it is right for a Prime Minister to knowingly attempt to mislead the public, as he himself has done repeatedly over the privatisation of the National Health Service, the benefit cap, the bedroom tax, food banks, fracking…? The list is as long as you want to make it.

What about his policies on austerity? Would you ask him why his government of millionaires insists on inflicting deprivation on the poor when the only economic policy that has worked involved investment in the system, rather than taking money away?

His government’s part-privatisation of the Royal Mail was a total cack-handed disaster that has cost the nation £1 billion and put our mail in the hands of hedge funds. Would you ask him why he is so doggedly determined to stick to privatisation policies that push up prices and diminish quality of service. Isn’t it time some of these private companies were re-nationalised – the energy firms being prime examples?

Would you want to know why his government has passed so many laws to restrict our freedoms – of speech, of association, of access to justice – and why it intends to pass more, ending the government’s acknowledgement that we have internationally-agreed human rights and restricting us to a ‘Bill of Rights’ dictated by his government, and tying us to restrictive lowest-common-denominator employment conditions laid down according to the Transatlantic Trade and Investment Partnership, a grubby little deal that the EU and USA were trying to sign in secret until the whistle was blown on it?

Would you ask him something else?

Or do you think this is a bad idea?

The current joke has Oliver Twist saying, “Please, sir, can I have some more?” To which Eric Pickles replies: “Clear off! This is MY trough!”

Well? Do you want your kids to starve?

The Guardian has reported that budget cuts are forcing the closure of breakfast clubs in primary schools across the country – despite increased demand. The research, by Labour MP Sharon Hodgson, shows 40 per cent of councils are cutting back.

This means vulnerable children will be going to school hungry and will therefore be unable to concentrate in lessons.

Think about the consequences of this. If they can’t concentrate because of hunger, they’re likely to misbehave – and this could set a precedent for the rest of their lives. Malnourishment leads to misbehaviour, leading to what? Crime, perhaps?

At the very least, the inability to concentrate means their grades will drop and their academic careers will fail – in some cases, before they have had a chance to get going.

Who knows how many will develop health problems associated with malnutrition?

The Guardian reports that Essex County Council said it had 219 breakfast clubs in schools last year, but 169 this year. In Surrey, 2,870 children were being given breakfast last year but only 1,200 in 2012. That’s creating 1,670 potential problem children.

All this is happening in the country with the seventh largest economy in the world.

A Department for Education spokesman acknowledged the importance of the service, but said it was up to schools how they spent the funds they were given. The “pupil premium”, aimed at the most disadvantaged children, would be doubled, the DFE said, but not until 2014-15 – in time to buy your votes at the 2015 election, perhaps?

Until then, do you really want your kids to starve?

The benefits system is failing thousands of people every week, forcing more and more of them to seek help from Britain’s growing number of food banks. “Breadline Britain”, under the Tory-led Coalition, is now a literal expression. Previously it was just metaphorical.

The Trussell Trust, which runs the UK’s biggest food bank, in Coventry, is opening new food banks at the rate of three per week.

Almost half the people who go to food banks are there because of benefit changes. the Department for Work and Pensions does not work fast enough to arrange benefits for when claimants need them, leaving poor people in crisis for weeks, or months, at a time. Then the debts start racking up.

Sanctions, imposed as temporary punishments by the new benefits regime, are also adding to the queue at the food banks. Since 2010, the number of people getting their Jobseeker’s Allowance suspended has spiked, and we all know that the disability tests introduced for Employment and Support Allowance (and soon to come in for Disability Living Allowance) are causing hardship and – in fact – death for Britain’s most vulnerable people.

Sanction or disallowance of benefits happened to 167,000 people in the three months up to February 2012.

What do people do for money when the State fails them and they can’t get work? They fall into the debt trap.

High-interest, doorstep lending to poor people is Britain’s latest – perhaps only – boom industry. In other words, the government’s sick benefits regime is forcing the poor into debt to organisations that will take away everything they have left, in order to make up payments on a loan whose interest rate they probably made up on the spot.

And when they’ve taken everything, what do you do then?

Do you really want your kids to starve?