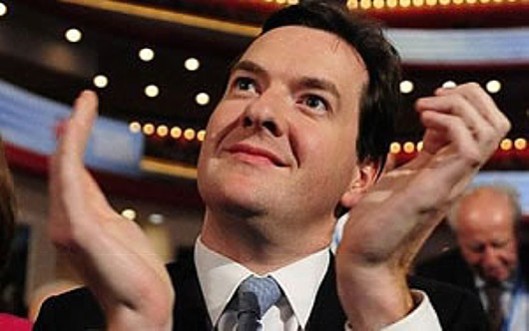 Swivel-eyed loon: This is the kind of man who listens to George Osborne’s comments about the economy. [Picture: Left Foot Forward]

It must be panto season because the Conservative Party’s very own Ugly Sisters have just wheeled themselves out to deliver another helping of hilarious family fun:

Even more cuts are needed, worth billions of pounds, and there are still huge underlying problems with the economy, said Sister George, even though he knows that cuts are not the answer.

The small upturn he managed to engineer last year came from a natural upswing in the economy and the artificial housing boom that he created by Keynesian means and was nothing to do with austerity cuts. As for the economy, he’s had three and a half years to fix it! It seems clear that if there is an underlying problem, its surname is Osborne.

We may also extract some bitter humour from his words. Only days ago, his cabinet colleague Michael Gove attacked TV comedy Blackadder Goes Forth for claiming that our leaders in World War One never learnt from their mistakes but merely repeated them, over and over again, at huge cost in the lives of the working-class people who had to suffer the consequences of their decisions.

So we will see another £25 billion cut out of the British economy after the next election if the Conservatives win, including £12 billion from social security, he told us, providing everybody with an income lower than £50,000 per year with a perfect reason not to vote Conservative in 2015.

Come to think of it, why do working-class people ever vote for clowns like him?

He’ll cut departmental budgets by £13 billion, starving already wafer-thin public services and paving the way for their takeover by the private sector – on the long-disproved premise that profit-making businesses can do a better job for less money.

He’ll cut housing benefit for young people (under-25) who are just trying to get started in work – but he won’t force under-paying firms to boost their wages in order to offer a decent standard of living!

George justified his plan by trotting out the now-classic justification line of this Parliament – that the deficit was down by a third since 2010. He has been saying this for the last two years, and in all that time, the deficit hasn’t dropped at all! Last year the difference was a fraction of one per cent.

This is because the drop was achieved by cutting capital projects and there aren’t any more to cut. Taking billions out of the economy with benefit cuts and investment cuts actually harms the economy – there is less money moving through the system and therefore less opportunity for the fiscal multiplier effect to take place, for profit to be made and for taxes to be taken.

George has always had a bit of a blind spot there.

Sister George said he supported universal benefits for the elderly as they will only save around £10 million – but Sister David has suggested cutting free TV licences, bus passes and winter fuel allowances. Pensions are also taking a battering – never mind what they’re saying about the triple-lock.

David also said he wanted to cut taxes for the poor before the wealthy – but planned to do so by raising the threshold at which they begin to pay tax. This means they will not pay National Insurance either, and will have to find a higher-paying job before they can expect to contribute to their own pension fund. This means some people may never qualify for the state pension.

So they’re starting 2014 by promising austerity cuts that will harm the economy, cuts in benefits for the elderly that will save a comparatively negligible amount but will cause misery, and cuts in government budgets that will open the way to further privatisation and corporatisation of the state.

Those are the real hard truths – but you won’t hear these two characters admitting them.

You can’t trust the mainstream media to debunk politicians’ lies; that’s why you need Vox Political!
But this site needs YOUR support to continue.
Every penny will be used wisely.
You can make a one-off donation here: 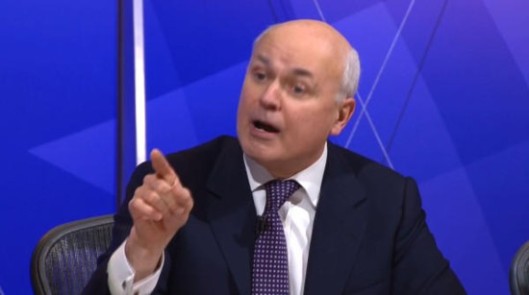 “Getting them off-benefit is what we’re going to do,” yelled Iain Duncan Smith on Question Time last year. But why bother, when they can be so profitable for companies taking part in Mandatory Work Activity schemes?

Sometimes a phrase stands out from everything else that’s said around it, launches itself at your face and forces you to confront the enormity of the lie it encapsulates. You knew this was going to end badly, the moment Iain Duncan Smith (Vox Political’s Monster of the Year, 2012, let’s not forget) opened his face and uttered the words.

He was trying to say that people on Jobseekers’ Allowance (JSA) should not expect to get the benefit without putting something back into society – totally bypassing the fact that they have either already paid towards it, via taxes paid while they were in a previous job, or they will in the future, when they manage to get a job (if such a thing is still achievable in a Tory-led UK).

This was to justify the many ‘Mandatory Work Activity’ schemes onto which jobseekers are currently being put by the thousands, and for which they are being paid only in JSA.

It was only a matter of time before someone identified the flaw in the logic, as Alex Andreou did in the New Statesman when he, rightly, wrote: “Such schemes do not end the “something for nothing culture”. They simply elevate it to the corporate level.”

How many weeks was Cait Reilly supposed to spend stacking shelves at Poundland – was it four? Let’s say four. So assuming 30 hours a week, if she had been employed on the minimum wage, she would have earned £742.80.

Employees of all profit-making companies are taken on because they add to the firm’s profits in some way. Therefore we can assume that, as a result of a person stacking shelves at Poundland, a shopper will come along, see something the stacker has stacked, and buy it – creating a profit for the company.

How many times would this happen during a jobseeker’s four-week tenure on ‘Mandatory Work Activity’? There’s no way of knowing. Let’s apply a conservative estimate based on the standard levels of a fiscal multiplier, at the low end, and say that adds a further 60p to the value of every pound that Ms Reilly would have earned.

Now multiply that by the number of people going through ‘Mandatory Work Activity’ and you’ll see how much these companies are making, courtesy of the taxpayer – because, don’t forget, working people are paying for jobseekers to make money for these firms. We know 878,000 people were put on these schemes between June 2011 and July 2012 – that comes out as 752,571 in a year, on average.

If that isn’t enough to get you hot under the collar, consider this: The profits created for companies by ‘Mandatory Work Activity’ go to company bosses and shareholders, all of whom may be expected to be rich already. They won’t be putting that money back into the economy; they’ll be banking it. Possibly offshore.

If they had employed those jobseekers and paid them at minimum wage, that would have put £559,010,060, per year, back into the economy. These workers would have spent the money in their communities, on commodities that they needed, thus providing a valuable boost to shops and businesses that have been deprived of this support by Coalition government policies.

And the companies concerned would still have made £335,406,030. More than a third of a billion pounds – not to be sniffed at!

It’s mathematical proof of the Conservative Party’s economic incompetence. Making the rich richer and the poor poorer will ruin the country.

*This article does not include payments to Work Placement Provider companies because, not having gone through this system myself, I’m not sure whether it should be applied or not. My understanding is they would get £600 per referral, with higher figures if a jobseeker actually got a job afterwards. Can anyone confirm this is what would happen here?