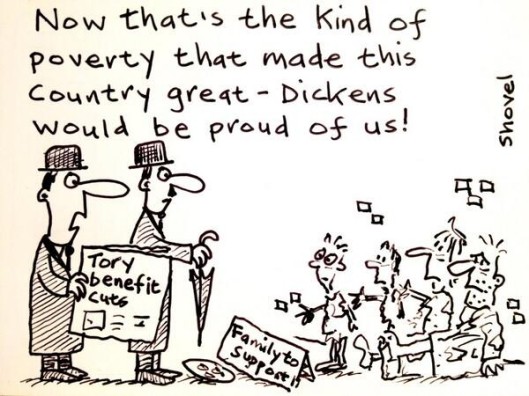 Leading Conservatives must be delighted with the success of their benefit cap in getting single mothers and people with large families out of London – as depicted in the BBC Panorama special, Don’t Cap My Benefits, yesterday evening. (Thursday)

The change means that nobody in the UK is allowed to receive more than £26,000 in benefits per year. The government has claimed this is the same as the average family income, but readers of Vox Political will know that this is a flimsy lie and average family income is in fact more than £5,000 per year higher, at £31K+. The reason benefits weren’t pegged at that level is that far fewer people would be affected by it. Make no mistake – this measure was enacted to shift people from the capital.

The film shows the effects of the change on a number of families in Brent, one of London’s worst-hit boroughs, during a period of just six months. Some of them were forced to move away from their lifelong homes to other cities, with one person being threatened with deportation to Manchester. Even people with jobs were forced to go, by council workers whose attitude bordered on the offensively hostile.

Partway through, Vox Political received this comment: “I am watching Panorama, about the benefit cap. It is heart-breaking, mothers are being split up from small children, a single mother who is volunteering at a children’s centre – a good tenant, according to her landlord – is evicted, she has gone from a house to a B&B and the council woman said, ”At least you’re not on the street”. What hope is there?”

The strongest message the documentary gave was that the benefit cap targets minorities and drives them out of London to areas, most commonly in the Midlands or the North, where people are already suffering similar social deprivation. Perhaps the Tories who dreamed up this idea believe the axiom that ‘Misery loves company’.

Of the families or individuals featured in the film, only one was of British ethnic origin – and she was painted as a troublemaker by her landlord. Some were people who had immigrated into the UK (many years ago – so let’s not have any anti-immigration propaganda levelled at them); some were black. All had children – including some who had many more than the average (there were seven in one family). Some were single mothers. Some were in work, but were told that the amount they were earning could not keep them housed in London and they had to go. Some said they were in work but were doubted by housing officers who forced them out anyway (only to discover later that they were telling the truth, and move them back into Brent, possibly at great expense to the taxpayer).

That’s not what this documentary showed at all.

It showed the intentionally vicious effects of a government policy specifically designed to inflict suffering, in order to remove these unwanted social dregs (as Cabinet ministers no doubt see them) and make London more available as a playground for the rich. It is a policy that goes back (as many do) to Thatcherism.

Thatcherism relied on a massive increase in unemployment, the lowering of wages and the increase of housing prices to undermine the self-confidence of working-class communities – and succeeded on a massive scale. But these were the economics of “planned misery”, in the phrase of Rodolfo Walsh, according to The Impact of Thatcherism on Health and Well-Being in Britain, a new report – strongly recommended.

The article states: “As the relative value of benefits fell, and as wage rates for increasingly insecure and feminised, unskilled work were held down, the poorest were becoming poorer and increasingly ‘socially excluded’, blamed, and stigmatised for policy outcomes that the government had in fact fully anticipated.”

It continues: “All of this generated – and was designed to generate – sharply increased inequalities of income and wealth across Britain and a dramatic increase in poverty… Thatcher’s governments wilfully engineered an economic catastrophe across large parts of Britain and sowed the seeds… of a subsequent collapse – which ironically has provided the highly spurious legitimation for a new generation of ‘uber-Thatcherites’ in the current Conservative-Liberal Democrat coalition government to go where Thatcher herself had hesitated to tread – a complete dismantling of the welfare state.”

In other words, this government’s answer to poverty is to remove the safety net – and that is what we saw in the Panorama film.

The answer to the problems it depicted isn’t to ship poor people off to the deprived North! The answer is a cap on rents, so they don’t become so high that people can’t pay them. It’s a living wage, to ensure that working people don’t need to claim state benefits – as someone else recently said, how can any industry consider itself ‘private’ if its employees need funding from the state to survive?

Otherwise, as a commenter on the BBC’s Question Time said, a little later in the evening, there will be nobody left in London to provide services such as education, for all the rich kids the Tories and Tory Democrats are no doubt already inviting in.

Vox Political exposes the prejudice in government policy
… but we need YOUR help to do so.
This independent blog’s only funding comes from readers’ contributions.
Without YOUR help, we cannot keep going.
You can make a one-off donation here: