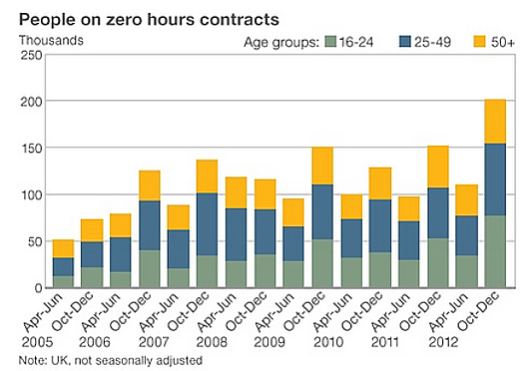 The rise of zero-hours contracts: These figures from the Office for National Statistics may be showing only one-fifth of the picture, according to new research.

The rise of the zero-hours contract must be deeply disturbing to all those with an interest in fair employment practices.

The arrangement is that an employee agrees to be available for work whenever required, but with no set number of hours or times of work specified. The employee is expected to be on-call at all times but is paid only for the number of hours that are actually worked.

There appears to be no pension scheme, no sickness cover, no holiday entitlement – no rights other than those laid down by health and safety regulations (which the government is trying to ditch) and the National Minimum Wage Act (also under threat from the Conservative-led government).

Also, the system is open to abuse by managers, who can use it to reward some employees (and the term is used in its loosest possible sense) with extra hours or punish others with fewer.

And how, exactly, is an employee supposed to be engaged in, and enthusiastic about, a job where they are treated as a disposable commodity, to be picked up and thrown away whenever it is expedient?

It seems possible that there is an argument in favour of zero-hours contracts – but only for employees who want to top-up another income stream; people who want occasional earnings and are flexible about when they work. The problem here is that it seems likely employers will want these people to work at times when it will be hard to meet the commitment.

For anyone else – including people who are unemployed, penniless, and need the certainty of a properly-constituted employment contract with set hours, pay and conditions, there seems to be no point in taking up such a contract at all. Yet they are proliferating across the UK.

Is the Department of Work and Pensions, through the Job Centre Plus network, forcing these conditions on jobseekers?

Such a situation might be a huge boost to employment figures, but it would also explain why average pay has fallen so drastically in recent years and the economy has failed – so abjectly – to reignite.

Today (Monday) it is being reported that more than a million UK workers are on zero-hours contracts – four times official estimates.

The BBC is reporting that 14 per cent of these could not earn a basic standard of living. If Job Centres are forcing people into these jobs, via the sanctions regime, this is scandalous. Perhaps it is permitted by law, but this would only mean that the government should have a duty to ensure that jobs which are taken under the threat of sanction are capable of providing this basic standard.

Worse still for the government is the allegation, in research by the Chartered Institute of Personnel and Development, that public sector firms – those with government contracts – are more likely to use zero-hours contracts than private companies.

This is particularly prevalent in education and healthcare.

And how is the benefits system affected by these contracts?

CIPD chief executive Peter Cheese told the BBC: “Zero-hours contracts cannot be used simply to avoid an employer’s responsibilities to its employees.” But isn’t that exactly how they are being used? Don’t the number of people saying they can’t make ends meet, and the wider state of the economy, indicate exactly that?

Unison general secretary Dave Prentis seems to have got it right when he said: “The vast majority of workers are only on these contracts because they have no choice. They may give flexibility to a few, but the balance of power favours the employers and makes it hard for workers to complain.

Business secretary Vince Cable has ordered a review of the zero-hours contracts system, to take place over the summer. He played down fears of abuse, saying evidence was “anecdotal” and adding that “it’s important our workforce remains flexible” (in employment terms, this means all the power is with the employer, while the actual worker has to adapt to the circumstances foisted upon them).

Shadow Health Secretary Andy Burnham called for zero-hours contracts to be banned, back in April this year.

It seems clear that they are unsafe and open to abuse. But would an all-out ban be appropriate?

Would it not be wiser for Job Centres to continue advertising them, but with no obligation to recommend them to jobseekers (and certainly no requirement to force anyone into applying for them), and with a requirement to warn anyone considering taking up such a position about the possibility that they will not be able to survive on the pay provided?

This might go some way to redressing the balance of power with employers; without the coercive power of the government supporting these contracts, they might try more traditional (and fairer) employment models.

This is a subject worth more examination. What are your thoughts? 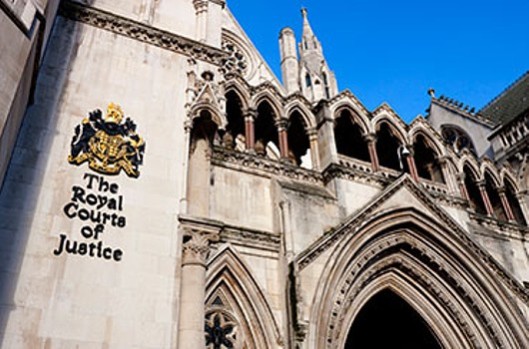 Chequebook justice: Your unelected government wants to ensure that nobody can challenge its policies and decisions – by putting justice within the reach of only the wealthy.

David Cameron and Chris Grayling have been messing with the justice system again. This time, according to The Telegraph, they are planning to make it “tougher” for judicial reviews to be brought to court, to stop the process being “abused” by pressure groups and campaigners.

There’s a lot of Telegraph-speak in that first paragraph, as the Tory-supporting newspaper was working desperately to make governmental perversion of justice acceptable. What this actually means is that Cameron wants to make it impossible for organisations that are capable of mounting legal opposition to unreasonable Conservative/Coalition policies ever to do so.

The only people able to seek judicial reviews of government policy would be individuals who are directly affected – and the government is hoping that these mostly poor people would be unable to afford the cost, thanks to changes in Legal Aid that mean it could not be claimed for welfare or employment cases.

You see how this works? With those changes to Legal Aid and the possibility of wholesale privatisation of the entire court system, where justice was once open to everyone, it will soon be a privilege available only to the wealthiest in the UK.

To Cameron, and his crony Grayling, justice isn’t for you. In fact, it won’t be for anyone. The UK will be about money and power, just as Michael Meacher stated in his recent blog article.

So, for example: The ‘Poundland’ case, which The Guardian reported was to be heard in the Supreme Court yesterday (Monday). The original judicial review was launched in the names of Cait Reilly and Jamieson Wilson, who were both directly affected – but were both unemployed and penniless, and therefore could not afford to take the case to court on their own. Their case was brought with the aid of Public Interest Lawyers – who would most likely be barred from taking part, being considered a pressure group with no direct interest in the matter.

The original case resulted in the government taking the unusual – and highly suspect (in legal terms) – step of passing an emergency retroactive law to legalise its employment schemes, after the tribunal ruled that all of the Coalition’s schemes were acting illegally and opened the government up to a potential £130 million worth of claims for wrongfully-withheld benefits.

PIL has now started a second judicial review – on the retrospective law – claiming it undermines its clients’ right to justice and violates article 6 of the European Convention on Human Rights. Under the new procedures this, too, would be inadmissible.

On the same lines, the judicial review that ruled (in May) that the test used to decide whether people are fit for work actively discriminates against the mentally ill, brought by the Black Triangle Campaign with the charities MIND and Rethink Mental Illness, would also be inadmissible.

So we have examples in which it is clearly in the interests of justice for new laws to be challenged – but which would be blocked outright under Cameron and Grayling’s plan.

According to The Telegraph, “Ministers plan to change the test for applying for a review so that only people with a direct link to policies or decision can challenge it, rather than anyone with a ‘sufficient interest.’

“The concerns echo those of the Prime Minister who previously said the judicial review process was slowing the country’s economic growth as well.”

In fairness, the paper adds: “There are fears that changing the judicial review process could lead to government decisions going unchecked, and charities have also raised concerns about not being able to use the process to challenge decisions and ensure the government is meeting its obligations.”

Meanwhile, Unison has been given leave to launch a judicial review of the introduction of fees for workers seeking employment tribunals.

The BBC reported that people wanting to bring tribunals must now pay a fee for the first time since they were created in the 1960s. It will cost £160 to lodge a claim for matters such as unpaid invoices, with a further charge of £230 if it goes ahead.

More serious claims, such as for unfair dismissal, would cost £250 to lodge, and a further £950 if the case goes ahead.

The plan here is clearly to make it impossible for an unfairly-sacked worker to take a firm to judicial review; how many poorly-paid working class people (and remember, wages have fallen by nine per cent since the credit crunch) have twelve hundred quid knocking around in their back pockets?

“The introduction of punitive fees for taking a claim to an employment tribunal would give the green light to unscrupulous employers to ride roughshod over already basic workers’ rights,” Unison general secretary Dave Prentis told the BBC.

“We believe that these fees are unfair and should be dropped.”

The judicial review will take place in October. Considering Lord Judge’s recent change of heart over privatisation of the courts, it’s a safe bet that by then the government will have ‘persuaded’ any judges hearing the case to support the new charges.

As Mr Meacher wrote: David Cameron’s instincts are “that there is no such thing as the rule of law, and that the only things that ultimately matter are power, fear and money”.