Dave Hartnett, the former tax executive responsible for the hugely controversial “sweetheart deals” that allowed multinational corporations including Vodafone and Starbucks to avoid paying billions of pounds in taxes to the UK treasury, has started work with Deloitte, the accountancy firm and auditor of – guess who? – Vodafone and Starbucks.

Hartnett quit as Permanent Secretary for Tax at HM Revenue and Customs and then took on the one-day-a-week role (according to, among others, The Independent). Deloitte – one of the so-called ‘Big Four’ accountancy firms at the heart of every major scheme for tax avoidance – continues in its role at the UK Treasury, helping (if you can call it that) to write the law on – guess what? – tax avoidance.

Considering all of the above, does anybody seriously expect us to believe that Hartnett was working for the public when he was at HMRC? 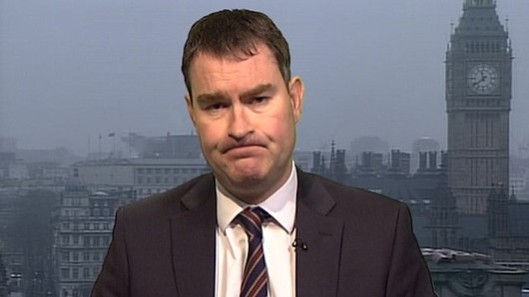 Rumbled: David Gauke, the ugly face of Treasury-approved tax avoidance. This man is one reason the poor are being made to pay so heavily for the foolishness of the very rich.

You know something is wrong in the Treasury when the minister in charge of tax is revealed to have worked for a firm specialising in tax avoidance.

The wrongdoing goes off the scale when it is revealed that the same minister has been actively trying to gag a whistleblower who uncovered a “sweetheart” deal to write off a huge amount of tax owed to the UK by a private company.

That is precisely what we have learned today, thanks to The Guardian.

It seems that David Gauke, the exchequer secretary to the Treasury, green-lit a plan to discredit testimony from Osita Mba, a solicitor with HM Revenue and Customs, after he took the notorious Goldman Sachs “sweetheart” deal to the public.

For those who don’t know about this, the deal with Goldman Sachs was worth up to £20 million, and was part of a series of four such settlements, with large companies, that netted £4.5 billion for the Treasury. That might seem like a lot of money.

But it begs the question, asked by Margaret Hodge MP, who chairs Parliament’s public accounts committee: How much did we not get?

One person who might know the answer is Mr Mba, who told two parliamentary committees that the then-head of tax, Dave Hartnett, had agreed a deal allowing Goldman Sachs, a US bank, to escape £20 million in interest charges, payable to the UK. He claimed Mr Hartnett had done this without following proper procedures.

Disciplinary proceedings were launched against Mr Mba within HMRC, meaning he was suspended from work, and an emailed exchange between an HMRC press officer and Gauke’s private secretary strongly suggest that the minister wanted to discredit the whistleblower with a media smear campaign.

The National Audit Office was asked to investigate the Goldman Sachs case, along with four others, and although Judge Andrew Parks’ report was not publicly released, the head of the NAO, Amyas Morse, told MPs that the deals had been cleared. Morse’s role was later questioned after a leaked document showed that he had told Hartnett the inquiry would find “nothing of substance” – before it began.

And it was revealed last Thursday – again by The Guardian, which appears to be living up to its name – that the deal with Goldman Sachs had been arranged partly to save our part-time Chancellor of the Exchequer, 0sborne, from embarrassment.

It seems that the dispute with Goldman Sachs was settled hastily after the bank threatened to pull out of a new tax framework, a week after 0sborne had announced that the bank had signed up to it.

The revelation was made at the High Court last Wednesday, where UK Uncut was calling for a judgement to declare that the 2010 settlement between the bank and HMRC was unlawful. The court heard that Hartnett had personally overruled legal advice, the HMRC’s own guidelines and its internal review board over the issue (confirming Mr Mba’s claim).

So it was a cover-up, in order to allow a company to escape paying the UK a huge amount of money, with the blessing of ministers including 0sborne and Gauke.

In Gauke’s case, of course, this is unsurprising. It has long been known – as can be seen by this entry on the right-wing Guido Fawkes blog – that the minister has not only avoided paying tax himself but also worked for Macfarlanes, a top city law firm that specialises in helping the wealthy avoid paying tax.

The Enterprise and Regulatory Reform Bill, which has been passing through Parliament recently, includes a section intended to introduce greater protection for individuals from harassment when they blow the whistle at work.

In the light of the treatment of Mr Mba, by members of the government that has introduced this bill, it remains to be seen whether this measure was ever intended to succeed.