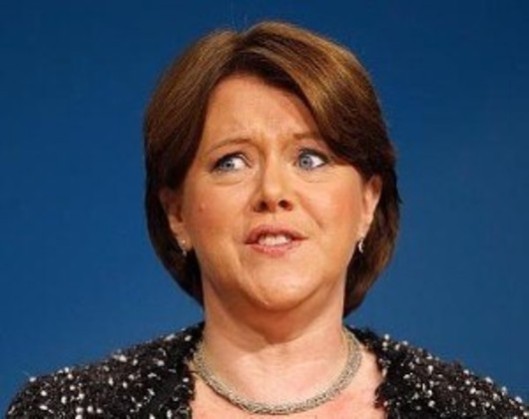 “Oh, f…”: Now Maria Miller’s Cabinet colleagues are stabbing her in the back. By accident?

The Ministry of Justice has just announced that £14 million, taken from criminals’ ill-gotten gains, will be used to help their victims.

How much of this will come from the fraudster Maria Miller?

What an awkward, mistimed moment – another in a series for which this Conservative-led administration should be justly famous.

Here we all are, stridently discussing the future of a Cabinet minister (Miller) who clearly defrauded the taxpayer out of tens of thousands of pounds to pay for mortgage interest on a house she then sold for more than £1 million profit – and her Cabinet colleague Chris Grayling decides now is the time to announce what the government is doing with other criminals’ ill-gotten gains.

This will merely intensify calls for Miller to face trial and conviction, and for her financial assets to be seized.

The MoJ press release states: “Under this government more money than ever before is being raised from offenders specifically to help victims of crime.” This is except for when the offender is a member of the government, apparently.

“An increase in the penalties judges can impose on criminals from 2012 is ensuring criminals are forced to pay the price for their wrongdoing.” Except when they are investigated by Parliament, rather than the police.

Miller remains a member of the Cabinet, her criminally-won gains sitting in her bank account. She is unrepentant, as her “obstructive” attitude to the Parliamentary investigation and her 30-second apology to Parliament – for that obstruction, and not for any criminality – clearly demonstrates.

David Cameron, the weakest Prime Minister in living memory – if not all time – does not have the backbone to sack her.

Maybe there is another reason for this.

We were all reminded by the Scriptonite blog yesterday that there is another crook in the Cabinet who likes doing dodgy property deals.

George Osborne “‘flipped’ his first and second homes to claim over £100k of taxpayer money for interest payments on a mortgage for his £455k Cheshire pad. He later sold the home for over £1m having made improvements partly funded by taxes. He also claimed taxpayer money to cover payments on a horse paddock for the property,” Scriptonite reminds us.

In fact, he claimed taxpayer money for several pieces of land in addition to the house, and sold the lot for a profit that was estimated to be £1 million, because he never paid a penny of his own towards the purchase – it all came from the taxpayer.

Vox Political called for Osborne to face criminal proceedings more than a year ago but the Independent Parliamentary Standards Authority (IPSA) closed ranks around him and the Commissioner said that, as this had already been investigated under the lax pre-2009 rules, Osborne was going to get away with it.

So the message today is that you don’t have to be a master criminal to get away with illegal activities – you just have to be a member of the government.

Is that really what the Conservatives want to say – before an election?

Vox Political opposes the corruption that allows ministers to commit crimes
… but we need YOUR help to do so.
This independent blog’s only funding comes from readers’ contributions.
Without YOUR help, we cannot keep going.
You can make a one-off donation here:

Unfit to wear the helmet: How deep does corruption run within our police? Do most officers still uphold the law without prejudice? Or do they use the uniform to pursue their own personal vendettas against innocent members of the public?

When did you lose faith in the British police?

Was it after Plebgate, the subject of a considerable controversy that has resurfaced this week? Was it after Hillsborough? Do you have a personal bad experience with officers whose interpretation of their duty could best be described as “twisted”, if not totally bent?

The Independent Police Complaints Commission says that the row involving whether former Conservative Chief Whip Andrew Mitchell used offensive language against a policeman who stopped him from riding a bicycle through the gates of Downing Street should have led to disciplinary action for the officer involved, along with others who supported his story.

IPCC deputy chairwoman Deborah Glass questioned the “honesty and integrity” of the officers involved and said that West Mercia Police, who investigated the affair, were wrong to say there was no case of misconduct for them to answer.

Now, there is plenty of evidence that this police complaints commission is anything but independent, and that it provides verdicts as required by its superiors – either within the force or politically. But the weight of the evidence that we have seen so far suggests that, in this instance, the conclusion is correct.

The Plebgate affair began less than a month after serious failings were identified in the police handling of the Hillsborough disaster in 1989. It was revealed – after a 23-year wait – that serious mistakes had been made in the policing of the infamous FA Cup semi-final between Liverpool and Nottingham Forest, during which events took place that killed 96 people and injured a further 766.

In addition, post-mortem reports on the deceased were falsified and the police tried to blame Liverpool fans for the disaster.

These were both events that received national news coverage – but what about the local incidents that take place all around the country?

Sir Hugh Orde, chairman of the Association of Chief Police Officers said, “130,000 police officers are delivering a good service” – but are they really?

This blog has already mentioned the experiences of several people here in Mid Wales who have had unsatisfactory experiences with the police, including victims of serious physical, psychological and sexual abuse who were told to go back and suffer more of this personal hell by policemen and women who either couldn’t care less or were complicit in the crimes. Years later, attempts to get justice fell on the equally deaf ears of officers who didn’t want to know.

And this week the front paper of my local newspaper (the one I used to edit) carried the headline ‘Hello, hello, what’s going on here then?’ over a story about two local police officers who, while on duty, seemed more interested in having sex than upholding the law.

One was an inspector; the other a (married) constable. The inspector, prior to her promotion, had been instrumental in sending a friend of mine to prison on a particularly unsavoury child sex charge. There was no concrete evidence and the case hinged on the opinion of a doctor that was hotly disputed by other expert testimony. But my friend’s path had crossed this policewoman’s before and she had failed to gain a conviction on the previous occasion. It seems clear that she had not forgotten him.

I have always believed that the jury convicted my friend because its members were worried that he might be guilty – despite the lack of evidence – simply because he had been accused. “There’s no smoke without fire,” as the saying goes. It seems likely now that this conviction reflects the policewoman’s preoccupations with sex, rather than any criminal activity on the part of my friend.

It also seems to be proof of the fear raised by Andrew Neil on the BBC’s This Week – that police have been sending innocent people to jail and letting the guilty go free.

My friend is still inside, by the way. He has maintained his innocence throughout the affair but, having been released on parole and then dragged back to jail for a breach that was more the fault of the authorities for failing to give adequate warning against it, he is now determined to serve his full sentence rather than face the heartbreak of having his freedom stolen with another excuse.

Who can blame him?