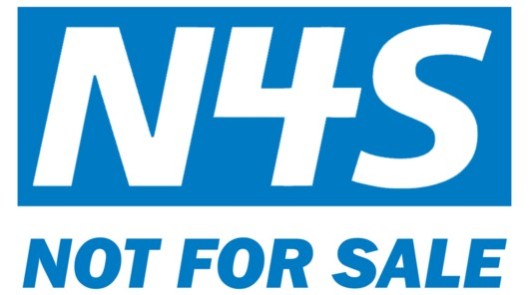 It seems the government has found a way to dissuade GPs from letting patients opt out of having their medical records sold to private firms – the threat of penalties or even an investigation into the way they run their practice.

Vox Political revealed earlier this month that the government is planning to make a profit from selling the private records of NHS patients in England to healthcare and pharmaceutical firms.

The records are said to be ‘anonymised’, but in fact anyone buying your details will be able to identify you.

The system, originally called the General Patient Extraction Service (GPES), now the Health and Social Care Information Centre, may also be described as the care.data scheme. Health Secretary Jeremy Hunt wants you to think the information will be used for medical research and screening for common diseases, but in fact it could be used by private health companies as evidence of failures by the National Health Service, and could help them undercut NHS bids to continue running those services – accelerating the privatisation that nobody wanted.

Patients have the right to withhold their data, but they must specifically inform their medical practice of their wishes. This is why medConfidential created a web page containing a special opt-out form, along with a form letter in various formats, allowing patients to opt out themselves, their children and any adults for whom they are responsible.

Now GPs are living in fear of reprisals if they don’t deliver enough details to the new system.

According to GPonline.com, Health minister Dr Daniel Poulter failed to rule out penalising GP practices with a higher-than-average proportion of patients opting out of new NHS data sharing arrangements.

In a written answer to Labour MP and health select committee member Rosie Cooper, Dr Poulter also refused to say what level of patient opt-out from the scheme would trigger an investigation.

Asked whether practices would be penalised, who would investigate practices with a high opt-out rate, and at what threshold this would apply, Mr Poulter said: “NHS England and the Health and Social Care Information Centre will work with the BMA, the RCGP, the Information Commissioner’s Office and with the Care Quality Commission to review and work with GP practices that have a high proportion of objections on a case-by-case basis.”

Ms Cooper took this as an admission that GPs were “being threatened and bullied into ensuring patients don’t choose to opt-out”.

Reacting on Twitter, NHS national director for patients and information Tim Kelsey ruled out fines for practices where large numbers of patients opt not to share data. He wrote: “Nobody is going to get fined if patients opt out.”

None of this offers a good reason for you to leave your medical records unprotected – in fact, it gives you more reasons to opt out than before, and might provide GPs with the excuse they need to retaliate.

Doctors have been pushed further and further by the Conservative-led government’s changes to the NHS. For example, they were told they would have a greater say in where the money went, as members of Clinical Commissioning Groups (CCGs), but that was not true – they don’t have the time to take part in such decisions so they have been handed over to firms that are often part of the private companies now offering services to the NHS (for a price).

Now they are being told they may face reprisals if they do not betray the principle of doctor-patient confidentiality.

But you can only push a person a certain distance before they push back.

How will NHS doctors in England respond?

Vox Political supports the National Health Service.
The site needs funds if it is to carry on doing so.
That’s why Vox Political needs YOUR help to continue.
You can make a one-off donation here:

Virgin trains will continue to run on the West Coat Main Line until the government sorts out the £40 million mess it has made of the franchise bidding process.

This morning we heard that the controversial decision to award the contract to run the West Coast Main Line to FirstGroup has gone south – by which I mean the franchise award was scrapped by the government after it found “significant technical flaws”.

Three civil servants have been suspended – typical of David Cameron’s government to sack the help.

Bids were made by four companies – Virgin, FirstGroup, Dutch train operator Nederlandse Spoorwegen, and a joint bid from French companies Keolis and SNCF. The flaws were found in the way the level of risk in the bids was evaluated.

This appears to be a problem across the Coalition government’s departments. Does anyone remember Andrew Lansley’s refusal to release to risk assessment on his changes to the NHS, which predicted severe problems with the delivery of healthcare?

The August announcement that FirstGroup would take over services on the West Coast Main Line, starting in December, sparked a legal challenge from current operator Virgin, which has run the franchise since 1997. The Department of Transport said it will no longer be contesting the judicial review launched by Virgin in the High Court, and Virgin will continue to operate the line while the issue is resolved.

I’m not fantastically enthusiastic about this because it seems like a squabble between rich boys over their toys. Let’s bear in mind that Virgin is having great fun peeling bloody strips from England’s NHS and claiming them for itself.

Most damning of all is the fact that the four companies must be reimbursed for the cost of their bids, taking £40 million from the public purse at a time of fiscal austerity. The government has wasted our money. Will the welfare budget take yet another hit to help George Osborne balance the books?

There is a bright side. The flawed franchise was awarded when Justine Greening was Transport Secretary. She was replaced last month by Patrick McLaughlin. I made fun of him at the time because he has a fear of flying, but at least he has the decency to admit when a mistake has been made.

What a shame his leaders can’t admit the same about their entire administration.