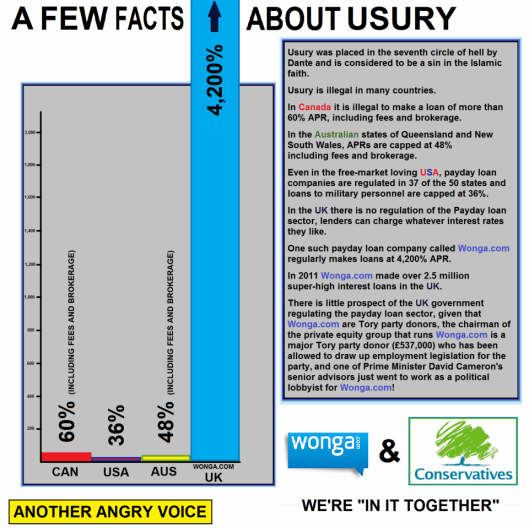 This is a piece I wrote for the local credit union in my part of Powys, following on from the Archbishop of Canterbury’s vow that the Church of England would fight payday lenders. Quite right – usury is an evil that religious organisations traditionally oppose. I’m publishing it here because the main information is relevant nationwide (and also because today appears to be quite slow for political news).

Credit unions must rise to the challenge created by the Archbishop of Canterbury’s stand against payday lenders, according to a leading figure in a Mid Wales organisation.

Richard Bramhall of Red Kite Credit Union said the main issue facing credit unions was how to bring affordable credit to “people on the edge”.

Last month, the Most Reverend Justin Welby announced that he planned to help community-based credit unions by allowing them to use Church of England premises as bases, to put firms like Wonga.com, which charge huge amounts of interest for their loans, out of business.

“Instant credit is a difficult sector to service because of high rates of defaulting. Payday lenders, door-step lenders and loan sharks – and to a lesser extent banks and credit card companies – answer the threat of bad debt by charging monstrous interest rates.

The Credit Union approach is responsible lending, careful interviews, getting guarantors where possible and working with the member to develop financial competence.

“The ethos always was to save; build a relationship with the credit union through saving – becoming a shareholder – and borrowing using the shareholding as security. They pay low interest and benefit by keeping and growing their shares.

“We do not want to lend at high rates,” he said. “Our standard rate is 12.68 per cent, or one per cent per month. If you borrowed £100 over a year and paid it back without interruptions, it would cost you £6.60 in interest, with no extra charges and no penalty for early repayment.”

But he warned: “The population density here is so low and the conceivable number of members so small that, even if everyone joined, our income from loan interest would not be enough to pay for bank-type premises or employees.”

The Credit Union’s solution is what Mr Bramhall calls ‘barefoot banking’. He said “The Herb Garden Café, in Llandrindod Wells, is an example. You can access credit union services six days a week, 12 hours a day – not just when we’re open but any time we’re in the building. People can pick up leaflets, ask about the credit union, leave messages, make payments and collect cheques. It costs the café nothing.

“If people want to help, they could develop the sort of access point we have here. Our greatest need is for self-motivating volunteers and casual drop-in service points in shops, churches, cafes and even private homes all over Radnorshire and north Brecknock.”

He added that credit unions also needed to establish themselves in schools, teaching responsible money management to youngsters.