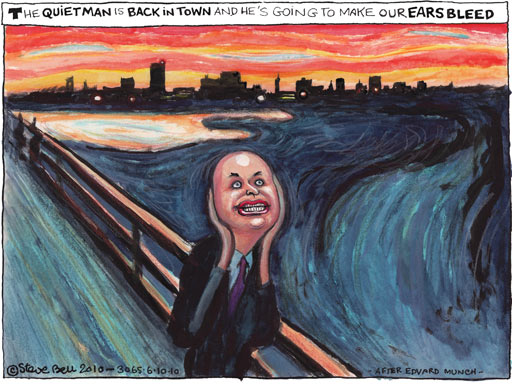 It seems redundant to start an article by saying Iain Duncan Smith is a filthy liar, because it is a fact that we all know too well already.

The latest offence – and the word is used very deliberately – took place during Work and Pensions Questions in Parliament yesterday (October 14) and means that he has lied to Parliament – not for the first time, either!

It is interesting that he phrased his words in a particular way. Responding to Andy Sawford’s call for clarity on whether, under the new claimant commitment, benefits officers will sanction jobseekers for refusing zero-hours work, he said this referred to “people’s obligations under the existing terms… Once they are offered a job they must take it… Right now, zero-hours contracts are legal.”

You will note, Dear Reader, that he did not simply say, “Under the claimant commitment, they must take zero-hours work or be sanctioned,” even though that is clearly the meaning of his words. It seems likely he was looking for leeway if questioned about it afterwards.

Well, he shouldn’t get any. A reasonable person, looking at the statement, will draw the obvious – intended – conclusion.

It is a conclusion – and a statement – that runs against current DWP policy.

The DWP responded to a Freedom of Information request in July this year, which also called for clarity on zero-hours contracts. The response contains the very clear statement: “Jobseeker’s Allowance claimants are not required to apply for zero hours contract vacancies and they will not face sanctions for turning down the offer of a zero hours contract.”

So Iain Duncan Smith was lying to Parliament yesterday – a very grave offence for a Secretary of State to commit.

Smith said, responding to Mr Sawford: “People will lose benefits for three months for a first offence, six months for a second offence and three years for a third offence.” When it comes to Parliamentary lies, he has committed multiple offences, and yet he gets away with it every time.

Another person who seems to have had trouble saying what they mean is Rachel Reeves. This blog – and many other people – took her to task last weekend, after The Observer published an interview in which she reportedly made many ill-advised comments, giving the impression that Labour policy on social security was lurching to the right yet again.

Yesterday a statement appeared on the Labour Party website in which the new Shadow Work and Pensions Secretary put forward a much more reasonable plan for social security reform under a Labour government. Particularly attractive are the parts where she says Labour will work with the disabled to design services and benefits that will help them play their part, and where she promises to repeal the Bedroom Tax, which has penalised vulnerable people, many of them disabled.

It is a much better statement of intent and indicates that Ms Reeves has been from one end to the other of a very steep learning curve with extreme rapidity.

Does it mean she was misquoted in the Observer article, and should she receive an apology from those of us who leapt down her throat? No.

There has been no suggestion that the article was inaccurate or unfair. The logical conclusion is that she said those words, and it is also logical to deduce that, had we not reacted so strongly, she might not have released the new statement.

It is unfortunate that, for many, the damage has been done. The Observer article was the first chance we had to see what the new Shadow Work and Pensions Secretary was thinking – and first impressions last. Her new statement seems like to go largely unreported. It should be noted that Tristram Hunt also made a fool of himself by supporting Michael Gove’s wasteful and elitist ‘Free Schools’ scheme. Hopefully Ed Miliband has accepted the need to make sure all of his Shadow Cabinet stay on-message from now until the next election. Reeves and Hunt should count themselves lucky to still have their new jobs.

But let’s not dwell on that. The new statement by Rachel Reeves has much to commend it, and is reproduced in full below. Your responses are invited.

Leading the debate on employment, poverty and social security.

Families facing a cost of living crisis want to know we have a social security system that is fair and sustainable, with costs kept under control but there for them when they need it.

The Tories seek to use every opportunity to divide this country and set one group of people against another. But their approach is failing – with the result that people are left out of work for year after year and costs to the country continue to rise. The Work Programme isn’t working, the roll-out of Universal Credit is in disarray, the Youth Contract has been a flop and there is mounting anger at the degrading and disgraceful treatment of disabled people by ATOS.

The complacent Tories are congratulating themselves about a long-delayed recovery. But almost a million young people are out of work. For those in work, increasing numbers of them aren’t being paid a living wage, are stuck on zero hours contracts or working part time when they want to work full time, and are being hit by soaring rents because levels of house building are so low – all of which drive up the benefits bill.

Labour will control the costs of social security by getting more people into work, rewarding work and tackling low pay, investing in the future, and recognising contribution. We’ll strive to make the right to work a reality for people with disabilities, working with them to design services and benefits that enable them to play their part.

A One Nation social security system will be one with responsibility at its heart – people receiving benefits who can work have a responsibility to look for work, prepare for work and take jobs that are available to them, but government has a responsibility to treat benefit recipients fairly and decently, help and support them and work with employers to ensure there are real job opportunities available.

And unlike the Tories, we’ll put an effective cap on structural social security spending by getting tough on the causes of unemployment and rising benefit bills: low pay, lack of economic opportunity, shortage of affordable housing.

We would repeal cruel and counterproductive measures like David Cameron’s Bedroom Tax. I see constituents week in and week out with heart-breaking stories about how this policy is hitting them and their families. Around the country hundreds of thousands of vulnerable people, many of them disabled, are being penalised by this perverse policy which could end up costing more than it saves because of the distress and disruption it’s causing.

And we’ll keep up the campaign for the living wage, and for the economic reforms we need to ensure that prosperity is fairly shared and welfare is not a substitute for good employment and decent jobs.

It seems police confiscated an effigy of the Blue Baroness after protesters set fire to it in Glasgow. It is doubtful that the scene looked anything like the above image. Without an effigy to burn, the protesters did NOT become violent. No – they did a conga, while chanting, “Maggie Maggie Maggie, dead dead dead”.

Why on earth does Boris Johnson think it’s necessary to put the fear of violence into our heads, just because people are coming to London to demonstrate in favour of common sense?

The London Mayor said hundreds of Metropolitan police officers would be “kitted up” and ready to be deployed rapidly, in case of outbreaks of disorder.

The trouble with that, of course, is that he has made everybody involved – protesters and police – paranoid that unpleasantness of some kind will happen, and that it will be the other side that starts it!

How utterly ridiculous. By all means, keep your political tools (the police) ready, Boris, but keep them in the background. Otherwise, you’re the one inciting trouble.

If only he was able to step back and look at the situation dispassionately. Consider what the protests are about:

The main event is a demonstration against the current lionisation of Margaret Thatcher that has already cost the taxpayer nearly £2 million in expenses payments for MPs who were recalled to Parliament during their Easter recess for no good reason, when tributes could have been paid to the Blue Baroness upon MPs’ scheduled return, on Monday. Add to that a further £10 million for a state-funded funeral with military honours that a huge proportion of the population believes is undeserved – especially when the late champion of privatisation had more than enough cash in her estate to pay for as much pomp and ceremony as she could ever have wanted – and anyone can see there is a valid justification for the event.

Attendees will include former miners, and members of mining communities that were devastated by the Thatcher government’s decision to force a confrontation with the unions – the real reason the pits were closed in the mid-1980s. They will be joined by travellers – whose kind were attacked by police, in their role as a political tool of the Thatcher government rather than as guardians of lawful behaviour, most notably in the ‘Battle of the Beanfield’. Students whose grants were transformed into loans during her period of office will also be represented, along with those who are politically opposed to her policies and their legacy.

History tells us that violence involving those groups has always been instigated by those arrayed against them – the forces of the government; remember, the BBC was forced into a (grudging) apology after it was proved that footage of a police charge had been doctored to make it seem the miners had attacked first, when in fact the police provoked the unpleasantness.

So let’s hope that nothing of the kind happens today – either at the main event, the UKUncut demo against the Bedroom Tax and benefit cap, or the Taxpayers Against Poverty march.

But if it does, let’s all take a good hard look at whoever kicks it off – particularly their voting history. I have a sneaking suspicion that anyone causing trouble today will have a prediliction for supporting the Conservative Party.