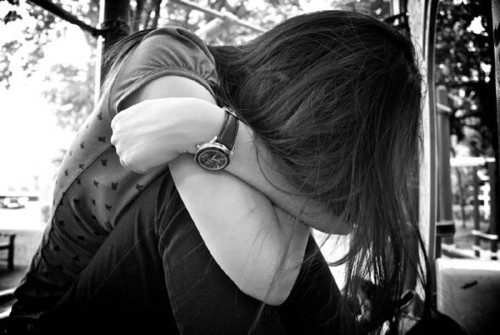 If you’re thinking, “She doesn’t LOOK disabled,” you’re a fool. Many disabled people don’t LOOK disabled. They hide the pain and try to live lives that are as normal as possible. If you’ve looked at someone with a disabled badge, or who you know claims benefit for a disability, and decided they didn’t deserve it because they don’t LOOK disabled, you need to tell yourself, it’s time to grow up. (In fact, I chose the picture because it represents despair. I have no idea whether the person in it has disabilities or not. But the point deserved to be made).

As I type this, the petition calling on the government to “stop and review the cuts to benefits and services which are falling disproportionately on disabled people, their carers and families”, informally known as “Pat’s Petition”, which requires 100,000 signatures to secure a debate in Parliament, has gained just a few more than 60,000.

With less than half a day left (deadline is 10.12am on November 1) it seems likely that it’s not going to make it.

I think those who have signed deserve a vote of thanks. If you are one of those people, then you stood up for what you believed in, and can count yourself one of an extremely select group comprising 0.1 per cent of the UK’s population. Well done. I sincerely wish there were more of you.

The trouble is, I sincerely think there are more of you. The message just didn’t get across – partly because it was choked off by a mass media that has been howling for the blood of the sick and disabled since the government first started suggesting it was going to cut their money.

We’ve all seen the articles about “those filthy benefit scroungers” in the tabloid press, and seen some of them get caught on certain television programmes, and yes – there are a few people like that. But they are a tiny minority and it is monstrous that the actions of 0.4 per cent of claimants – that’s right, less than one per cent – are being used to justify the victimisation of 87 per cent of disabled people – seven-eighths of the total number of claimants. Doesn’t that seem disproportionate to you?

This is the percentage of those who, after going through a so-called ‘work capability assessment’ that we know through – again – TV documentaries is rigged, either lose their benefits completely or are told they will lose them after a period of one year, in which they must find a way to recover from (in some cases) progressively degenerative conditions.

So, if you decided you wouldn’t sign the petition because you think everyone claiming disability benefit is a fraud, then you’re a fool. You’ve let yourself be spoonfed tripe because you were told it’s caviar. I bet you’ve got a bad taste in your mouth right now. You deserve to.

If you want to what is really happening, to people with serious conditions that simply will not get better – no matter how much an ESA assessor or Job Centre Plus desk-jockey says they should – read this.

After that, if you can bear it, you might like to find out what has happened to at least one disabled person who had the audacity to protest against the way she, and fellow people with disabilities, have been treated – by reading this.

But there you go. Protestors cannot rely on the mass media because television stations, newspapers and radio channels are almost exclusively owned by people with a vested interest in keeping the plight of these victims of prejudice well and truly out of the public gaze. Go to sleep, they say. Do what we tell you. You are free… as long as you do what we tell you.

And you suck it on down and swallow it whole, don’t you?

The people behind the petition had to find other ways to promote it – virally, by word of mouth (or by passage from one internet user to their friends) – but clearly the act of lifting a few fingers to put a name to the petition was too much effort for many. That’s all you had to do. Lift your fingers. Hit a keyboard a few times. You didn’t even have to get up out of your chair.

There was an effort to get celebrities to endorse the petition. I’ve tried a few – only those with more than a million followers because I knew the kind of numbers that count and the simple fact is that most people were never likely to sign the petition. But if only one in 10 did, then a person with a million followers would have delivered up enough to get the petition to the next stage. You can probably work out who some of these people are.

That didn’t happen. Maybe they never saw the messages asking for their support – it’s entirely likely, as a person with that many people sending messages to them and only a limited amount of time to respond can’t possibly see everything that they receive. Maybe they were advised against it, for the sake of their careers. Maybe they were as gullible as everyone else who was taken in by the mass media manipulation of the truth. They’re not necessarily bad people just because they did nothing.

Look at this: Thanks to a Freedom of Information request – to the government – we know that an average of 73 people a week are dying because their disability benefits have been removed by the government. In your name.

Think about that. Another 73 – on average – will die next week. In your name. Because you did nothing.

Alternatively – prove me wrong. There are still 12 hours left, as I type this. Get your name on the petition. Get your friends to sign it – stand over them until they do, because there really isn’t any time for “I’ll do it later” nonsense. Broadcast to as many people as you can that it needs help and use whatever arguments you need – including the one I just employed about the next death being your fault – to twist their arm and bring them to sign it.

There’s still time to do some good.

… Unless YOU make a conscious decision not to.