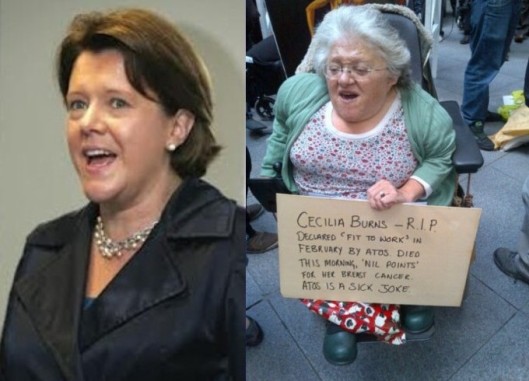 Minister for the disabled Maria Miller (left) is unlikely to be losing sleep over the death of cancer patient Cecilia Burns when she could be promoted for her efforts to persecute those she is supposed to represent.

The minister for disabled people, Maria Miller, may be in line for promotion in David Cameron’s cabinet reshuffle, according to the BBC.

This individual, under the guidance of DWP boss Iain Duncan Smith, has presided over the closure of dozens of Remploy factories, forcing thousands of disabled workers onto the dole.

Her colleague at the DWP, Chris Grayling, is also in line for promotion after being responsible for the Work Capability Assessment regime run by the infamous Atos organisation, which has caused the deaths of 32 people per week, on average, since the beginning of last year.

(The figures show that, between January and August last year, 1,100 claimants died after they were put in the “work-related activity group”. A further 1,600 people died before their assessment had been completed, and 5,300 seriously disabled people died after being put into the support group – the group for people who are found to be genuine in their need for continued support. The number who died after being judged “fit for work” was not recorded because the DWP does not keep records of those who have been written off its books.)

The latest person to lose her life was cancer patient Cecilia Burns, who was judged ‘fit for work’ by Atos in February this year. Her benefits were restored just a few weeks ago but the ordeal was clearly too much for a person in a weakened state due to fighting a potentially terminal illness, and she passed away last week.

Atos is still claiming that it does not make decisions on people’s benefit entitlement – it merely carries out the assessments and refers the results to the DWP. We know from TV documentaries Dispatches and Panorama that the findings of the assessments are rubber-stamped by the civil servants in the vast majority of cases.

The firm also claims that its service is “highly professional and compassionate” and that it adheres strictly to the rules. What it doesn’t say is that the government changed the rules – and the benefit – in order to make it easier to cut claimants off. Even after that, 40 per cent of those who appeal win their case at tribunal. If they have legal representation, that figure rises to 90 per cent.

I understand that our Paralympians have been safeguarded from assessment so far – but will all face Work Capability Assessments of their own next year. Like our armed forces, it seems the Coalition government is happy to use them for good publicity in the public eye; once that gaze has moved elsewhere, they’ll be shunted onto the scrap pile.

The reshuffle – and possible promotion for Ms Miller and Mr Grayling – follows a week of protests by the Atos Victims Group, focusing on the Paralympic Games. This culminated in demonstrations outside Atos’ London headquarters and the offices of the DWP on Friday, in which it has been claimed the police physically attacked those present, breaking one protester’s shoulder and damaging a wheelchair user’s chair.

This is what the Coalition government wants to do with the disabled, it seems – push them out of the way, cut off their benefits, forget about them, let them die.

This is extremely pertinent at the moment. Why? Because it is 73 years since the government of a certain European country put its own policy for disabled people into action. Adolf Hitler signed an order to begin the systematic euthanasia of Germany’s mentally ill and disabled people on September 1, 1939.

According to the Nazi policy of racial hygiene, people with physical and mental disabilities were “useless” in German society, and they were a threat to Aryan purity. They were deemed unworthy to live. The euthanasia programme (‘Operation T4’) cost the lives of around 270,000 people.

The best figures we have suggest that the new British assault on the disabled has killed nearly 5,000 so far (rising to almost 10,000 if you include those in the support group). But the Chancellor wants to cut a further £10 billion from the welfare budget (rather than get his rich pals to pay their taxes) so who knows how high this figure may rise before we get a chance to restore sanity in 2015?

I’m already having nightmares about it.