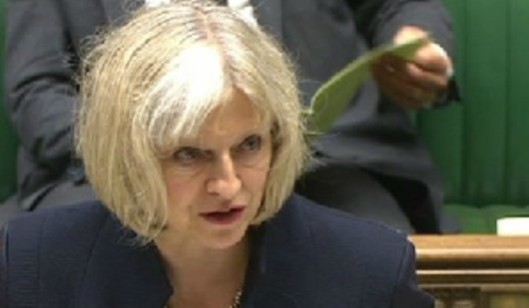 Haggard: Theresa May looked distinctly ruffled as she responded to criticism of her government’s undemocratic actions. Some of you may wish to abbreviate the first word in this caption to three letters.

It is ironically appropriate that an Act of Parliament guaranteeing government the right to invade the private communications of every single citizen in the UK, ostensibly in the interests of justice, should be justified by a web of dishonesty.

This is what an indecisive British electorate gets: A government that can lose every major debate in the chamber – and look shambolic while doing so – and still win the vote because all its members have been whipped into place.

We all knew the government’s case for providing itself with a legal ability to snoop on your telephone and Internet communications was paper-thin, and by failing to produce any new justification, the government confirmed our suspicions.

Introducing the Data Retention and Investigatory Bill earlier today, Minister for Security and Immigration James Brokenshire said the three-month delay since the European Court of Justice judgement that allegedly necessitated the legislation was because the Coalition had “sought clarity” on it.

He went on to say that “There is a risk in relation to co-operation on the use of the powers; indeed, there may be legal challenge. The House must face up to the prospect that the powers we use—they are constantly used by our law enforcement agencies—are at potential risk, and we are seeking to address that risk.”

Michael Meacher suggested a more persuasive reason for the three-month delay: “Panic or a deliberate attempt to blackmail the House into undiscriminating compliance.”

He said the argument that foreign phone and Internet firms were about to refuse UK warrants, demanding the contents of individual communications, was another red herring: “It has been reported that communications service providers have said that they did not know of any companies that had warned the UK Government that they would start deleting data in the light of legal uncertainty. Indeed, the Home Office, according to the Financial Times, instructed companies to disregard the ECJ ruling and to carry on harvesting data while it put together a new legal framework.”

So Brokenshire was lying to the House about the potential effect of inaction. That will be no surprise to anyone familiar with the workings of the Coalition government. At risk of boring you, dear reader, you will recall that the Health and Social Care Act was based on a tissue of lies; now your privacy has been compromised – perhaps irrevocably – on the basis of a lie.

MPs could not limit the extension of the government’s powers until the autumn, Brokenshire said, because a review of the power to intercept communications had been commissioned and would not be ready by then.

According to Labour’s David Hanson, the main Opposition party supported the Bill because “investigations into online child sex abuse, major investigations into terrorism and into organised crime, the prevention of young people from travelling to Syria and many issues relating to attempted terrorist activity have depended on and will continue to depend on the type of access that we need through the Bill”.

Mr Hanson’s colleague David Winnick disagreed. “I consider this to be an outright abuse of Parliamentary procedure… Even if one is in favour of what the Home Secretary intends to do, to do it in this manner—to pass all the stages in one day—surely makes a farce of our responsibilities as Members of Parliament.”

He pointed out – rightly – that there has been no pre-legislative scrutiny by the select committees – a matter that could have been carried out while the government sought the clarification it said delayed the Bill. “This is the sort of issue that the Home Affairs Committee and other Select Committees that consider human rights should look at in detail,” said Mr Winnick. “None of that has been done.”

The Bill did not even have the support of all Conservative MPs. David Davis – a very senior backbencher – said: “Parliament has three roles: to scrutinise legislation, to prevent unintended consequences and to defend the freedom and liberty of our constituents. The motion undermines all three and we should oppose it.”

Labour’s Tom Watson, who broke the news last Thursday that the Coalition intended to rush through this invasive Bill, was more scathing still: “Parliament has been insulted by the cavalier way in which a secret deal has been used to ensure that elected representatives are curtailed in their ability to consider, scrutinise, debate and amend the Bill. It is democratic banditry, resonant of a rogue state. The people who put this shady deal together should be ashamed.”

Labour’s Diane Abbott made two important points. Firstly, she called the Bill an insult to the intelligence of the House. “We have had a Session with a light legislative programme, and for Ministers to come to the House and say, ‘We’ve only got a day to debate it’, when weeks have passed when we could have given it ample time is, I repeat, an insult to the intelligence of MPs.”

Then she turned on her own front bench: “I believe… that those on the Opposition Front Bench have been ‘rolled’ [one must presume she meant this in the sense of being drunken, sleeping or otherwise helpless people who were robbed]. All Ministers had to do was to raise in front of them the spectre of being an irresponsible Opposition, and that children will die if they do not vote for the Bill on this timetable, and they succumbed.”

Despite this opposition – not just to the way the Bill had been tabled, but to its timetable and its content – MPs voted it through, after a derisory nine hours of debate, by a majority of 416.

So much for democracy.

So much for MPs being elected to protect their constituents.

When Hansard publishes details of the vote, I’ll put them up here so that you can see which way your own MP voted and use that information to inform your actions during the general election next May.

10 thoughts on “Data retention debate: The lies they tell to steal your rights”