Ed Miliband himself provides a few more of these ‘reasons’, in an interview with the Huffington Post: “First of all, they said I was ‘Red Ed’. Then they said I was weak. Then they said it’s back to the 1970s. They’re desperate to find a point of criticism. I genuinely believe one of the reasons we are in a position to win the next election is because actually, in the end, the British public do judge people on their ideas and what they stand for and what difference they’ll make to the country.”
The article goes on to describe him as ‘Steady Eddie’.

I’m not particularly trying to fly the Ed Miliband flag here, but is it only me thinks the Labour leader’s opponents are getting a bit desperate? 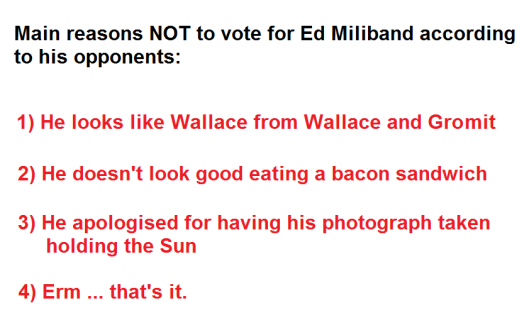 And with just 10 months to go before the next election, all the smears against the Labour leader in the right-wing press have had no effect on Labour’s polling – which has been consistently ahead of the Tories for years now.

Mind you – it’s always mystified me why looking like Wallace from Wallace and Gromit is supposed to be such a bad thing.

After all, who would you rather vote for – Wallace or Flashman?

4 thoughts on “Party politics aside, anyone else think Ed Miliband’s critics are getting a bit desperate?”