Mock sympathy: This is the sort of treatment Ed Miliband can expect from David Cameron if he keeps following policies that are created by the Tory media rather than the needs of the British people.

Labour could be heading for defeat next year, after it set out new policies that have the same chance of success as England’s plan for the 2014 World Cup.

The party put its weight behind a report by the Institute of Public Policy Research (IPPR) that left the public cold. If Labour does not change direction, it seems likely the party will not win the votes it needs to get into office next year – unless its rivals make serious mistakes.

It is a situation almost exactly like that of the England football team.

All right, it’s not a perfect parallel. England got into this fix because it was outplayed by teams with ambitious and flamboyant star players – Balotelli for Italy and Suarez for Uruguay. Labour doesn’t have that problem as the closest equivalent in politics is Nigel Farage.

But, like England, Labour seems unable to defend itself against even rudimentary attacks – partly because leaders have painted themselves into a corner (marked ‘pro-austerity’) and partly because they simply refuse to use the logical arguments. Does anybody remember what a relief it was when, after years of silence in response to Tory claims that Labour caused the financial collapse, Peter Hain finally told Owen Paterson, on the BBC’s Any Questions, “It was the banks that destroyed the economy, not the Labour government – it was the international banking system!”

And where is Mr Hain now? He’s retiring at the next election. The only Labour player who was man enough to fend off this blatantly unreasonable Tory attack and he’s being taken off the field.

Meanwhile, Labour’s leaders continue to make schoolboy mistakes that create the opportunity for the other side to score. Ed Miliband’s publicity-seeking pose with The Sun was a spectacular example; yesterday’s IPPR report was a more subtle one.

The lack of ambition is staggering; it seems that, after four years, the Miliband camp still hasn’t understood that copying Tory austerity will scare voters away. Committing to Tory-imposed constraints that require any new idea to be covered by a cut or a tax increase will just increase the exodus – Labour needs to be ambitious.

Everybody knows now that austerity is nonsense. It’s an excuse to drive money into the hands of those who have too much of it already. After four years of it, we are told that this government is on course to put five million British children in poverty by 2020. Food bank use is at its highest ever. The number of people claiming in-work benefits is at its highest ever because employers refuse to pay a living wage and expect the taxpayer to subsidise them instead; by the time of the 2015 election, working families will be around £2,000 per year worse off than they were in 2010.

Meanwhile, business bosses and shareholders have been having a spectacularly good time, with incomes skyrocketing. There’s no austerity for the One Per Cent!

Indeed, income inequality has increased hugely to place the UK seventh on the international table, behind the USA (fourth) and Chile (first) – and we all know that Tory neoliberals are huge fans of the systems in those two countries. 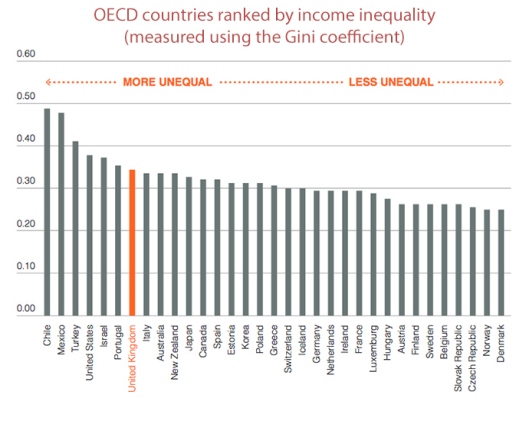 What are the wealthy doing with all the money they have parasitised from the rest of us?

Well, they’re not using it to pay their taxes, that’s for sure!

One of the main plans put forward in Labour’s IPPR report was to save money by means-testing benefits for 100,000 young people – saving £65 million. That’s a pittance compared to the £600 million in taxes that is being withheld by Google, Amazon and Apple, according to an infographic that’s currently doing the rounds. 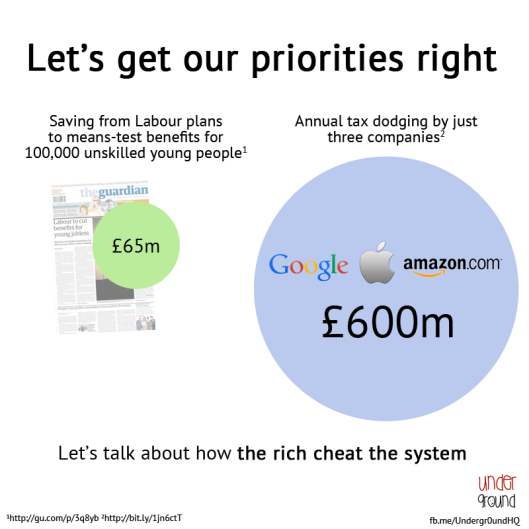 Labour is very quiet about that – copying the Tory attitude of diverting people with stories about welfare abuses because Miliband’s know-nothing advisors think being “hard on benefits” is popular with the public, who don’t like “scroungers”.

They’re not intelligent enough to understand that this attitude has been carefully nurtured in the public consciousness by a right-wing, Tory-controlled media. It has nothing to do with reality, in which only a tiny minority of people are in fact defrauding the taxpayer out of benefit money. Lord Fraud – sorry, Freud – was taken to task for this only days ago.

It seems that – like England’s football team – the Labour Party has been off chasing a fantasy. Austerity and the persecution of people on benefits (most of whom are entirely deserving of them, plus massive amounts of compensation for the despicable way they have been treated for the past few years) are Conservative-created blind alleys. In politics, you don’t oppose anybody by copying them.

If Labour concentrated on the real causes of Britain’s problems, the party might have a hope of success.

Otherwise, like the England team, Labour will have to be content with hoping that the Tories make a big mistake.

And, like the England team, they are most likely to learn that this is not good enough.