Am I reading this right – that the DWP has been ‘April fooled’ and actually has no budget for Universal Credit at the moment? 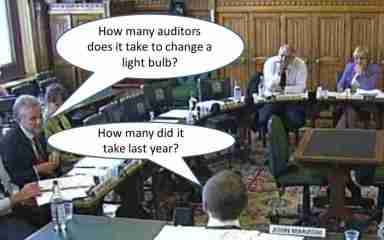 Today the Head of the Major Projects Authority (MPA), a unit in the Cabinet Office, gave evidence to Margaret Hodge MP and the powerful Public Accounts Committee.

He revealed that the ‘reset’ Universal Credit Project budget is still unagreed, confirming my observation 2 weeks ago that DWP have not yet secured the agreement of HM Treasury to proceed with the project at the scale needed to meet the declared 2017 deadline for 15 million people in 9 million households to be paid under the new scheme.

MPs on the Work and Pensions Committee were promised that the ‘reset’ business case would be approved by Treasury ‘mid-April’.  DWP was so sure of this that the promise was quoted in the MPs report published on the 2nd April:

Today the Head of the Major Project Authority (MPA), John Manzoni, in the last two…

3 thoughts on “Head of MPA to MPs “I am not actually sure that DWP has set out Universal Credit budget at the moment”.”