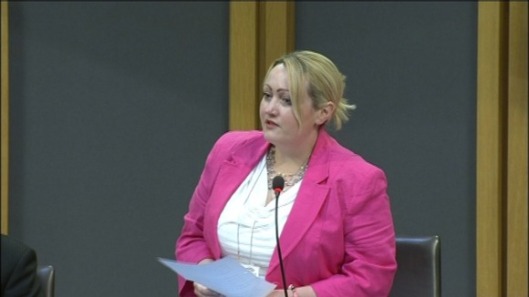 The day job: Rebecca Evans AM in the more familiar environment of the Assembly debating chamber [Image: ITV].

I wanted to share this with you because, as a constituent and a member of the Labour Party, I’m quite proud of Mid and West Wales Labour AM Rebecca Evans, who spent a week living on an amount equivalent to Jobseekers’ Allowance and discussing ‘welfare reform’ with people who deal with its effects on a day-to-day basis, to find out what it is like.

She wrote an article about her experience for Wales Online which I am taking the liberty of excerpting here. Over to you, Rebecca:

With the average household in Wales expected to lose 4.1 per cent of their income due to policy changes, support is vital for those living on the poverty line.

Although people are understandably cynical when politicians attempt to live life on the breadline, I wanted to raise awareness of the challenges facing welfare claimants and gain a better understanding of how well understood the changes are.

Living off £72.40 for one week, I did not expect to truly experience the day-to-day life of people who rely on welfare support. I was aware that when Monday came around I would step back into my normal routine. But I wanted to experience at least some of the challenges and difficult decisions facing many thousands of people every day.

The Your Benefits are Changing money advice team calculated that the average weekly expenditure for someone living off Jobseeker’s Allowance in my home area of Carmarthenshire leaves just £13.58 for food and essentials once transport costs, utilities, the TV licence, phone bills and the bedroom tax have been paid – which equates to less than £2 a day.

On this income, any trip to the supermarket becomes a stressful task as every single penny matters.

When speaking with job seekers, food bank volunteers, YBAC money advisors and housing association staff and tenants during the week, the message was the same: people are struggling and many have had their lives irrevocably damaged by welfare policies.

The Bedroom Tax has had a serious impact on thousands of people across Wales, and the shortage of suitable housing has only enhanced poverty levels. Brought in as part of the Welfare Reform Act… the policy is estimated to have affected 36,000 tenants in the social housing sector, including 3,500 disabled households. As a direct result… housing association tenants accrued £1.1 million in arrears during the first six months.

Housing associations are rightly concerned that a move to monthly payments will prove incredibly challenging for those on low incomes, leading to an increase in the number of people that turn to emergency food supplies.

A YBAC money advisor told me food poverty levels can be worse for people who live on housing estates because they may only have one shop within walking distance, and that shop may have limited discounts. Food prices have risen by 12 per cent since 2007, so it is no surprise 900,000 people across the UK have turned to food banks in the past year… but the fact that we need food banks in 21st never ceases to be shocking.

The families I met during my week on benefits rely on second hand clothes and goods, and rarely buy anything new – let alone any kind of treats. They try to put aside £20 a week, but unexpected emergencies leave them unable to save.

A YBAC money advisor told me that around a quarter of people seeking advice are actually in work, and that the majority of children in poverty live in a household where one adult works. One mum with a young baby told me that her husband is on a zero-hour contract, meaning that the family can’t plan financially with any certainty.

This smashes the myth that welfare reform is all about supporting the unemployed back to work.