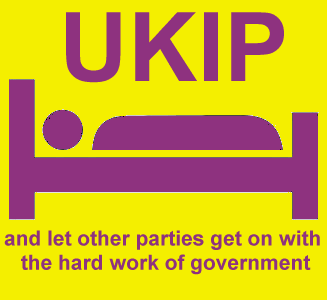 Yesterday’s article (UKIP: They don’t like it up ’em) delved into the facts behind a controversial meme that has been doing the rounds on the social media.

The image claims to be publicising UKIP policies, and seven out of the 10 policies claimed for the party have been verified, as demonstrated in the VP article.

Vox Political has been doing a little digging into the others.

The claim that UKIP wants to cancel all planned house-building on Green Belt land appears to have been based on the party’s 2010 general election and 2013 local election manifestos, which are no longer available to the public. Party members have stated many times, recently, that Nigel Farage has rubbished the 2010 document and its contents are not to be taken as UKIP policy. The party’s attitude to its manifesto from last year is less clear.

The relevant line, as quoted in this Property Newshound blog, is: “by controlling immigration, large areas of British countryside will not need to be destroyed by house building.” The rest of the article is well worth reading too.

UKIP’s South Buckinghamshire website discusses plans to build on the Green Belt, with a reply to a summary document by the Conservative Party:

“Conservatives say: ‘So we need to find places to build more homes…’ (page 2)

The strange thing is that preventing development of Green Belt land should not be a controversial issue, yet I have just – as I have been writing this blog – received a comment from a UKIP supporter stating: “Every bullet point [on the meme] is a fiction, written by a Green Party activist.”

Where does that leave UKIP policy? Does the party now want to build on Green Belt land, because the Green Party (apparently) opposes it?

Personally, I’m against that. My former home in Bristol was on the edge of the city, next to Green Belt land which became threatened by the South Western regional assembly (whatever it was called). Residents had a terrible time fighting off the proposed development, which seemed to be motivated solely by a desire to build a new road to Bristol Airport, enabling faster journeys from it to the city and back.

Building on the Green Belt – of any kind other than what is absolutely necessary for agricultural purposes – should be banned, in the opinion of this writer. It is land that has been set aside in the national interest, and proposals to develop it should be seen for what they are – money-grubbing by disinterested corporates who live in mansions on estates that will never be disturbed by such environmentally-damaging raids.

The claim that UKIP wants to cancel bank regulations “to make banks safer” was a commitment on the party’s policy website, according to this article in The Yorker (which is simply the first I found in a Google search). The Yorker is a student-run media site, based at the University of York, which claims no political affiliations at all.

It states: “According to their policy website UKIP… wants [to] further de-regulate the city… Indeed their primary reasons for leaving the EU relate to the need to cut such rights and regulations in the name of The City and big business.”

This would appear to be corroborated by Nigel Farage himself, who wrote in an Independent article in January this year: “And let’s look closer to home for where the fault lies with the banking crisis. I know it might still be trendy to “bash the bankers” but this crash was entirely predictable. It was Gordon Brown handing over regulation of the banking industry from the Bank of England who, since 1694 has done a pretty good job, and handed it over to the tick-box bureaucrats in Canary Wharf.”

It seems the case for UKIP wanting bank deregulation is also proven.

Unlike the Green Belt issue, bank deregulation would be a huge mistake for the UK. Farage is wrong in his claim that Gordon Brown was at fault for re-introducing regulation to the banking sector; it is the fact that he didn’t introduce enough regulation that let us down. The banks all told him that they were perfectly capable of policing themselves, and he took them at face value. Meanwhile the Conservatives, who have been blaming Labour for being too loose with regulation ever since they got back into office, despite doing nothing about the issue themselves, were calling for even less regulation at the time of the banking crash.

The UK requires more banking regulation, not less. Less regulation would encourage further abuses of the banking system and would inevitably lead to another disaster. This time the consequences could be appalling, for millions of low-paid British citizens. Farage does not clarify why he wants to court this.