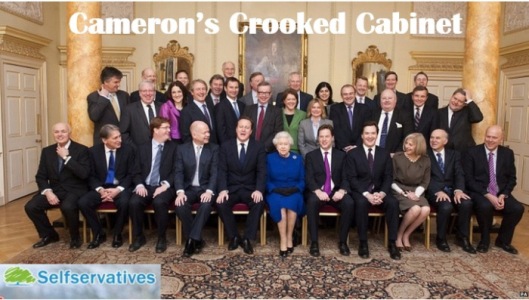 As Maria Miller is rightly hounded out of office and hopefully into the courts for her egregious abuse of privilege, many are pointing out that she is but one rotten cog in a thoroughly rotten machine. So if we want real change – the prosecution of Maria Miller is where we start, not where we stop.

Maria Miller is Culture Secretary and Equalities Minister for the UK government.  Between 2005 and 2009 she claimed £46,000  in fraudulent expenses on the mortgage on a family home that she later sold for £1.2m – and used her position to bully a commissioner in efforts to keep the whole thing quiet.  Her punishment? Giving back £5,000 and a 32 second apology in the House of Commons.

Despite abusing the expenses system for four long years, only ending her scam when the MP Expenses Scandal broke in 2009, and her evasion of the ombudsman reviewing her expenses ever since – she has been backed by Prime Minister David Cameron and cabinet colleagues.  Cameron says of her:

“Maria Miller is in her job and she is doing a good job as culture secretary.

“Also, she went through this process and the committee found that she had made a mistake in her mortgage claims. She paid back money. She made an apology and that’s the right thing to do.”

Were it not for the relentless pressure of the news media and public campaigns – that would have been the end of the matter for Maria Miller.  She cheated, she tried to cover it up, and she kept her job and her profits. For Maria Miller, crime paid.

In contrast, when 22 year old Sacha Hall helped herself to several bags of waste food left out by Tesco after its refrigerators failed – she was immediately arrested, charged with handling stolen goods, and taken to court and given a 12 month conditional discharge. Tesco even admitted there was no value to the food as it was heading to the landfill.

There is truly one rule for them, and one for everyone else.

But Miller is unlikely to be held to account by her cabinet colleagues when we have one of the most corrupt cabinets in UK history.

(For details of the other bent members of Cameron’s Cabinet, see the original article on Scriptonite Daily.)

Vox Political supports the best writing in other blogs
… but we need YOUR help to do so.
This independent blog’s only funding comes from readers’ contributions.
Without YOUR help, we cannot keep going.
You can make a one-off donation here:

14 thoughts on “Maria Miller: Another Rotten Apple in Cameron’s Cabinet of Crooks”