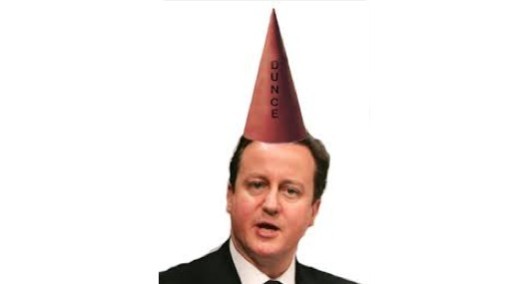 For someone who was educated at Eton and Oxford, it seems strange that David Cameron never learns his lesson.

Today in Prime Minister’s Questions he got on the wrong side of an argument on the Coalition government’s botched sale of the Royal Mail and committed every MP’s cardinal offence: He knowingly lied to Parliament.

Ed Miliband had caught him out with a question about share prices, pointing out that Royal Mail shares had been sold far too cheaply. Referring to Cameron, he described the Prime Minister as “not so much the ‘Wolf of Wall Street’, more the ‘Dunce of Downing Street’.

Cameron hotly denied that his government had bungled the sale, and in response to Miliband’s claim that nobody had wanted it, he told Parliament that Labour had planned to do the same. “It’s in their manifesto!” he ejaculated.

I have a copy of Labour’s 2010 manifesto on my computer, so I was able to check it immediately and found no mention of any such sell-off. Cameron was inaccurate.

Not only that, but unless the memory cheats, this is not the first time Cameron has made such a claim. His advisors would certainly have informed him of any inaccuracies, so any repetition is a conscious decision. Cameron was lying.

This blog has covered the offence known as Contempt of Parliament in considerable detail before (mostly in relation to serial offender Iain Duncan Smith). By rights, anybody misleading Parliament who does not apologise and put the record straight should be expelled from the House. The current government seems to be ignoring this (for obvious reasons).

Labour’s Jon Ashworth raised a point of order after PMQs, demanding that Cameron return to the Commons to correct himself. Fat chance.

A spokesperson insisted that the language in the Labour manifesto was “similar” to a 2009 plan by Lord Mandelson to sell off 30 per cent of the Royal Mail and prepare the remainder for modernisation.

This means nothing. If it isn’t in the manifesto, Cameron can’t claim that it is.

But then, Cameron seems very confused about manifesto pledges. He once claimed that Andrew Lansley’s reorganisation of the NHS in England had been a part of the Conservative Party’s 2010 manifesto, for example – despite having himself ordered that nobody should mention it in the run-up to that year’s election, in case it put voters off supporting the Tories.

I leave you with Martin Rowson’s cartoon on the Royal Mail sale, for Tribune magazine. 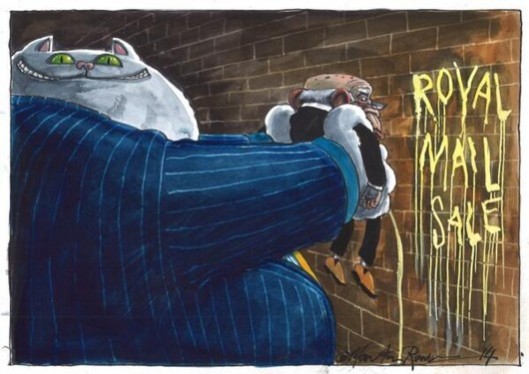 Vox Political exposes the lies at the heart of our rotten Tory-led government
… but we cannot do so without YOUR help.
This independent blog’s only funding comes from readers’ contributions.
Without YOUR help, we cannot keep going.
You can make a one-off donation here: