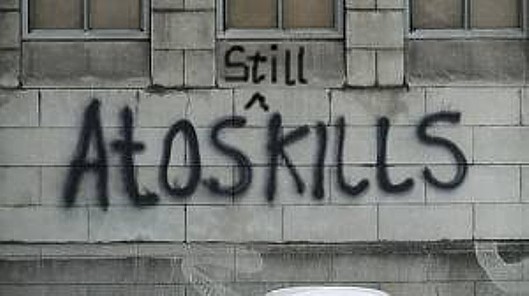 ‘Have 230,000 sick and disabled people been wrongly knocked off-benefit and forgotten?’ That was the question posed on this blog just two days ago, based on an analysis of statistics from the ONS and CESI. Without more input from the Department for Work and Pensions it is impossible to answer the question – but two former claimants have come forward with stories that support the allegation.

He explained: “When I was on Incapacity Benefit it was indefinitely – then came ESA.”

Mr Dix was put on contribution-based ESA totalling £97 per week – but this only lasts for a year. After that, “I was told that my wife, who is on minimum wage at Asda, earns too much for me to get income-related ESA.

“We were told we could only apply for Working Tax Credits, but guess what? Because I got ESA in the tax year 2013/14 we don’t get anything until tax year 2014/15 when we will have to apply again, and we can’t have anything backdated until then!

“We married on September 3, 2013; we did not qualify for housing benefit between then and December 25, 2013 and so now have £400 rent arrears to make up, and I have to find another £68 for overpayment of housing benefit (the bedroom tax) to pay back for that period too!”

Mr Dix stated that he had been made to feel like a criminal. “My crimes? I’m disabled and got married!

“The government keep on about how they’re helping working taxpayers and how they are helping married couples like my wife and I, but I really am wondering how much worse things would be if we weren’t getting David Cameron’s ‘help’!

“Now of course I have no independant income, I’m unable to work, and only have £168 DLA at the lower rate per month, half of which goes to Wonga.com!”

So this victim clearly deserves sickness benefit because he is unable to work, but has been denied it because of the arbitrary 365-day limit on contribution-based ESA; his low-paid wife can’t claim Working Tax Credits because of a legal loophole and so they have had to take money from a payday loan firm – the one that famously contributes to Conservative Party funds.

How convenient for Wonga.com and the Tories. How devastating for Mr Dix and his wife.

On Facebook, a person going by the moniker Nomine Deus tells us: “I was kicked off-benefit (long term Incapacity) in 2012.

“I am not eligable for Jobseekers [Allowance] or Income Support as my wife works and is paid just over the qualifying amount for one and works too many hours for the other. I live out in the sticks and would be forced to travel to sign on at my own expense and then put onto workfare etc, again at my own expense (or rather my wifes expense). I am forced, therefore, not to sign on at all.

“We are already in fuel poverty and struggling financially. I am still suffering my original condition. I believe there must be many like myself out there.”

These are only two stories of people who have fallen through the holes Iain Duncan Smith has created in what used to be the safety net of social security.

Who can doubt that there are many, many more?

Vox Political does not get benefits!
The site needs YOUR help to continue.
You can make a one-off donation here: