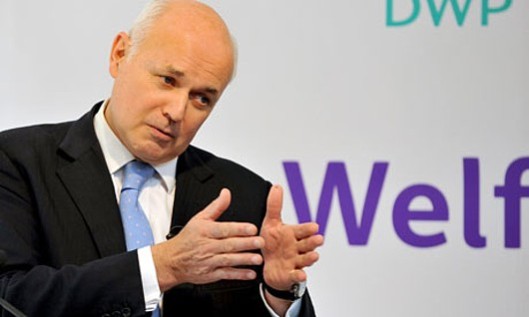 Talent deficit: Iain Duncan Smith wrote a poorly-received novel called The Devil’s Tune – and many may argue that his entire tenure at the DWP has been spent ‘on the fiddle’.

Labour frontbencher, sadist and closet Tory Liam Byrne has been preparing to take over the Department for Work and Pensions – by practising his future policy on current incumbent Iain Duncan Smith.

That’s right – instead of suggesting IBS should go back to the dole queue that he got married to escape, Byrne has told the Work and Pensions Secretary to “spend more time with his novels”.

This is of course an act of hideous cruelty – not just on LieDS, who deserves it, but also on the general public, if Mr… Smith accepts the advice.

His one published work of fiction, The Devil’s Tune, was released in 2003 and its uniformly negative reception may be taken as proof that publishers are more interested in who an author is than in whether they can write.

The stated reason for Mr Byrne to want to foist Iain Ducking-Out-Of-The-Dole-Queue’s writing on an unwilling public is the failure of four key initiatives that were said to have been set up to help the unemployed.

A Telegraph report said representatives of the Secretary-in-a-State said Mr Byrne’s remarks were a “compliment” as they suggest his welfare reforms are a threat to Labour.

This is correct in the literal sense; they are indeed a threat to labour. It seems that under the current regime, anyone lucky enough to get a job does so in spite of the system rather than with help from it.

Smith’s spokesman (apparently he is no longer able to speak for himself; this does not bode well for his writing) said his reforms were “hugely popular”, which is partially true. Unfortunately they are only popular with people who have not been subjected to them and who don’t know what they mean.

Repeating one of the many falsehoods for which the DWP now has a well-deserved reputation, he added that the Labour Party opposes the benefit cap. In fact, Labour supports a cap – but not the unjustified level at which the government has set it for families.

I refer you to the review of The Devil’s Tune by John Sutherland, Lord Northcliffe Professor of English Literature at University College London in November 2003, when his review was published in The Guardian: “Ask someone, said Tolstoy, ‘Can you write a novel?’ and – most likely – they will reply, ‘I don’t know; I’ve never tried’. They wouldn’t say the same if you asked them if they could play the violin. IDS has tried fiction. And high-political office. He should have stuck to the fiddle.”

Judging by his record since 2010, many may say he did.