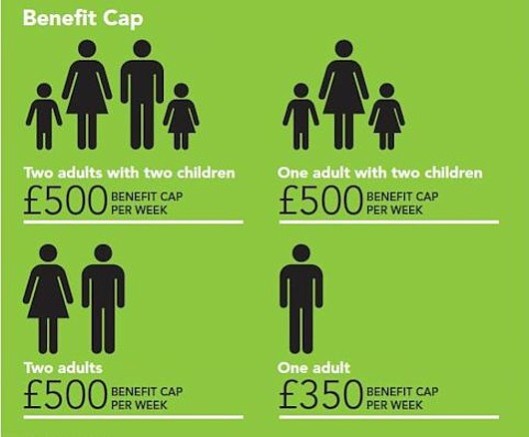 The long-feared roll-out of the benefit cap happened today. There has been a great deal of shouting about it from all sides, but it is possible to get a balanced view – by linking news articles from opposing sources such as, say, New Statesman, the BBC and the Daily Mail.

The benefit cap is one of the Coalition’s most popular policies – not the ONLY popular policy; believe it or not, a sizeable proportion of the population think Cameron and Co are doing a good job. New Statesman quotes a YouGov poll in which 79 per cent of people, including 71 per cent of Labour voters, support the cap – with just 12 per cent opposed. The Mail quotes Ipsos Mori, whose poll states 74 per cent support the cap.

We’ll start with the Statesman, which gives us the facts that Iain Duncan Smith – architect of the policy – won’t want people to know:

“The claim on which the policy rests – that a non-working family can be better off than a working one – is a myth since it takes no account of the benefits that an in-work family can claim to increase their income. For instance, a couple with four children earning £26,000 after tax and with rent and council tax liabilities of £400 a week is entitled to around £15,000 a year in housing benefit and council tax support, £3,146 in child benefit and more than £4,000 in tax credits.

“Were the cap based on the average income (as opposed to average earnings) of a working family, it would be set at a significantly higher level of £31,500. The suggestion that the welfare system “rewards” worklessness isn’t true; families are already better off in employment. Thus, the two central arguments for the policy – that it will improve work incentives and end the “unfairness” of out-of-work families receiving more than their in-work equivalents – fall down.

“2. It will punish large families and increase child poverty

The cap applies regardless of family size, breaking the link between need and benefits. As a result, most out-of-work families with four children and all those with five or more will be pushed into poverty (defined as having an income below 60 per cent of the median income for families of a similar size). Duncan Smith has claimed that “at £26,000 a year it’s very difficult to believe that families will be plunged into poverty” but his own department’s figures show that the poverty threshold for a non-working family with four children, at least two of whom are over 14, is £26,566 – £566 above the cap. The government’s Impact Assessment found that 52 per cent of those families affected have four or more children.

“By applying the policy retrospectively, the government has chosen to penalise families for having children on the reasonable assumption that existing levels of support would be maintained. While a childless couple who have never worked will be able to claim benefits as before (provided they do not exceed the cap), a large family that falls on hard times will now suffer a dramatic loss of income. It was this that led the House of Lords to vote in favour of an amendment by Church of England bishops to exclude child benefit from the cap (which would halve the number of families affected) but the defeat was subsequently overturned by the government in the Commons.

“The DWP has released no official estimate of the likely increase in child poverty but a leaked government analysis suggested around 100,000 would fall below the threshold once the cap is introduced.

“3. It will likely cost more than it saves

“For all the political attention devoted to it, the cap is expected to save just £110m a year, barely a rounding error in the £201bn benefits bill. But even these savings could be wiped out due to the cost to local authorities of homelessness and housing families in temporary accommodation. As a leaked letter from Eric Pickles’s office to David Cameron stated, the measure “does not take account of the additional costs to local authorities (through homelessness and temporary accommodation). In fact we think it is likely that the policy as it stands will generate a net cost. In addition Local Authorities will have to calculate and administer reduced Housing Benefit to keep within the cap and this will mean both demands on resource and difficult handling locally.”

“4. It will increase homelessness and do nothing to address the housing crisis

“Most of those who fall foul of the cap do so because of the amount they receive in housing benefit (or, more accurately, landlord subsidy) in order to pay their rent. At £23.8bn, the housing benefit bill, which now accounts for more than a tenth of the welfare budget, is far too high but rather than tackling the root of the problem by building more affordable housing, the government has chosen to punish families unable to afford reasonable accommodation without state support.

“The cap will increase homelessness by 40,000 and force councils to relocate families hundreds of miles away, disrupting their children’s education and reducing employment opportunities (by requiring them to live in an area where they have no history of working).

“5. It will encourage family break-up

“Duncan Smith talks passionately of his desire to reduce family breakdown but the cap will serve to encourage it. As Simon Hughes has pointed out, the measure creates “a financial incentive to be apart” since parents who live separately and divide the residency of their children between them will be able to claim up to £1,000 a week in benefits, while a couple living together will only be able to claim £500.”

The BBC opened with a much sunnier perspective that has caused Vox Political to send a query to the UK Statistics Authority.

According to the report, “More than 12,000 people have moved into work after being told about the benefits cap, the government says.” Oh, really?

“The Department of Work and Pensions (DWP) said that 12,000 claimants have found jobs over the last year, after being contacted by job centres,” the BBC report went on. “The job centres warned them they might have their benefits capped if they did not find employment.”

Didn’t Iain Duncan Smith get into trouble only a few months ago, for reporting that 8,000 people had moved into work after being told about the cap?

Only last week, his own officials told the Work and Pensions committee he had ignored small print in their reports, stating clearly that he could not use the figures to claim that any “behavioural change” had taken place.

Vox‘s article last week quoted Dame Anne Begg, who asked: “So no-one checking the written articles from the Secretary of State – from the statisticians’ point of view – actually said ‘Secretary of State – if you look at the little footnote… It says that you cannot interpret that these people have gone into work as a result of these statistics’. Nobody pointed that out?“

John Shield, Director of Communications at the DWP, responded: “In this instance it did involve the press office. I’m just trying to be clear that not everything that comes out of the department will go through us – particularly when there are political ends.”

In other words, the Secretary of State ignored his advisors to make a political point that had no basis in fact. He lied to the public.

How do we know he isn’t doing it again?

A letter to Mr Dilnot is in order, I think.

Finally, to the Daily Mail, where it was reported that “Cabinet minister Iain Duncan Smith today accused the BBC of launching a ‘politically-motivated’ attack on government plans to cap benefits at £26,000.

“The Work and Pensions Secretary accused the Corporation of using ‘lots of little cases’ to claim that limiting welfare payments would not get people back to work.”

Unfortunately for Mr… Smith, his story unravelled further down the piece, when it was revealed that he told the nation that HIS evidence is right because it’s from people working in Jobcentres: “This is advisers, they talk to me… I talk to people actually in the Jobcentres.”

That’s anecdotal, and may not be used to suggest a national trend. He is using lots of little cases to claim that his cap will work.

So we go from the cold, hard facts, to the comforting fantasy, to the shattering of the Secretary-in-a-State’s temper on national radio when the flaws in his scheme were exposed.

Mail readers, in that paper’s ‘comment’ column, seem to have supported his viewpoint – despite the facts.

Will their opinions change when the horror stories start appearing – or will they stick their fingers in their ears and scream, “La la la I’m not listeniiiiiing!” – as Mr… Smith did (figuratively speaking) on the Today programme?